Reinsurance increasingly the cheapest form of capital: JLT Re

The steady fall in the cost of reinsurance coverage has now typically made it the cheapest and most efficient form of contingent capital, when compared to ceding companies equity, debt and own capital, according to a new study from JLT Re.

The reinsurance broker has published a detailed look at the cost and efficiency of reinsurance capital, which suggests that by strategically making use of efficiency reinsurance ceding companies can increase their franchise value and improve their regulatory capital positions.

However, despite the efficient cost and performance of reinsurance capital within the overall re/insurance capital model, carriers are not all taking up the opportunity to become better protected or to use reinsurance more strategically, according to the report.

David Flandro, Global Head of Analytics at JLT Re, explained; “Some buying behaviours could, at the moment, be described as counter-intuitive. Cedents’ recent purchases have not, on average, reflected a presumption of higher expected loss experience.

“Note 1 shows the simple average of cession rates of the top 20 global property and casualty (P&C) carriers from 1998. It clearly shows that the insurance sector is at a long-term cyclical low in terms of reinsurance buying.” 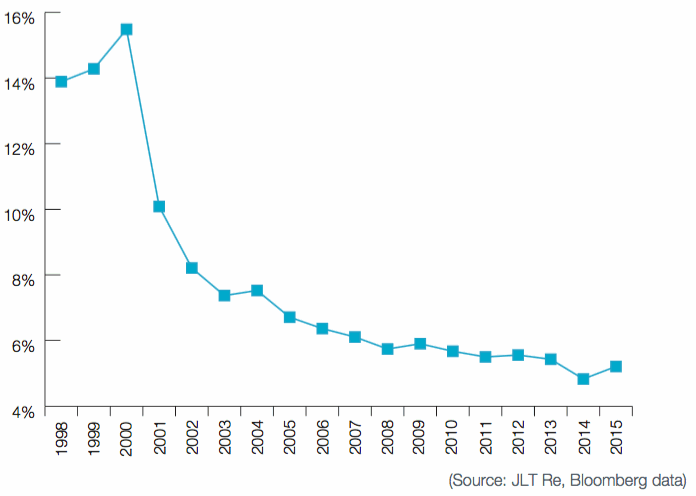 Analysis performed by JLT Re shows that the cost of reinsurance capital has fallen to a level considerably lower than most other forms. By taking advantage of this ceding companies can support new growth initiatives and pursue more profitable business, which ultimately can help them to better navigate today’s challenging operating environment.

The drop in reinsurance demand, as evidenced by the chart above, has come at the same time as the market has hit record levels of dedicated reinsurance capital, with the end result being the softening of the market and steady price declines seen over the last four years or more.

JLT Re believes the time has come that carriers need to seriously evaluate what forms of capital they are using and perform an analysis to compare their weighted average costs of capital (WACC) to the cost of reinsurance capital. 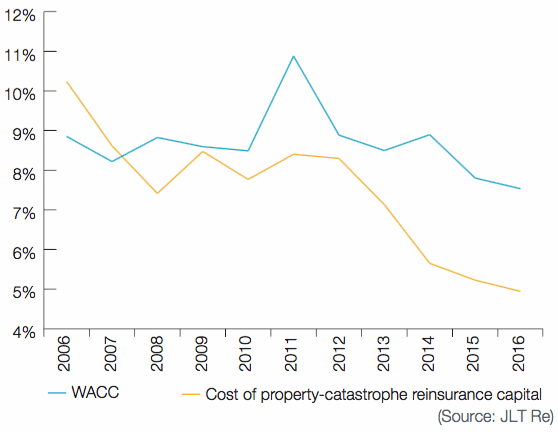 Mike Reynolds, Global CEO of JLT Re, commented; “We are encouraging clients to carefully re-examine strategic reinsurance purchases, not only in regard to earnings protection but also for value creation. Carriers with the foresight to exploit today’s cost effective reinsurance can help secure future profitability by preparing for the next unforeseen event(s) which could precipitate or accompany a turn in the market.

“Indeed, the disaster scenarios included in the report show how increased reinsurance spend can minimise volatility and protect cedents’ balance sheets in the event of major natural catastrophe losses, large man-made disasters, sudden macroeconomic changes and adverse reserve development issues, or a combination of all four.”

Over recent years cedents have pulled back dramatically from buying reinsurance, with the benign loss environment and priorities focused on optimising use of capital all resulting in a lesser focus on acquiring protection.

However, reinsurance capital is about more than just pure protection. It can be used to support growth, reduce reliance on other forms of capital, to optimise exposure and the underwritten portfolio, as well as simply to cap potential losses at a determined level in order to make future performance more predictable.

JLT Re believe that recent history has changed the way carriers look at capital, and the different forms of it. This is something we have been writing about for some time, that carriers have been going through a journey of understanding capital, the forms of it and their risk transfer needs.

As with the centralisation and rationalisation of reinsurance buying, that has been seen over the last two years, carriers often come out the other side of this with a new appreciation for the forms of capital which can help them the most and there has been some evidence of an uptick in buying from a number of companies that have undergone this transition.

David Flandro added; “The peaks and troughs of the underwriting cycle have long been core features of the reinsurance market. No two cycles are the same and market developments over the last five years have seemingly transformed the sector’s capital structure, potentially influencing the duration and volatility of future cycles. But the cycle is not dead.”

The softness of the reinsurance market suggests that risk transfer will remain a very cost-effective form of capital, compared to equity, debt and other contingent forms. But it is relative cost that is most important and right now the relative cost is at or near its lowest ever.

The entry and growth of third-party capital and ILS funds in the reinsurance market has contributed greatly to the efficiency of overall reinsurance capital, lowering its cost and helping to make it more widely available.

That trend is set to continue and will help to keep reinsurance pricing very competitive with other forms of capital. But in a negative interest rate policy (NIRP) world, reinsurance may not always be the cheapest form of capital and that means carriers should really snap up this opportunity to become better protected and to make reinsurance (be that traditional or alternative) a core of their capital models.

Mike Reynolds, summed up; “Reinsurance is now potentially the best-priced source of capital for most carriers. But market dynamics will not stand still forever and there are already emerging trends around reserving, capital inflows and the macroeconomic environment that could prove to be catalysts for future change.

“Reinsurance buyers can secure competitive advantages by anticipating cyclical change and JLT Re is committed to deliver its best-in-class advice and risk transfer products to support clients in managing market change.”

For cedents and carriers, now is the time to use highly efficient, cost-effective and competitively priced reinsurance capital as a capital optimisation tool.

While the cycle may remain and reinsurance pricing ebb and flow, and the relative costs of reinsurance capital compared to other forms of funding will change, future developments suggest that ultimately risk capital will become the most efficient form available.

If reinsurance capital is considered cheap today (while intermediation costs remain and there are multiple layers of cession between the risk and the ultimate source of capital), it can only become cheaper going forwards.

As capital markets techniques, such as securitisation, are combined with insurance technology (insurtech) to make the passage and transfer of risk to capital a considerably more efficient process, reducing the steps and layers in the value-chain.

The last decade or two have seen capital become more mobile and fungible, the next two decades may see the efficiency of capital heightened considerably more in the insurance and reinsurance sector.

This will benefit not just carriers but the insurance consumer as well, hence the efficiency of reinsurance capital is a positive step on the road to a better protected re/insurance industry and eventually the wider world.

« Older article 50% of ILS capital could be wiped out by 1-in-200 hurricane: Deutsche Bank