At that level, it puts 2021’s insured catastrophe losses some 58% higher than the ten-year annual average (69% above the long-term average) and makes 2021 the fifth year in a row of above average cat losses, the analysts explained.

Because of this, Jefferies analyst team anticipate many insurers and reinsurers finding that catastrophe claims from the year will exceed their 2021 catastrophe budgets, meaning a higher proportion of the losses are expected to fall to reinsurance capital sources, which would include insurance-linked securities (ILS). 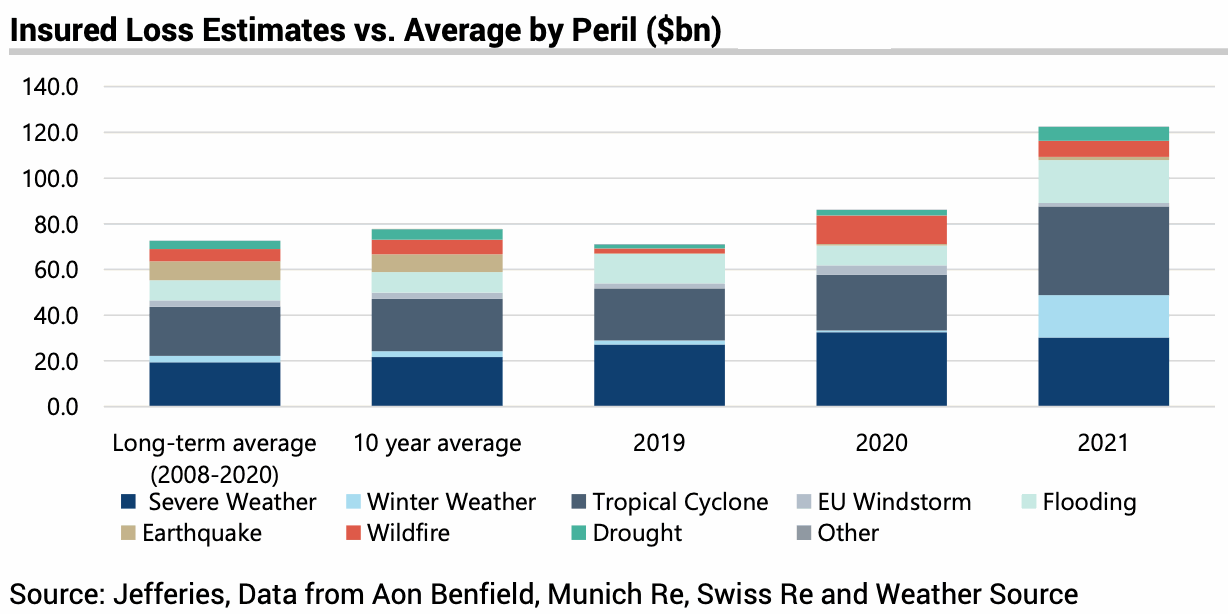 In 2021, it was the quantity of medium-sized losses, across multiple perils and regions, that drove insured catastrophe losses so far above average, the analysts explained.

The way losses fell and the fact more of them is anticipated to fall to reinsurance capital, is also a driver for reinsurance pricing through 2022, they also said.

“The cost of Hurricane Ida and the European Floods leads us to expect that a higher proportion of losses will fall on the reinsurers (relative to last year), leading us to conclude that reinsurance prices will rise more than insurance prices in 2022 (again unlike 2021),” the analysts wrote.

But also pointed out that the frequency of mid-sized severe and winter weather losses during the year also mean a heavy toll for insurers from 2021 catastrophes, as well.

“As such, we expect that both the insurance and reinsurance sub-sectors will report losses that exceed their catastrophe loss budgets,” Jefferies analysts conclude.

Interestingly, the analysts were citing a run-rate of $108.3 billion of insured catastrophe losses for the year in a December update.

But, because of loss creep and the increasing loss estimates that are being reported, Jefferies analyst team revised its estimate for the full-year up to $122.4 billion.

Jefferies analysts have added almost $3 billion to their estimate of insurance market losses from hurricane Ida, which now stands at $35.1 billion.

In addition, they have raised their estimate for the European floods by $2.7 billion, bringing it more into line with the industry at $12.9 billion.

The analysts also believe that US wildfire insured losses for 2021 will come out at around $6.5 billion now, which has been lifted by $1.9 billion.