Alternative reinsurance capital, so the capacity deployed through insurance-linked securities (ILS) structures including catastrophe bonds, has remained relatively flat since 2021, but with traditional reinsurance capital having shrunk, the ILS market’s share has increased, according to Gallagher Re.

This is even though the traditional reinsurance sector has been recording consecutive quarters of strong premium growth, as well as improving underlying profitability.

Total capital dedicated to the global reinsurance industry fell by around 11% at half-year 2022 to $647 billion, down from $729 billion, according to Gallagher Re, which the broker puts down largely to mark-to-market investment losses.

Traditional reinsurance capital is estimated at $554 billion, down from $636 billion, across tracked dedicated global reinsurers and regional players, Gallagher Re said.

On the other side of the market, alternative capital, so the ILS market’s capital base in cat bonds and other collateralized reinsurance structures, has stayed flat to the half-year 2022, at $94 billion, a level it has sat at since 2021. 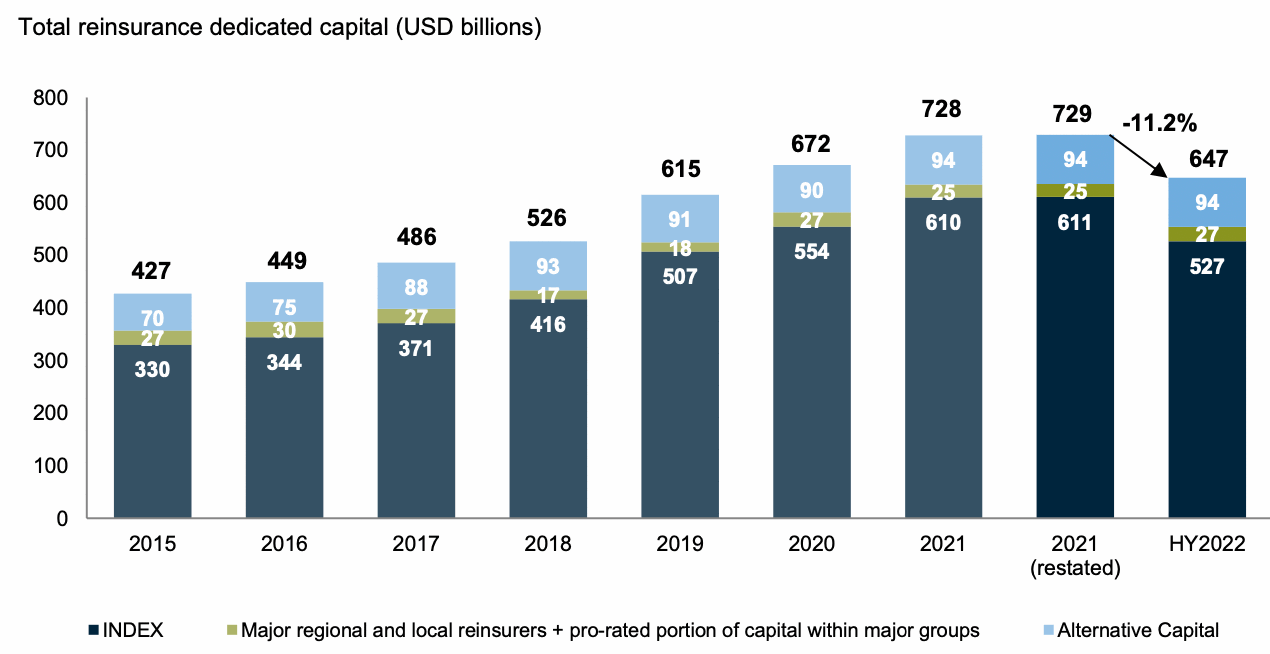 At that level, alternative capital now makes up roughly 15% of the total reinsurance sector capital, by Gallagher Re’s reckoning, which is an increase from the 13% it provided in 2021.

This change in percentage and the flat nature of ILS capital, helps to explain why ILS capacity has been in demand and also why the hardening in property catastrophe reinsurance has been so sustained in recent renewals.

With reinsurance demand increasing, traditional capacity down, plus many traditional writers or reinsurance pulling away from catastrophe and climate risks, the ILS market has an opportunity to double-down on what it does best, provision of reinsurance and retrocessional capital to support re/insurers peak peril exposures.

James Kent, Global CEO of Gallagher Re, commented, “Investment losses have hurt what was otherwise a more positive first half for reinsurers, and the steep headline decline in capital overstates the impact on economic capital positions. But the figures nonetheless show the need for continued vigilance given today’s macroeconomic and geopolitical uncertainties and the continuing debate over natural catastrophe exposures.”

On alternative reinsurance capital, Gallagher Re explains the flat nature of the capital is a little nuanced.

“After increases between 2019 and 2020, alternative capital and other forms of reinsurance capital have remained at virtually the same levels over the last two years,” the report states.

Adding, “We estimate little change from FY 2021 in non-life alternative capital, but we also acknowledge that this roughly flat trend is susceptible to foreign exchange volatility. This is because many investible assets are denominated in currencies hedged against the USD. As a result, any growth in the global investible assets may be offset by depreciation of their currencies against the USD (or vice versa), with an outcome of flat USD values reported.”

Going into more detail as to why this matters and can make measures of the ILS market more difficult to make, the reinsurance broker explained, “As investors hedge with a very short-term view, increased foreign exchange volatility increases their cost of hedging and reduces their risk appetite (and vice versa), which in turn impacts the aggregate reported numbers. The circular reference nature of volatility and investors’ demand adds complexity to global value appraisals.”