This is according to the latest data from rating agency AM Best and reinsurance broker Guy Carpenter, who together have been tracking global reinsurance market capital and capacity availability, across traditional and alternative, or ILS marketm sources, for nine years.

The pair explained that, “According to AM Best and Guy Carpenter’s latest estimates, dedicated capital in the global reinsurance segment was approximately USD 520 billion as of year-end 2020.

“This total is broadly split 80/20 between traditional and third-party capital, the latter almost unchanged in the last two years.”

Global dedicated reinsurance capital is now estimated to have expanded further, to reach approximately US $532 billion by this stage in 2021, helped by expansion of both traditional and ILS capital sides of the market. 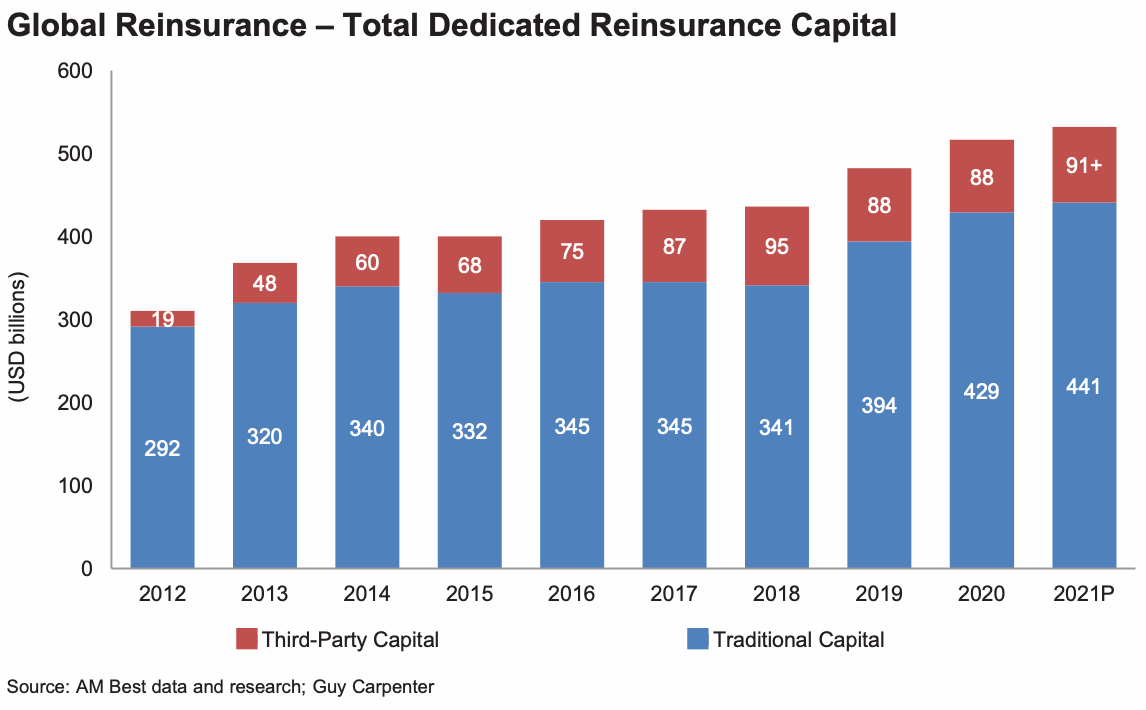 AM Best notes that the expansion of third-party capital, from dedicated ILS fund managers, reinsurers managing ILS fund strategies and other investment vehicles, plus direct ILS investor capital, had been slowing through recent years, but now a rebound is evident.

“Heightened claims activity in 2017 and 2018 highlights the different responses of traditional and third-party capital as would be expected, in line with their time horizons,” AM Best explained.

Adding, “Traditional capital acknowledged the need to reinforce their balance sheet positions to withstand their risks for the medium to long term, while third-party capital became more cautious as to the level of their participation in the market, stabilizing around the $90 billion mark the last four years.”

Sluggish pricing, trapped capital, loss creep, all issues that affected the ability of the ILS market to continue its fast rate of expansion after the peak catastrophe loss years of 2017 and 2018.

But, having dealt with many of the issues faced and emerged relatively unscathed by the COVID-19 pandemic, the ILS market has returned to growth and further expansions is likely.

AM Best said that, “Despite ongoing claims uncertainty, additional clarity of contract language, temporary rollover of capital, and a shift in focus toward higher-risk layers and retrocession are translating into renewed interest in the ILS market.”

Catastrophe bonds have seen an especially large resurgence of investor interest, given their more transparent and often predictable nature when it comes to losses threatening them.

AM Best noted that catastrophe bonds “dominance among ILS instruments continues to grow thanks to their liquidity.”

But also explained that renewed interest is now being seen in collateralized reinsurance.

Notice that in the chart on global reinsurance capital embedded above, AM Best and Guy Carpenter mark third-party reinsurance and ILS capital as $91 billion+, which suggests that the growth rate of ILS capital may have been even faster this year so far.

This is because “Total ILS capacity has become a bit more elusive over the past few years,” AM Best explained, especially given the way capital becomes trapped by losses or potential losses and can then be released back into circulation, depending on how those loss events develop.

As a result it is difficult to ascertain how much is available, or deployable, at any one point in time.

We’d also note that there are additional sources of ILS capacity coming into the reinsurance market from adjacent sources as well, plus it can be hard to track every third-party capitalised vehicle operated by an insurer or reinsurer these days.

Drivers of growth are the increasingly vital nature of ILS capacity to the global retrocession needs of reinsurers; the fact reinsurers continue to expand their ILS platforms, seeing it as partner capital rather than a competitor; plus, as AM Best rightly notes, the fact that for major pensions ILS remains an immaterial share of their overall portfolio allocations.

“The diversification benefits—although questionable in an increasingly correlated world—remain attractive as long as participation is relatively modest and the returns justify it,” AM Best explained.