The record level of catastrophe bond, or non-life insurance linked securities (ILS), issuance seen in the first-quarter of 2016 highlights the continued appetite institutional investors show for accessing ILS, as well as the appetite of cedents to access alternative capital, according to Willis.

WCMA recorded $2.015 billion of new non-life catastrophe bond issuance during the first-quarter of 2016, which it puts as a record for the market.

This is slightly below the $2.215 billion of catastrophe bond and ILS transactions recorded in the Artemis Q1 2016 Market Report, as we include the health insurance linked Vitality Re transaction from Aetna in our figures.

Bill Dubinsky, Head of Insurance-Linked Securities (ILS) at WCMA, commented on the record; “The headline figure shows that a record level of non-life ILS was placed during the first-quarter, highlighting the continued appetite for risk from investors and alternative reinsurance capital from ceding companies.”

WCMA recorded nine new non-life cat bond transactions and 13 tranches of notes, which reflects an increase in capacity of 35% compared to the brokers figures for Q1 2015. All of the first quarter issuances were issued on behalf of repeat sponsors, WCMA notes.

Outside of the lower risk and return Japanese cat bonds issued by Akibare Re and Aozora Re, WCMA notes that the remaining risk capital issued in Q1 2016 featured U.S. risks and had higher yields on offer. In fact, the Merna Re 2016-1 cat bond was the only U.S. peril issuance paying a coupon lower than 5%.

That reflects investor appetite as well, and a growing appreciation from cedents that they can leverage the cat bond market to take advantage of investor appetite for higher coupon bonds, a factor that has been reflected in the general reduction of multiples for cat bonds paying higher spreads.

Only one transaction in the first-quarter was a retrocession play, with French reinsurer SCOR sourcing multi-peril retro for its U.S. property catastrophe exposures. The rest of the transactions were sponsored by insurers looking for collateralised sources of reinsurance capacity.

So, could this record start to 2016 continue for the catastrophe bond and ILS market? Well Q2 so far seems a little quiet, with just one private cat bond and the latest Residential Re so far, but with the key mid-year renewals approaching we are sure to see a number of new U.S. peril exposed cat bonds emerge in the coming weeks.

Dubinsky of WCMA stated; “It is too early to say whether the strong Q1 issuance will translate to a record-breaking year.”

But with capacity generally abundant and ILS investor appetite high, while cedents appetite for alternative reinsurance capital continues to grow, whether a record or not, 2016 looks like it will experience another healthy year of ILS market issuance.

The WCMA report also contains insights into catastrophe risk modelling transparency and ILS fund valuation, as well as A.M. Best’s proposed BCAR revisions and the impact it could have on reinsurance and ILS demand. 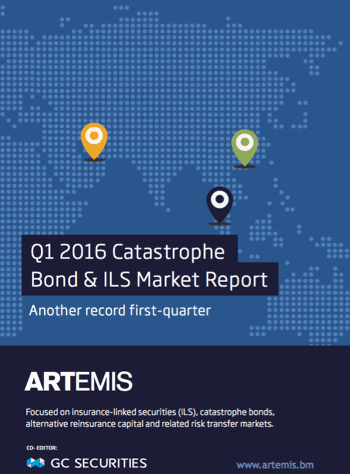