In 2015 only $37 billion or 40% of global catastrophe and man-made disaster losses were covered by insurance and reinsurance, according to Swiss Re, representing a coverage gap of 60% and presenting an opportunity to the industry.

2015’s global insured losses from natural catastrophe and man-made disaster events were significantly below average, with the $37 billion of insured losses less than 60% of the $62 billion ten-year annual average.

Despite the low-level of insurance and reinsurance losses, frequency of events was up, with the 353 disaster events recorded by Swiss Re’s sigma last year, 198 of which were natural catastrophes, the highest number in a single year according to the reinsurers records.

Severity, of course, remains the major threat to reinsurance layers, but as aggregates and multi-year contracts become the norm, it is vital that both reinsurers and ILS players factor in any increasing frequency of losses into their pricing and terms.

The fact that insured losses are so far below the average, even in a year that saw the highest ever number of catastrophe and disaster loss events, clearly demonstrates the insurance protection gap and the opportunity facing the insurance, reinsurance and ILS industry to cover more of these losses.

Global economic losses from both natural and man-made loss events were $92 billion in 2015, below 2014’s $113 billion and significantly below the ten-year annual average of $192 billion.

$80 billion of the economic loss was due to natural catastrophes, with the earthquake in Nepal causing the greatest damage, although largely uninsured. 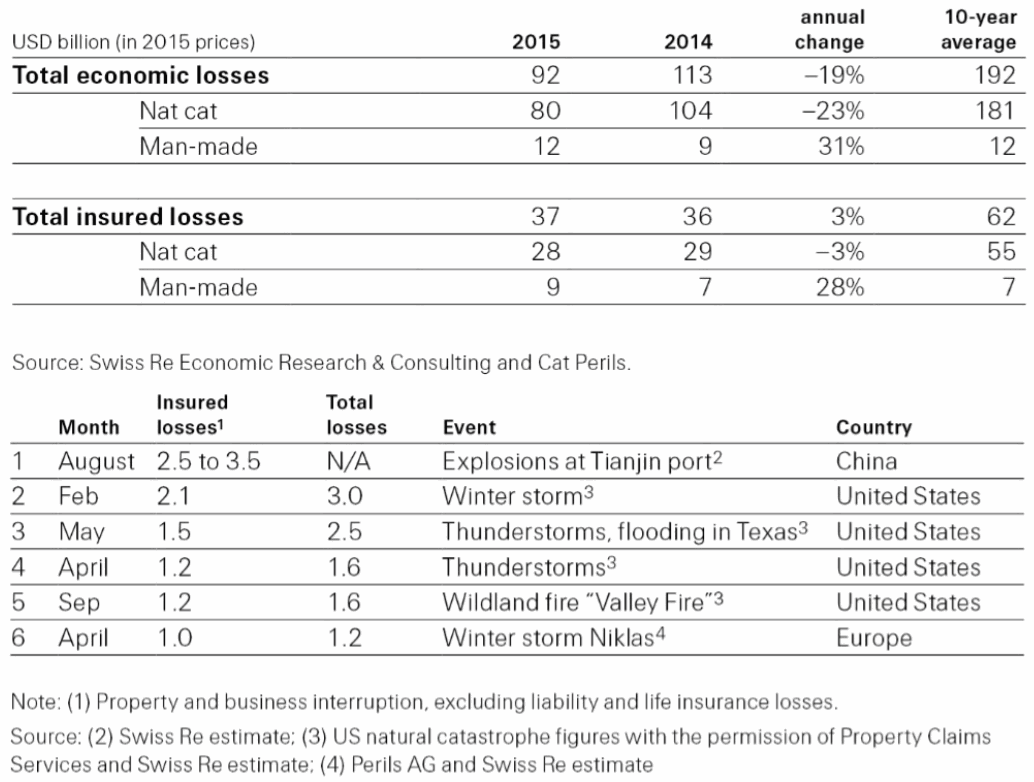 On an insured basis, the $37 billion of global losses break down to $28 billion of natural catastrophe insured losses and $9 billion of man-made losses. The Tianjin port explosions were the largest insurance loss event, also hitting reinsurance companies and some ILS funds, with an estimated property insurance loss of $2.5 billion to $3.5 billion.

The benign hurricane season in the Atlantic and Caribbean remains the main driver for insured losses being so far below average, once again. The biggest single loss in the U.S. and second largest globally was a winter storm in mid-February that resulted in an insurance industry loss of $2.1 billion.

Thunderstorms and floods in Texas were the third largest insured loss globally in 2015, with around $1.5 billion of insurance impact. Following that was another U.S. severe thunderstorm outbreak in April 2015, at $1.2 billion, the Valley Fire in California at $1.2 billion and then European windstorm Niklas which Swiss Re puts at $1 billion.

The frequency issue is interesting and there are a couple of factors that could have influenced it in 2015.

It perhaps reflects the growing penetration of insurance into regions which are more regularly affected by catastrophes and disasters, which is a positive. The opportunity to narrow the gap between insured and economic losses remains significant for re/insurers and the ILS market.

It also likely reflects the El Nino conditions around the world, resulting in greater incidence of catastrophe losses in some regions due to drought conditions, excess rainfall and more severe storms.

But as frequency rises, which many expect will be the norm as climate change influences the incidence of severe weather and natural catastrophe events, then insurance, reinsurance and ILS players need to both be aware (or wary) and factor this into their assumptions and modelling or pricing.

Heightened frequency in a year where events occur more regularly in areas where insurance penetration is high could result in unexpectedly high losses. The proliferation of aggregate reinsurance and ILS covers, as well as multi-year contracts and the effects and lower profitability of softened pricing, would all mean losses might be higher than in previous experience as well.

Again, this is something to be aware and wary of, ensuring that the potential for higher frequency of losses is factored into modelling, pricing, assumptions and forecasts.

The full Swiss Re sigma report on 2015 global insured catastrophe and disaster losses can be downloaded here.