Our latest report on the catastrophe bond and insurance-linked securities (ILS) market is available to download. The report, ‘Q4 2017 Report – Record 2017 issuance takes market to record size’, analyses a slightly above average fourth-quarter featuring $1.92 billion of issuance that took the outstanding market to a new all-time high 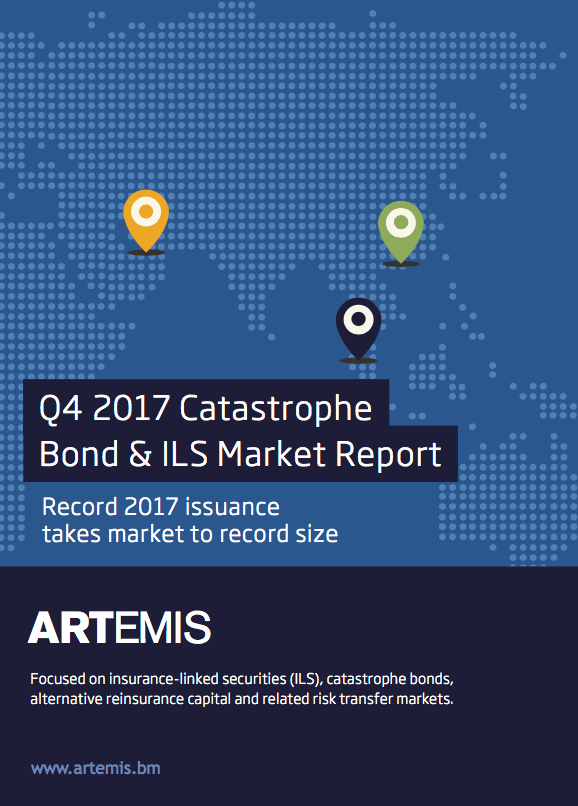 This report reviews the catastrophe bond and insurance-linked securities (ILS) market at the end of the fourth-quarter of 2017, analysing the new risk capital issued and the composition of transactions completed during Q4 2017, as well as reviewing the record-breaking year.

During the fourth-quarter of 2017 catastrophe bond and ILS issuance reached $1.92 billion, which is $146 million above the ten-year average for the quarter. Combined with more than $10.6 billion of issuance in the first nine months of the year, full-year 2017 issuance broke records, with roughly $12.6 billion of new risk capital brought to market.

As a result of this record issuance and despite the impacts of third-quarter catastrophe reinsurance losses, investors and sponsors remained attracted to the insurance-linked securities (ILS) space in Q4, helping the outstanding catastrophe bond and ILS market $31 billion for the first time at the end of 2017.

Overall, 13 transactions consisting of 22 tranches of notes came to market in the fourth-quarter, totaling the $1.92 billion of risk capital issued.

Seven of the transactions issued in the quarter were privately placed deals, amounting to $205 million of fourth-quarter issuance.

Roughly $1.2 billion, or 63%, of Q4 issuance came from repeat sponsors, as major insurance and reinsurance firms showed their commitments to the ILS and capital markets.

Each individual month of the fourth-quarter witnessed some level of catastrophe bond and ILS issuance. The majority of Q4 issuance occurred in November, which saw $845 million of issuance. The busiest month in terms of the number of transactions was December, thanks to an end of year flurry of private cat bonds, which saw nine deals completed amounting to $712 million of quarterly issuance.

Indemnity triggers dominated issuance during the fourth-quarter of 2017, continuing the trend for sponsors to look to the capital markets for indemnity coverage. Roughly $1.17 billion of indemnity coverage was secured from the cat bond market in the quarter, accounting for 61% of total risk capital issued.

Investors were able to take advantage of both geographical and risk diversification in the fourth-quarter, with no one peril dominating catastrophe bond and ILS issuance.

The catastrophe bond and ILS market has witnessed an impressive and unprecedented level of growth in 2017, driven primarily by the extremely active first half of the year, and supported by continued investor and sponsor appetite throughout the third and fourth quarters. Despite Q4 2017 issuance being relatively average, the market once again recorded outright growth, increasing by over $1 billion from the end of Q3.

In spite of insurance and reinsurance industry headwinds, investors and sponsors showed unprecedented interest in catastrophe bond and ILS opportunities in the first six months of 2017.

Furthermore, the high level of catastrophe losses experienced in the third-quarter, combined with the impacts of the California wildfires in the fourth-quarter, doesn’t appear to have dampened capital markets’ investors attraction to the ILS and reinsurance linked investments space.

At the end of 2017, the outstanding catastrophe bond and ILS market volume reached a new high of $31 billion, which, according to the Artemis Deal Directory, is over $4.2 billion larger than at the end of 2016.

For full details of the fourth-quarter, including a breakdown of the issuance by factors such as perils, triggers, expected loss, and pricing, as well as analysis of the issuance trends by month and year, and a review of 2017 activity, download your copy of Artemis’ Q4 2017 Cat Bond & ILS Market Report here.