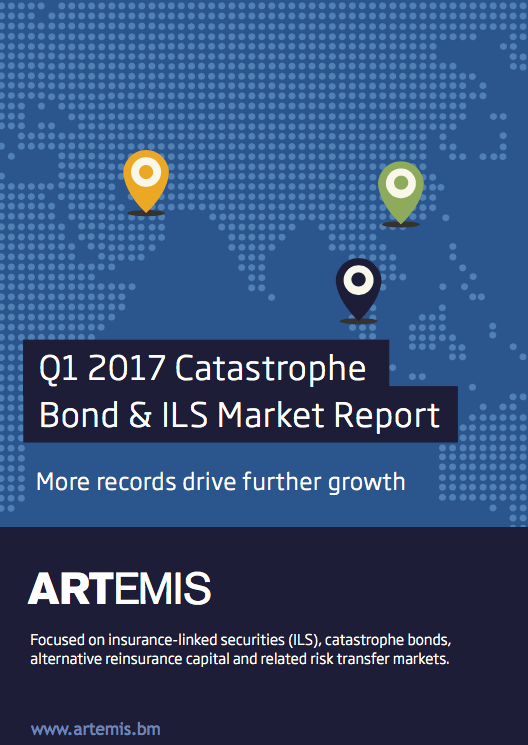 This report reviews the catastrophe bond and insurance-linked securities (ILS) market at the end of the first-quarter of 2017, looking at the record level of new risk capital issued and the composition of transactions completed during Q1 2017.

First-quarter catastrophe bond and ILS issuance once again broke records, with a huge $2.76 billion of new risk capital brought to market from 25 tranches of notes via 14 deals.

According to the Artemis Deal Directory this is the fourth consecutive year Q1 issuance has reached a new high, and in 2017 issuance was approximately $1.4 billion above the ten-year average.

More than half of the tranches of notes issued in the first-quarter were privately placed, amounting to approximately $891 million of total risk capital issued and underlining investor comfort and confidence with privately placed catastrophe bond transactions.

A diverse spread of sponsors came to market in Q1 2017, which includes repeat sponsors such as Allstate, State Farm and XL Catlin, as well as unknown sponsors. Encouragingly the quarter saw two new cat bond sponsors in Terra Brasis Re and ICAT Syndicate 4242.

Catastrophe bond and ILS investors were treated to a strong issuance pipeline in the opening three months of the year, and clearly continue to view the asset class as an attractive and diversifying, alternative investment that adds real benefit to a portfolio.

Catastrophe bond and ILS issuance in the first-quarter of 2017 surpassed $2 billion for the third year running, as the series of records for the beginning of the year continues.

The average transaction size was approximately $197 million across 14 deals, which is above the ten-year average size of $178 million, and six above the average number of transactions completed.

Q1 saw a mix of private and more broadly placed catastrophe bond transactions come to market, and the 14 deals recorded is the second most active first-quarter, in terms of number of deals, of the last ten-years.

Indemnity triggers continued to dominate issuance in Q1 2017, with sponsors securing $1.62 billion of indemnity protection, which is roughly 69% of the risk capital issued in the quarter that we have detailed information for.

A diverse range of perils came to market, offering ILS investors some opportunities for diversification during the quarter, and with a range of risk levels in the tranches of notes on offer the high levels of issuance have provided something for most cat bond investors.

The strongest opening quarter in cat bond market history, in terms of new risk capital issued, has helped to offset more than $2.3 billion of maturities during the quarter, enabling the market to achieve outright growth again.

The outstanding catastrophe bond and ILS market at the end of the first-quarter of 2017 now totals a record $27.19 billion, beating the previous record by $377 million, according to Artemis’ data.

Perhaps more impressively, the outstanding cat bond market now sits $680 million larger than it did a year ago, this despite very high levels of maturities and intense competition from the reinsurance market.

It’s clear that catastrophe bonds continue to offer both sponsors and investors benefits, over traditional reinsurance, and with the second-quarter already off to a strong start it looks like 2017 could approach record levels of annual issuance if the momentum can be maintained.

For full details of the quarter, including a breakdown of the issuance by factors such as perils, triggers, expected loss, pricing, and analysis of the issuance trends by month and year, download your copy of Artemis’ Q1 2017 Cat Bond & ILS Market Report here.