Realistic reinsurance RoE’s fall to 4.5%, challenges to continue: Willis Re

The realistic or underlying return on equity (RoE) of a group of reinsurance firms tracked by Willis Re fell to 4.5% in the first-half of 2016, as higher natural catastrophe losses and ongoing competitive threats continue to erode reinsurer profits.

Global reinsurance broking firm Willis Re, the reinsurance focused arm of global advisory, broking and solutions company Willis Towers Watson, has published its latest reinsurance market report today, in which it gives its outlook for the sector, in time for the 2016 Monte Carlo Rendez-vous.

The market remains extremely challenging, despite the profits reported which might suggest otherwise, with robust levels of capital in reinsurance, continued growth of the insurance-linked securities (ILS) market and alternative capital, as well as growing threats from new entrants, business models and Insurtech start-ups.

So traditional reinsurance capital remains on the rise and as a result so does the pressure to deploy it, a key driver of falling prices and rising competition in the reinsurance market.

Capital and competition have been driving down reinsurance rates and ultimately profitability, with reinsurers now said to be on the edge of profitability at this time.

Willis Re always looks at reinsurer returns on equity (RoE) and then dissects them, to reveal what it terms the underlying or realistic RoE, so when normalised for a more typical catastrophe load (which the broker says is roughly a 4% impact on RoE) and excluding any benefit provided by reserve releases.

This analysis is always interesting and perhaps the most revealing aspect, with respect to reinsurers profitability, is that once again the underlying RoE of the reinsurance sector seems to have declined over the first-half of 2016.

Willis Re explains that “Ongoing market pressures are manifesting themselves in a diminishing underlying Return on Equity (RoE),” which the full extent of is being masked by the use of reserve releases to boost results.

The Willis Reinsurance Index shows an average reported RoE of 8.3% for the sector, down from 10.4% a year earlier. One driver of this is higher catastrophe losses in the first-half of 2016, with the average combined ratio of the Index rising to 94.1%, up from 91.5%.

The subset of the Willis Reinsurance Index which discloses its catastrophe losses and reserve releases is where things get most interesting, with a reported RoE of 8.9%, down from 11% and a combined ratio of 93.7%, up from 90%.

With the more transparent reporting of this subset of the reinsurance industry, Willis Re calculates an underlying, or realistic, RoE of only 4.5%, down from 4.9% the year before. 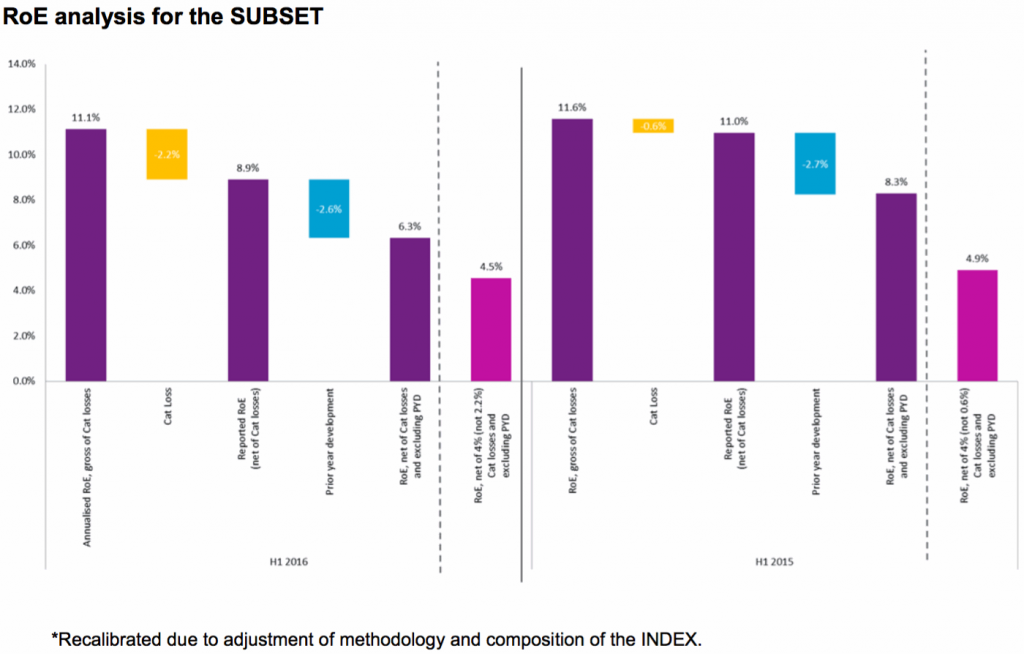 An RoE below 9% is low in reinsurance, but this seems to be the new norm. However this is only the norm while catastrophe losses remain low and while reserve releases are available to continue to boost results. Should things normalise, we could see a rapidly unprofitable reinsurance sector, where only a few players are truly making returns their shareholders would be satisfied with.

John Cavanagh, Global CEO of Willis Re, explained; “There is no doubt that market conditions remain challenging for reinsurers. As the latest Willis Reinsurance Market Report highlights, the industry’s return on equity continues to be flattered by strong support from prior year reserve releases.

“Despite this, the balance sheet strength of the market remains robust; reinsurers with significant balance sheet scale and breadth, and those which have reserved prudently will be best positioned to maintain profitability.”

While reserves are flattering results, Willis Re’s report notes that “On further detailed analysis, some evidence exists of slowdown in this area.”

That could suggest the realistic RoE of the reinsurance sector will diminish even further in the quarters to come, while market conditions remain so challenging and no large catastrophe losses occur enabling any increase in pricing.

The situation means reinsurers have to be innovative, they need to expand, enter new regions and lines of business, embrace alternative capital to help make their own capital more efficient, embrace technology and the Insurtech wave, become product specialists, improve customer service, design products customers really want and also acknowledge that this step-change to the business is likely permanent and that they have to adapt to maintain relevance, all while controlling expense.

That’s a lot to think of as Monte Carlo and the reinsurance conference season approaches.

Important to note however that Willis Re reported the full-year 2015 realistic reinsurance RoE as 3.4%, so the first-half of 2016 is up a little on that. But perhaps H1 is where the profit comes from and it will be interesting to see how the full-year 2016 compares.

« Older article ILS enlarges reinsurance, complements it, says SCOR. But is it in contest?