The way the reinsurance industry raises capital after a major loss has changed completely over the last decade, as the rapid entry of ILS capital after a catastrophe event is now an “established trend”, according to David Flandro, of JLT Re.

The dynamics in reinsurance remain dominated by the abundance of capital and broker JLT Re believes that dedicated reinsurance sector capital will hit a new record by the end of the first half of 2018, recovering strongly after the slight dip sustained last year due to the 2017 catastrophe losses. 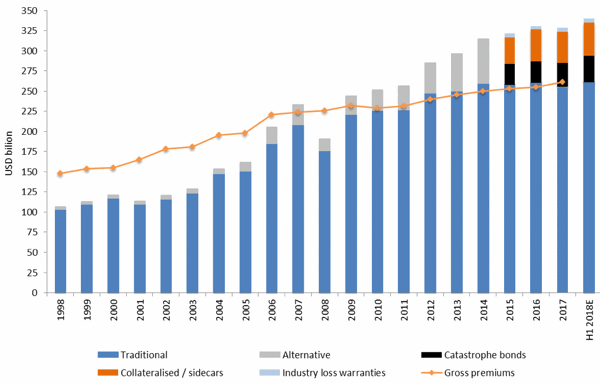 The result of this is a reinsurance market where there is continued supply and demand imbalance and a glut of capacity, which of course has the benefit of keeping prices down as well (which is a positive despite what you read).

David Flandro, Global Head of Analytics at JLT Re, commented, “Dedicated reinsurance sector capital has been very strong with growth of over USD 10 billion during the first half of 2018, following roughly USD 7 billion of new capital raised in the final four months of 2017.

“This affirms the now established trend of third-party capital rapidly entering the sector post-loss to fill the gap more or less immediately.”

The ability of the capital markets to reload quickly after their losses is actually vital in helping to maintain re/insurance market equilibrium and preventing a cycle that would otherwise be dominated by companies seeking payback for the losses they took.

In the new reinsurance market paradigm, where capital is efficient and flows more freely, while technology allows risks to be more accurately understood and priced, we should expect payback to become a much smaller component of the cycle.

It should of course still be a factor though and the ILS funds are as keen to get paid back after taking losses as their traditional reinsurer counterparts, but gone are the days of the 40% (and more) post-loss price hikes.

Of course the glut of capital and the ability of the capital markets to replenish lost capacity so quickly does also mean that competition ramps up at renewal time.

“The effects of this were evident in the intense competition at 1 June between alternative and traditional markets culminating in negligible rate rises despite Florida having recently suffered its first landfalling hurricane since 2005. This is a significant contrast to previous large-loss years which were all followed by significant – often double-digit – rate increases,” Flandro explained.

Market share is one of the factors that drove competition at this renewal as well, it was not just weight of capital. But the weight of capital could be considered a factor that drives reinsurers to compete so hard, rather than losing their position in a key property catastrophe market.

The more that dynamic continues over the years, the more likely it is that some markets (traditional or alternative) are going to find themselves writing business at levels their cost-of-capital cannot fully support, putting them at risk of being found out when losses (perhaps not the most severe either) strike.

But the fact is that the way capital flows into reinsurance has changed forever and with it the cycle, ability to secure significant payback on the levels seen in the past, and the competitive dynamic has adjusted along with this.

“It is now obvious that the means through which the sector raises capital at the margin have completely changed over the last decade, with huge implications for property-catastrophe reinsurance pricing and underwriting in particular,” Flandro said.