Australian headquartered global insurance and reinsurance group QBE has reported rising attachment points for some of its core reinsurance arrangements at the January 2022 renewals, while its reinsurance costs increased as well.

The company has significantly increased its catastrophe allowance for 2022, raising it to $962 million, up from the prior years $685 million.

This is in response to challenging loss years of late, which have seen the company burn through its catastrophe allowance and tap its reinsurance program arrangements in recent years.

QBE reported $905 million of catastrophe claims in 2021, equating to 6.6% of net earned premiums.

QBE Group CEO, Andrew Horton, commented, “I am pleased with the strong premium growth and significant uplift in underwriting margin. The strong result was achieved despite the heightened level of catastrophes during the year which remain a major issue for the industry.

“In targeting ongoing premium growth, we will remain vigilant in pricing adequately for an appropriate risk-adjusted return on capital, with claims inflation, catastrophe costs and overall portfolio volatility key areas of ongoing focus.”

QBE has renewed its core catastrophe reinsurance arrangements and said it has paid around $50 million more for the cover for 2022.

Other than that, the company said the reinsurance renewal was in-line with expectations, but QBE has been affected in similar ways to other major players, most evident in having to raise its attachment points and so retain more risk.

The main changes are a reduction in top or drop coverage, as limit for this layer was reduced to $225 million, but more importantly the attachment of the drop rose to $175 million at the renewals.

At the same time, coverage for the catastrophe top layer increased to $175 million, providing a little more protection at the top of QBE’s reinsurance tower.

QBE also purchased a new layer at the renewals, a $300 million ANZ top layer treaty, again boosting protection at the top of its tower.

But on the aggregate reinsurance side QBE goes into 2022 with a much higher attachment point of $800 million, up from $625 million in the prior year. The aggregate treaty continues to provide $500 million of cover and the per-event deductible remains at $10 million.

Some of this may be strategic, in terms of recognising the need for top layer coverage and also that the aggregate attachment may have been set to low, against a much higher catastrophe allowance.

But there may also be an element of market forces at work, as aggregate cover has been increasingly costly and hard to source, resulting in rising attachment points for many ceding companies in 2022.

QBE’s main catastrophe excess-of-loss reinsurance treaty continues to provide $2.1 billion of protection in 2022, while the attachment point is also unchanged at $400 million.

Details of QBE’s reinsurance renewal tower for 2022 can be seen below: 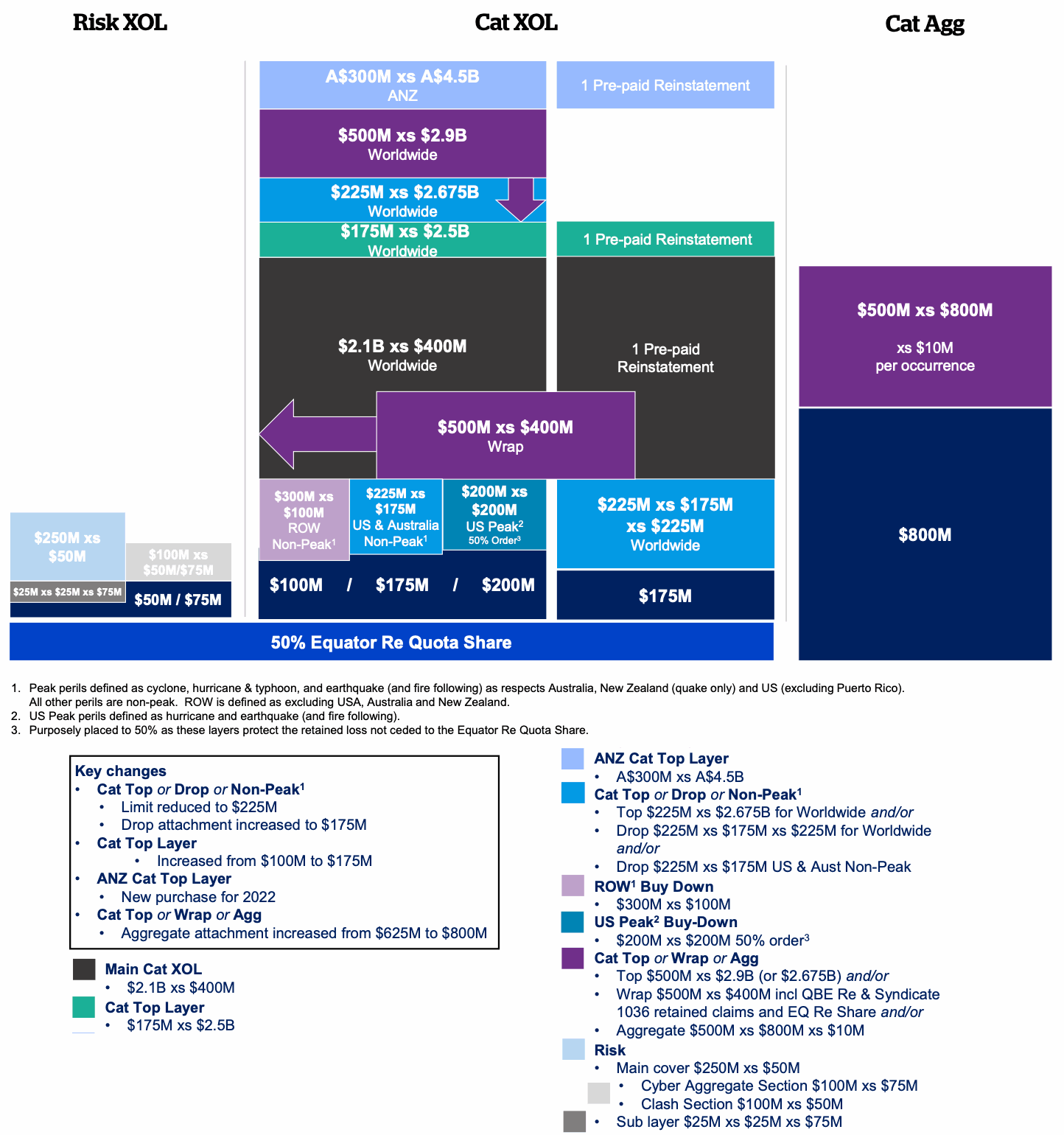 This reinsurance renewal outcome for QBE is not surprising.

The re/insurer is clearly trying to structure its tower to provide better financial support for loss years such as we’ve seen in the last few, as well as to dovetail with its now much higher catastrophe allowance.

In the hardened reinsurance market, the increased costs are not unexpected and given the growth in the program at the top, the renewal outcome actually looks quite favourable for QBE.