Australia headquartered global insurance and reinsurance firm QBE has increased the top of its main catastrophe reinsurance tower to $3.4 billion, with the company saying its renewal came in at a premium rate increase of under 5%, but restructured things slightly to account for heightened catastrophe frequency.

QBE said this morning that its January 2021 reinsurance renewal was “placed broadly in line with expectations,” while the company said that terms were actually “slightly better” than it had planned for.

As a result, the reinsurance renewal “strikes an appropriate balance between cost, capital and earnings volatility protection,” QBE explained.

Key facts in the renewal include the increase in the top of the main per-occurrence catastrophe reinsurance tower to $3.4 billion, up $100m on the prior year program.

However, at the same time QBE will retain a little more risk than last year, as its North America catastrophe retention has lifted to $200m, up on the $150m it was set at in the prior year. Important to note though that this retention had been $400m at the start of 2020, but lowered in April as the pandemic took hold.

The non-peak catastrophe retention for the US and Australia has also been lifted to $175m, up from the $125m in 2020, while the retention for all other non-peak perils remains at $100m for 2021.

QBE’s per-risk excess-of-loss reinsurance has been renewed on similar terms to the maturing cover, as too has the Equator Re 50% quota share, while divisional per risk and catastrophe retentions also remain largely unchanged, the company said.

$2.1 billion, excess of $400m, of the main catastrophe reinsurance tower is structured on a multi-year basis and QBE notes that this has helped the company to avoid too high a price increase, as it “limited the risk adjusted premium rate increase to less than 5% while the overall increase in reinsurance spend on the Group’s XOL reinsurance program was ~$30M or ~10%.”

Likely in response to this, QBE also noted that some portions of its renewed per risk XOL and main catastrophe reinsurance treaties have been placed for 24 months at this renewal, so extending the multi-year coverage it benefits from.

As a result of the new reinsurance program structure, but also as “to allow for continued heightened catastrophe frequency” QBE said that it has increased its natural catastrophe allowance for 2021 to $685m, up from $550m in 2020.

Despite all the changes in the reinsurance program, QBE also noted that for 2021, “the probability of exceeding the Group’s increased 2021 catastrophe allowance is lower than in 2020.”

QBE Interim Group CEO, Richard Pryce commented on the renewal, “I am pleased that we have renewed the Group’s reinsurance structure broadly consistent with the expiring program and at terms slightly better than budget. The reinsurance renewal (including increased catastrophe allowance) has been factored into our pricing models and we remain confident of driving appropriate margin expansion in 2021.” 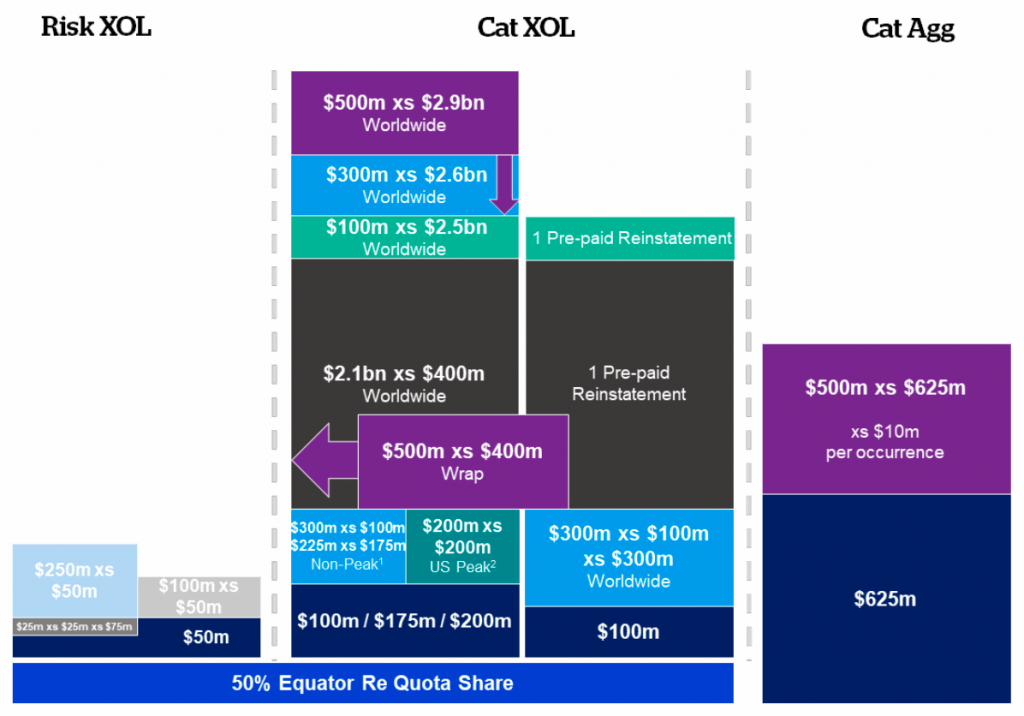