Q1 catastrophe frequency & losses the highest in a decade – PCS

PCS reported earlier this year that 2015 was the most active year for catastrophe events across the U.S. since 2007, and the firm’s first-quarter 2016 catastrophe report reveals a continuation of the trend as catastrophe frequency and severity intensified during the quarter.

Catastrophe activity across the U.S. and Canada during the first-quarter of 2016 resulted in insured losses of $3.8 billion, up from the $3.6 billion recorded a year earlier, according to Property Claim Services (PCS).

The firm recorded 13 PCS-designated catastrophe events during the period, an increase of more than 40% compared with the same period in 2015, underlining the dramatic rise in frequency of cat events during the first three months of the year. 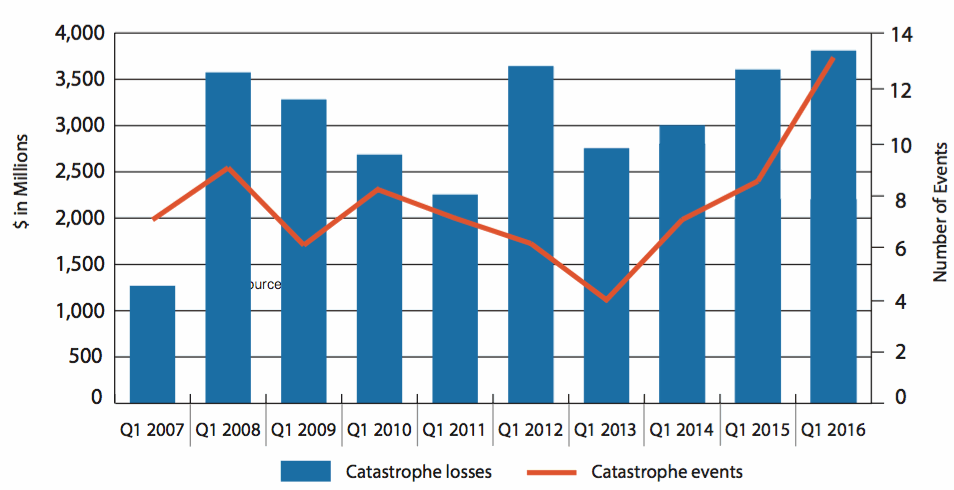 The above chart shows that Q1 2016 insured losses from PCS-designated cat events across the U.S. is above the ten-year (2007-2016) average of $3 billion, and the number of events is significantly higher than any year in the last decade.

It’s important to note that PCS’ numbers only include loss events above a certain size and are based on actual reported claims from insurers, so often the estimates can be a little lower than the figures quoted by other insurance or reinsurance organisations or companies.

“The first quarter of 2016 was the worst first quarter in a decade in terms of catastrophe frequency and severity. The first quarter is usually mild, though, since the major perils are hail and winter storm. They usually don’t create the large insured losses that events like hurricanes and earthquakes can,” said PCS.

“However, we did see a continuation of trend of increased catastrophe event frequency, with the number of first quarter events far above the ten-year average,” added PCS.

Frequency of catastrophe events is something that both reinsurance and insurance-linked securities (ILS) players need to be aware of, especially as aggregate covers have proliferated in recent years.

A higher than normal frequency and severity of U.S. catastrophe losses in Q1 2016 could mean erosion of aggregate reinsurance layer deductibles and some minor, attritional losses to certain private ILS, collateralised reinsurance and even vehicles such as reinsurance sidecars.

$3.8 billion of insured losses across the U.S. in the first-quarter is unusually high, and the total could actually creep higher still as two events that occurred late in the quarter are still being investigated.

The state of Texas was battered by hailstorms throughout the first-quarter, with PCS stating that the largest event of the period took place in the region and resulted in insured losses of $1.1 billion. In total, the state experienced five cat events, which resulted in an estimated insured loss of $1.9 billion, according to PCS.

This was the only state to witness insured losses exceed the $1 billion mark during the quarter, with California ($240mn), Illinois ($210mn), and Louisiana ($200mn) experiencing the next highest volumes of losses.

The table below from PCS lists the ten most catastrophe-affected states during Q1 2016. 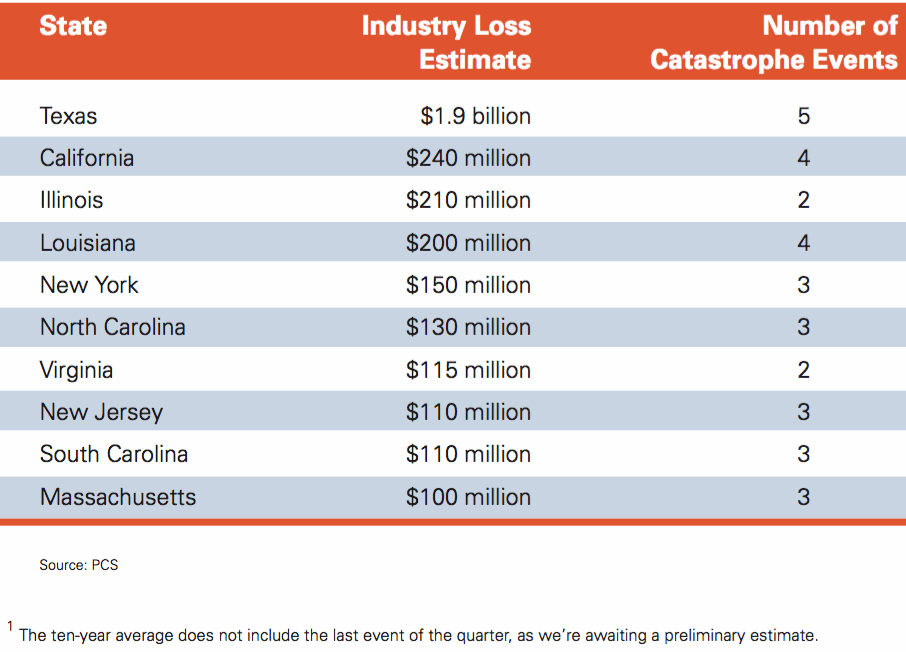 PCS highlights the standout storm of the quarter that impacted 20 states across the U.S., causing losses of $2.1 billion, adding that the “polar vortex was responsible for the bulk of first-quarter losses, accounting for more than $1.5 billion across 16 states.”

In line with 2015 the majority of insured catastrophe losses in Q1 2016 came from personal losses, at 69%, followed by auto losses at 21%, and commercial losses at 11%, according to PCS and highlighted in the chart below. 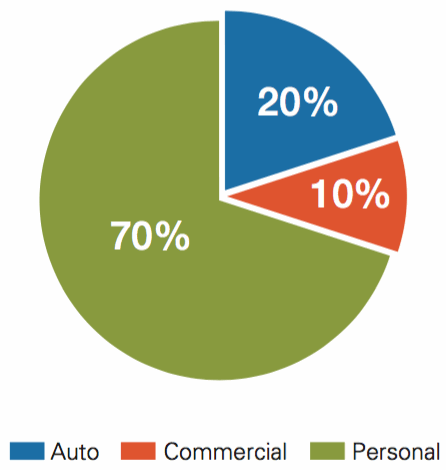 The first event remains under review, notes PCS, a winter storm that has a preliminary loss estimate of C$25 million ($19.9mn) and impacted parts of Ontario, New Brunswick, and Quebec.

The second event also struck Ontario towards the end of the quarter, and PCS has given the winter storm a preliminary insured loss estimate of C$40 million ($31.9mn).

Data from PCS throughout 2015 and so far in 2016 points to a continued rise in the frequency and severity of smaller events that typically aren’t too much for re/insurers to worry about.

However, as an increasing number of these smaller, perhaps attritional, catastrophe events take place, the aggregation of losses at times of limited profitability might start to diminish the earnings power of some companies in the coming months.

Furthermore, should a large loss event or two take place, adding to the pressures of an aggregation of losses from smaller events, then some in the space could really start to see results take a turn for the worse in the coming months.

Again, this is reminder that companies shouldn’t get complacent in light of a benign large loss environment, as clearly, when a cluster of smaller events takes place the losses can easily creep in to the billions.

Discipline remains key in the challenging reinsurance marketplace, and reinsurers, insurers, and insurance-linked securities (ILS) players would do well to prepare for when losses do start to normalise somewhat, especially if the frequency and severity of typically smaller events continues to rise.