Private insurance-linked securities (ILS) transactions have flourished in recent times, underlined by the consistent growth of the collateralized reinsurance and cat bond lite sub-sectors, where investors can access higher yields, according to Twelve Capital.

While the catastrophe bond market again reached new heights at the end of 2015, finishing the year with total outstanding capital at a record $25.96 billion, following another year of outright growth, the rise of private ILS deals was also evident during the period.

“For many institutional investors, the underlying illiquidity of 12 month risk periods is not a concern when they are compensated by the collection of attractive premiums during this relatively short timeframe,” says the firm.

Underlining this point, the chart below, provided by Twelve Capital reveals how as at Q4 2015, investors typically received a higher return for private ILS deals when compared to a traditional 144A cat bond. 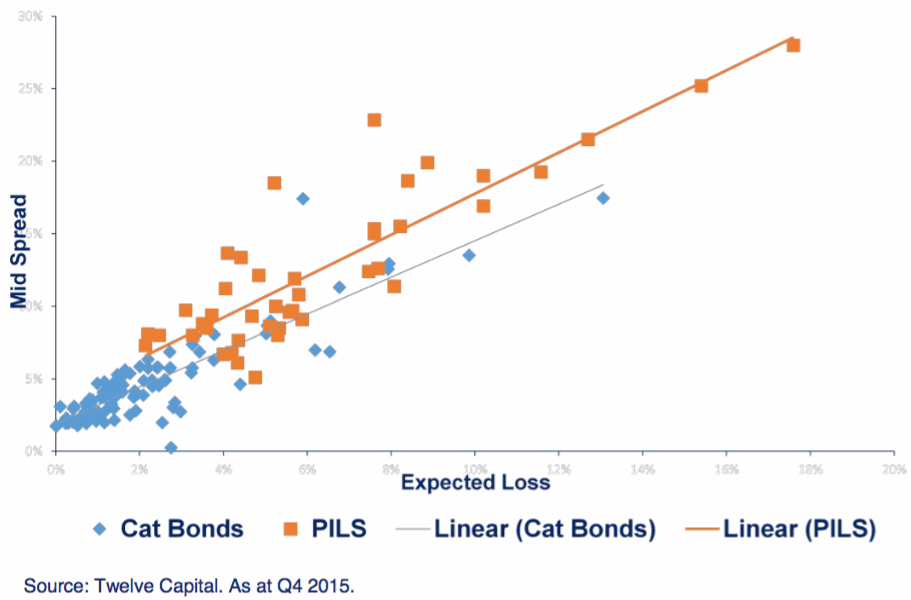 “At the time of the January 2016 renewals, Twelve Capital’s investors generated an illiquidity premium of around 1.2% compared to the total universe of Catastrophe Bonds,” explains the company.

There has been a trend within the third-party reinsurance capital space towards more private ILS deals in recent times, as they can offer better investment terms and conditions, and higher premiums than traditional ILS.

Furthermore, as investors have become increasingly sophisticated and improved their understanding of the ILS sector as a whole, private ILS deals are increasingly used as an uncorrelated stand-alone investment, or one that compliments a traditional cat bond issuance.

A key benefit for investors of both catastrophe bonds and private ILS transactions is the potential for attractive risk-adjusted returns that are largely uncorrelated with the broader financial markets.

But private deals do tend to offer investors access to a wider range of risks as well, including aviation, mortality, crop, terrorism, and others, again highlighting the diversification benefits, and improved returns of risks that were previously inaccessible.

Artemis reported late last year how the cat bond lite sector had again reached new heights in 2015, as issuance levels by the end of Q3 had already surpassed the total volume for full-year 2014.

As the asset class continues to mature and investors and sponsors alike grow their understanding and appetite, it’s likely the private ILS sub-sector will continue to flourish as more ILS capital is deployed directly into private collateralised insurance and reinsurance deals.

With more and more insurers and reinsurers waking up to the need to facilitate the wealth of alternative reinsurance capital in some form, either as a stand-alone issuance or as a compliment to reinsurance programmes, the collateralized reinsurance market and other private ILS areas could see continued growth in the coming years.

Furthermore, as the insurance and reinsurance industry remains awash with third-party capital, helping to drive, and keep rates down, ILS investors and market participants could increasingly look to the private ILS segment as a means of generating higher returns, which perhaps aren’t currently achievable in the competitive, price-pressured re/insurance landscape.