So far this year, 21 privately placed catastrophe bond transactions have been issued with a combined value of more than $672 million, which is almost double the volume witnessed for the entirety of 2020, as shown by the Artemis Deal Directory.

A private placement, or cat bond lite transaction offers both investors and sponsors with a more streamlined, low-friction and more cost effective means of accessing cat bond-backed reinsurance protection from the capital markets.

The first private deal we have on record came to market in 2011 and since then, annual issuance levels have varied but managed to stay above $350 million in each year since 2014, reaching a high of $997.2 million in 2017.

However, with the help of a particularly large private cat bond placement in the second-quarter of this year, the $250 million Artex SAC Limited deal from an unknown sponsor, 2021 cat bond lite issuance has already reached $672.9 million, as at August 19th.

The chart below shows annual private cat bond issuance over the past five years. 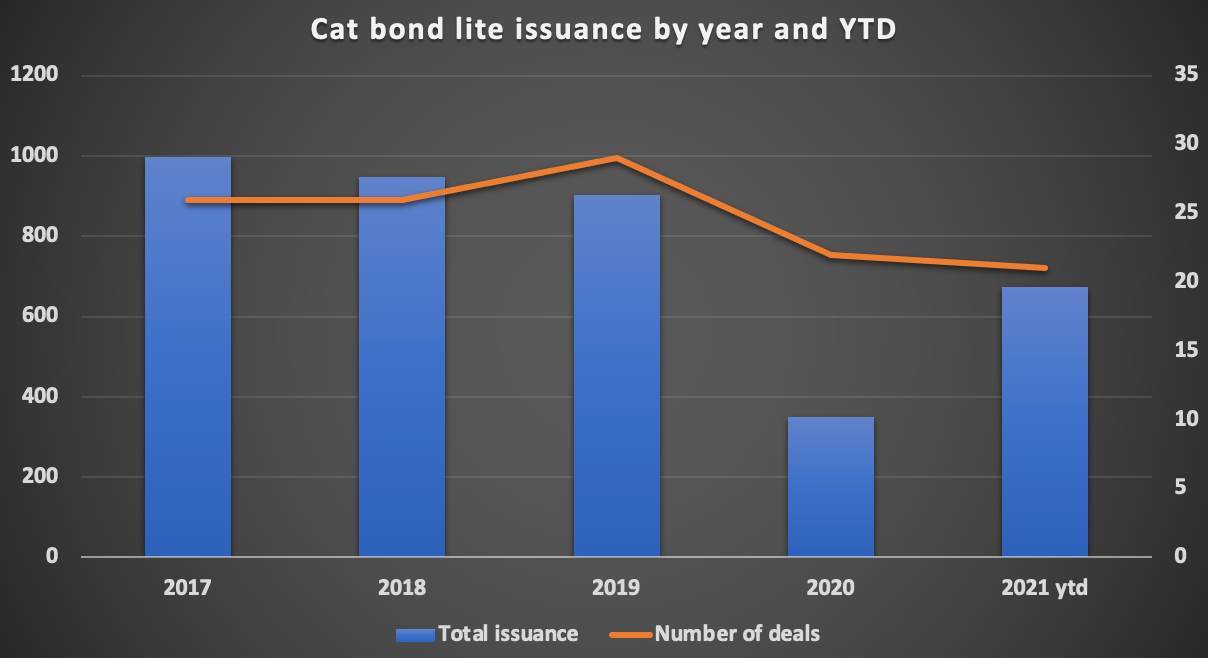 After the record level of private issuance seen in 2017 of almost $1 billion, 2018 is the second most active year for the market, in terms of risk capital issued, at $947.8 million.

Cat bond lite issuance dipped in 2019 when compared with the prior year, but remained robust at more than $903 million.

The $672.9 million of cat bond lite issuance seen so far in 2021 came from 21 transactions, with an average deal size of roughly $32 million.

Despite annual issuance being lower in 2020, this still came from 22 individual transactions.

With cat bond lite issuance already almost double what it was last year and higher than in 2019 over the same period, 2021 appears on track to be another bumper year for this part of the catastrophe bond sector.

Only time will tell if annual issuance once again breaches the $900 million mark, and whether this could be the first time in the market’s history that private placements amount to more than $1 billion in a single year.

At the same time, ILS funds continue to utilise private cat bond issuance as a way to securitize reinsurance deals for use in their catastrophe bond fund strategies.

You can break down the issuance we’ve recorded by type, including property cat bonds, private cat bond deals, other lines ILS and mortgage ILS, using our charts.