The trend towards reinsurance price stabilisation and the convergence of traditional and ILS pricing both became more evident at the key 1st June 2016 reinsurance renewal, according to broker JLT Re, as reinsurance rate declines slowed once again, with the key Florida market down just 3.1%.

The continued slowing of reinsurance rate declines, particularly in property catastrophe lines and exposed regions, is a reaffirmation of “a trend of gradual price stabilisation that first emerged during the corresponding renewal in 2015,” according to reinsurance broker JLT Re.

“Risk-adjusted pricing typically fell within a range of flat to down 5% as markets generally held firm against attempts to negotiate higher discounts. Indeed, efforts to achieve reductions in excess of 5% on any one layer were met with considerable resistance.”

Signs of resistance to price declines and pressure are positive evidence of growing discipline, as both traditional and alternative reinsurance markets approach the absolute bottom of their risk appetite and so many accounts no longer meet required costs of capital.

Additionally to the growing levels of discipline being displayed in the market, JLT Re note that pricing levels continue to converge between traditional and ILS or alternative reinsurance markets, a factor which has helped to bring greater stabilisation, it seems.

Betz continued to explain; “Significantly, there was some evidence through the renewal process of pricing levels converging between traditional and insurance-linked securities (ILS) markets, reversing the decoupling trend that first emerged in 2013 when ILS investors deviated away from price expectations set by the traditional market.”

A greater agreement in pricing levels, between traditional reinsurers and ILS markets, suggests that this June renewal may not have been fought on price, but rather on terms, relevance and value-add. This is positive for the market and will further push ILS markets to be able to demonstrate their relevance to clients, which could lead to an increase of tiering within the ILS space with smaller players feel more pressured.

There has certainly been a change of focus among ceding companies at this reinsurance renewal, away from simply achieving the lowest price to ensuring the quality of capital and capacity, as well as the likelihood of continuity being there after losses strike.

As pricing nears a floor in property catastrophe risks in particular, relationships perhaps start to matter more, as well as relevance and scale, meaning that the larger ILS fund managers may stand to benefit and secure increasing opportunities for ongoing growth, positive for their investors too.

On pricing, the growing agreement between traditional and ILS helped to increase market stabilisation.

“This pricing consensus meant most programmes renewed within a narrow range of flat to low single digit reductions in 2016, although changes to terms and conditions added to the overall economic benefit of cedents in some instances,” Betz said.

Artemis spoke with David Flandro, Global Head of Analytics at JLT Re, to gain a little more insight into how the reinsurance market moved at June 1st 2016.

Flandro explained to us; “The trend JLT Re predicted last year before Monte Carlo appears again to have been affirmed. Non loss-affected, risk-adjusted rates-on-line at June 1 were down by 3.1% on average within a range of 0% to -5%. This compares to -8.5% in June 2015 and -17.1% in June 2014. In short, the decreases are getting smaller.

“There are multiple reasons for this, some of them ‘macro’, others ‘micro’. On the macro side, we have the prospect of higher interest rates, the potential for loss cost inflation and an emerging trend of reserve deficiencies on certain balance sheets. On the micro side, there is the fact that we are now just 15% above where property-catastrophe reinsurance rates were at June 1st 2000, the previous low as well as the fact that for some smaller and medium-sized carriers, catastrophe business is no longer earning its cost of capital.”

A “clear trend of price stabilisation was the overriding characteristic of this year’s renewal” JLT Re explains, with a number of factors playing into this growing rate stability.

First and perhaps most importantly, the convergence of pricing levels between traditional and ILS markets is seen by JLT Re as a key development helping to increase reinsurance rate stability at this latest renewal.

A lack of room to drop rates much further is seen as also key, with Florida business around 38% down on 2012 levels and only 17% above the previous cyclical low of 1999/2000, JLT Re explains, which the broker says implies “limited scope for further profitable pricing reductions.” 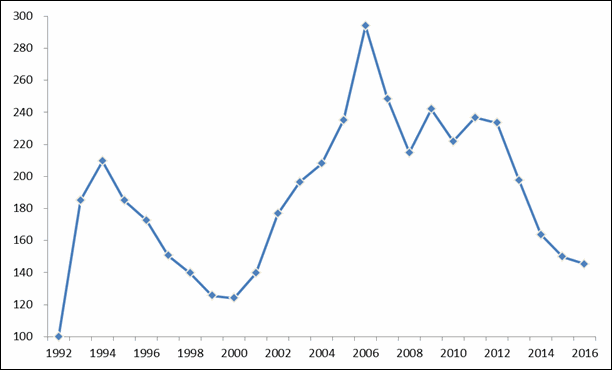 Also important to the rate stabilisation is evidence of increasing underwriting discipline amid margin compression, according to JLT Re, with factors such as deterioration of results, higher catastrophe activity through 2016 so far and the chances of a higher level of hurricane activity this summer, all helping to moderate risk appetite and bringing a more discipline approach to reinsurance underwriting.

Finally, demand has been relatively stable at this reinsurance renewal according to JLT Re, with reduced placements by some of the state backed insurers offset by higher use of risk transfer by private insurers.

However the market does appear to have neared the floor and the expectation is that any future renewals will only see small declines, as long as the market remains free of major losses and surprises.

“Nevertheless, with current pricing levels testing technical minimums, slowing capital inflows, pockets of increased reinsurance demand and a series of catastrophe losses so far this year, several programmes renewed slightly down or as expiring at the 1 June renewal. The trend towards price stabilisation is expected to persist for the remainder of the year, depending on loss activity,” Flandro continued.

Overall, dedicated reinsurance sector capital remains at record levels, with JLT Re estimating that by the end of the first-quarter of 2016 reinsurance capital, including ILS and alternative, rose to $321 billion from $315 billion at year-end 2015. 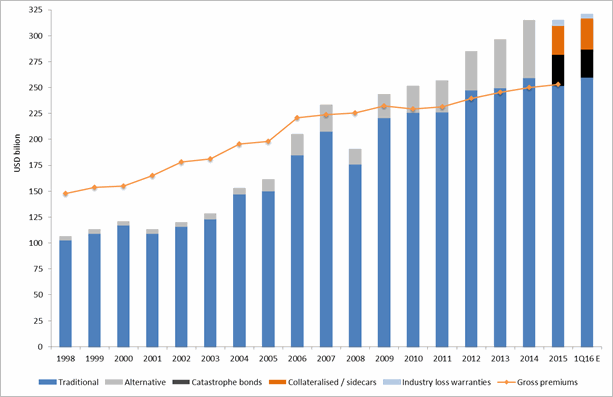 This means that supply of reinsurance capital does continue to exceed demand, with the market remaining awash with capital, which should mean that we continue to see some steady levels of rate decline at future renewals, albeit in the low single digits.

And while reinsurance remains a sector awash with excess capacity, the opportunity is there for ceding companies to take advantage of this and shore up their capital levels using risk transfer.

“After one of the most costly starts to the year since 2011 with significant catastrophe losses in the United States, Japan and Canada, and with predictions of an active North Atlantic hurricane season, cedents should consider taking advantage of the competitively-priced capacity currently on offer,” Flandro said.

And for the markets, both traditional and alternative, it is important to provide value to clients. With pricing nearing the bottom the focus on value will likely increase, as it becomes more difficult to differentiate on price alone and ceding companies become increasingly choosy about who they transact with.

Flandro explained to us; “In today’s reinsurance market, the key is really to be creative, both in understanding risk but especially in coming up with new and innovative ways meet a need. We have to remember we are enablers of business and must therefore bring new ideas to the table. In today’s market, cookie cutter solutions usually don’t find much traction.”

We’ll have more reinsurance renewal coverage in the coming days and weeks, as the market moves through this key period. Keep up with it all here.