Price inflation is both present and substantial in reinsurance program placements, as the traditional process of a brokered execution can result in misaligned market incentives, according to programmatic insurance and reinsurance risk transfer marketplace insurtech Tremor Technologies Inc.

Using aggregate data sources from its auctions Tremor continues to try to educate the market as to how programmatic placement can help in making the reinsurance program execution more efficient.

The company believes that using technology such as its platform to optimise the last-mile of the placement process and distribute risk to capital more effectively based on true appetites and cost are the best way to ensure that truly efficient reinsurance placement is achieved.

Tremor’s platform is designed to bring efficiency to the placement and syndication of large insurance, reinsurance, retrocession and other risk transfer arrangements. Operating on an auction basis, risk is allocated to the most appropriate capital based on parameters related to supply and demand, ensuring optimal placement of the program at true market clearing prices, something the company believes the traditional process is failing at in many cases.

Tremor said that the aggregate supply data from its marketplace shows that reinsurers tend to inflate their initial pricing indications by at least 7.6% on average.

In fact, for realistic percentage placement rates across programs, Tremor found that, on average, reinsurers seem to be inflating prices by at least 5%-10%, perhaps more, which the company says is indicative of price inflation, showing that it both “present and substantial across the board,” even on reinsurance programs that are not short placed.

The chart below shows how Tremor’s data on initial firm order term authorisations, versus final true market clearing prices, can be viewed as either withheld quantity or a price hike and allowed them to estimate the level of price inflation depending on the percentage of program placed. 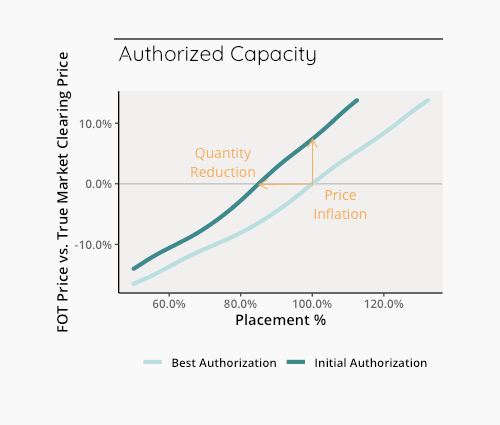 Reinsurance program placements often start off short placed, especially in the current firming market, Tremor explains. But then they ultimately fill and while this may sound like a great result, it’s really a sign that reinsurance providers were perhaps not giving their best offers from the start.

It’s a case of reinsurers withholding capacity they could have deployed. So if a program starts off only 85% placed, but authorisations then increase to fill the 100%, as much as 15% of capacity had been held back that could have been delivered from the off at final clearing terms.

The technology based placement of a marketplace means reinsurers have to supply offers and auths that are true to their own risk appetite and cost-of-capital, meaning placements could be filled more readily and this “inflation” less evident, resulting in a chance of more efficient execution.

Tremor believes its technology can help ceding companies achieve this, putting their risk out for bids in a transparent and optimised process where it is matched with the capital in the most optimal way.

Sean Bourgeois, Founder & CEO of Tremor Technologies, explained, “A traditional placement is simply a brokered negotiation, so you should fully expect reinsurers to have built additional margin into prices considered in their initial authorizations.

“In contrast, placements on Tremor leverage the latest smart market technology that prevents and penalizes this behavior.

“Reinsurers are always allocated at the market clearing price, and those that do inflate pricing in their bids will ultimately lose out with smaller allocations.”

These kinds of insights into reinsurer quoting behaviour have not been available readily before and it’s only through gaining an understanding of where inefficiencies exist in the risk transfer process, that they can be ironed out, smoothed and removed, resulting in better execution all around and lowering everyone’s cost-of-capital in the process.