Recordings of the minimum central pressure of hurricane Patricia, taken just a little way inland from the landfall location in Mexico by a storm chaser, look likely to sustain the uncertainty over the level of loss faced by catastrophe bond investors.

When Patricia struck Mexico the National Hurricane Center reported an estimated minimum central pressure of 920mb. At that level, with the parametric trigger box for the $100m tranche of MultiCat Mexico Ltd. (Series 2012-1) Class C catastrophe bond notes beginning offshore, where pressure was likely lower, it would appear that a 100% loss of principal would be on the cards for investors.

However, the NHC’s data is subject to amendment and revision, with best track data from the NHC’s official tropical cyclone report the one likely to be used in the final calculation and decision of the size of any MultiCat Mexico loss.

As happened with hurricane Odile, the pressure estimates may be raised when the best track data is released and readings from anyone in the landfall region could be one factor that contributes to that.

Josh Morgerman of iCyclone, an experienced hurricane chaser and reporter, was on the ground at the landfall of Odile and again for Patricia. In both cases he recorded the minimum central pressure of the hurricanes using multiple devices.

Morgerman has just published his report on hurricane Patricia and the readings he took inland would appear to suggest that if the official readings will be revised at all, it is likely to be upwards. Morgerman’s report can be downloaded here.

Morgerman’s lowest central pressure recording was 937.8mb, at the point inland where he was recording near to Emiliano Zapata. 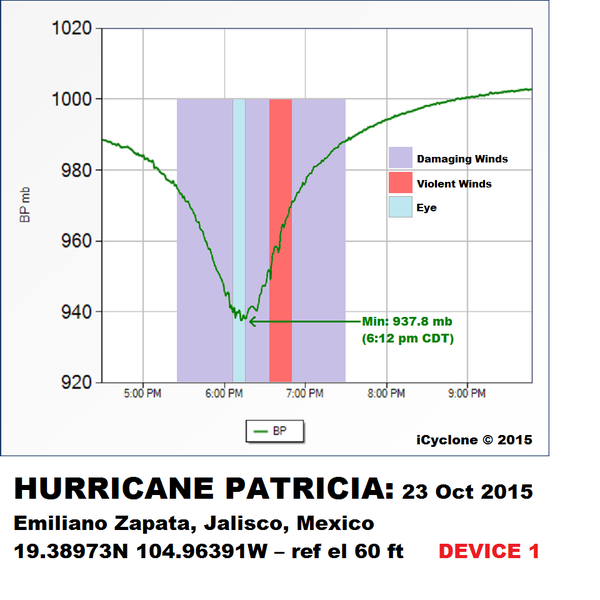 You can see just how near to the coast that reading was taken from this image of hurricane Patricia’s eye making landfall. Morgerman’s location is the X in the image below.

Now compare this to the map Artemis published on the day after hurricane Patricia’s landfall, showing an extrapolated best track of pressure readings based on the estimated data from the NHC and the 920mb landfall.

Looking at that map, the 924mb mark is further inland than Morgerman’s position, so if his pressure reading of 937.8mb is accurate and taken into account by the NHC it could change the landfall pressure and therefore raise the pressure data reported for the position as Patricia entered the cat bonds parametric box.

The question then is how much would it rise and how rapidly would the pressure have risen as it made landfall. Could Patricia’s central pressure have been sub-920mb as it entered the parametric box but have risen to 937.8mb by the time it passed Morgerman’s position?

Morgerman reports that the pressure gradient within Patricia was particularly steep, which could mean rapid changes in pressure as the hurricane neared landfall. He also reported that “it seems likely the hurricane’s central pressure at landfall was 3-7 mb lower than my observed pressure—or between 931 and 935 mb.”

So, a landfall at 933mb, at the mid-end of Morgerman’s estimated range, is 13mb higher than the initial NHC estimates. Is that enough to prevent the full 100% MultiCat Class C note payout? Perhaps.

To make things simpler, based on Morgerman’s estimate for landfall and assuming that hurricane Patricia’s central pressure was lower as it entered the parametric box, it seems likely that a 50% loss of principal at least will occur, as based on the 933mb mid-point of Morgerman’s estimate the pressure would only have to be 1mb lower at the entry to the trigger zone, which seems reasonably safe to assume was the case.

But the full 100% payout now looks more uncertain. To get the pressure down to 920mb or below on entry to the parametric zone the pressure would have to have risen 13mb as it moved to Morgerman’s location. That’s certainly possible, pressure can change very quickly in an intense hurricane as it begins to interact with land and Morgerman said the gradient was steep, but it’s also very difficult to now call.

It’s going to take the publication of the best track data and calculation agent AIR Worldwide’s official report and extrapolation of the best track to determine the minimum central pressure at the exact time Patricia entered the MultiCat Class C parametric trigger box for anyone to be able to say whether this is a 50% or 100% loss of principal.

Once again the value of real-time data in parametric triggers for insurance, reinsurance and cat bonds becomes evident. While parametric triggers based on factors such as estimated or modelled data do work, they can result in uncertainty unless they are clearly exceeded or breached.

For investors it seems an uncertain few weeks lie ahead, until the NHC publishes the final report on hurricane Patricia and the calculation agent can do its job.

Having people like Josh Morgerman on the ground to experience and monitor severe hurricanes in this way is invaluable to science and our understanding of risk. In this case there may be some catastrophe bond investors who also appreciate his impressive work as it brings greater insight and clarity to this cat bonds trigger.