Results from a series of stress tests set by a division of the Bank of England, the Prudential Regulation Authority (PRA), has underlined the importance of diversified reinsurance capital to the 26 largest UK general insurers.

During 2015 the PRA called on some of the UK’s largest general insurers to participate in stress tests that would test their capital adequacy, reserves, and reinsurance arrangements under worst-case scenario situations.

Generally, the results from the stress tests are positive for the insurers, with the report stating, “At an aggregate level, general insurers in our sample were resilient to the PRA market-wide stress tests.”

The PRA explains that the largest insurers were able to withstand the type of major catastrophe event scenarios used for the stress tests, largely due to their broad diversification.

“The results also highlight significant reliance on reinsurance and that these counterparties are well-diversified at an industry level,” said the PRA.

The table below shows the net loss arising from each scenario under the stress tests.

As shown in the table, the reliance on reinsurance in the case of extreme scenarios is clear, with nearly three-quarters of losses from a series of terror events being passed on to reinsurers.

With the portion of losses being borne by reinsurers as high as they are, it’s likely that insurance-linked securities (ILS) funds would also feel some of the impacts, as they increasingly find themselves on reinsurance programmes, along with collateralized reinsurance agreements, sidecars and even catastrophe bonds in some scenarios.

What the report does highlight is just how valuable and important reinsurance capital, and we’d add ILS capacity is to the longevity and profitability of insurers when faced with a worse case scenario situation.

The largest insurers are typically well diversified in terms of products, geographies and markets, and coupled with their use of catastrophe bonds, collateralized reinsurance, or traditional reinsurance to hedge and diversify further, they were mostly able to withstand the stress tests scenarios. 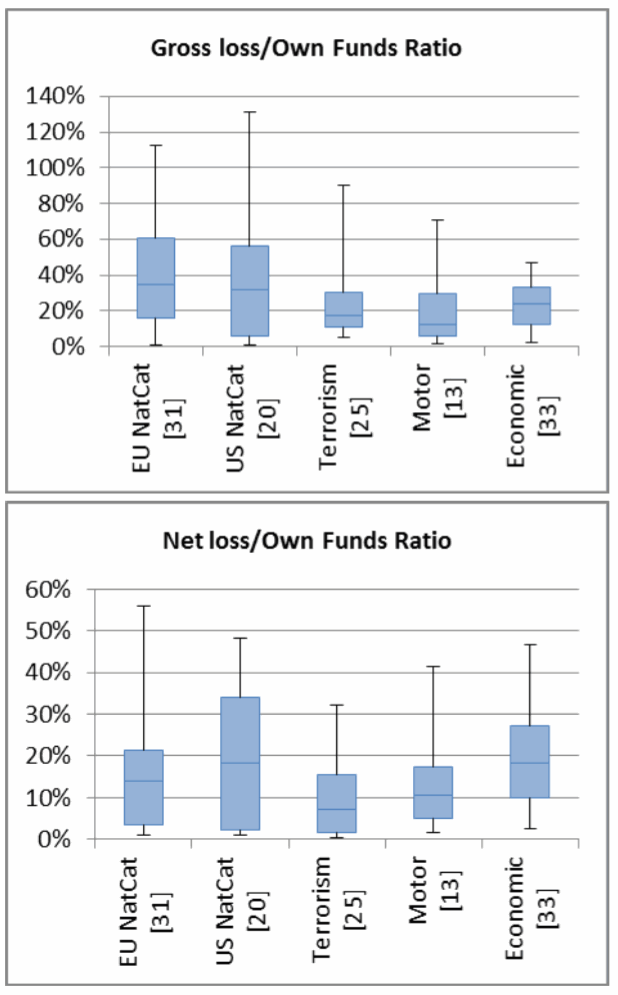 Gross loss and net loss, both as a percentage of own funds (The number in square brackets refers to the number of firms in the distribution)

The above tables show the divergent impact the stress tests had on firms before and after reinsurance, further underlining the significant role it plays the important diversification UK general insurers achieve.

The PRA notes that reinsurance reduces “both the variability and absolute level of gross loss, as well as ensuring that none of the participants had a loss greater than their basic own funds after reinsurance.”

Importantly, the PRA highlights the diversification of reinsurance by domicile. The below chart reveals that generally the UK insurers are well diversified across the jurisdictions. 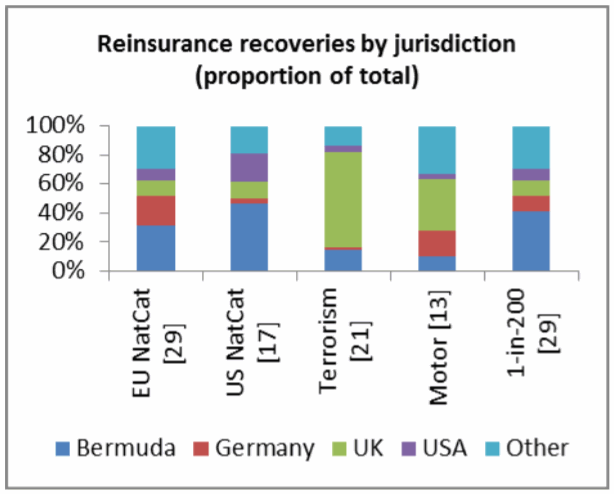 With locations like Bermuda, which is a hub for the global ILS market, providing much of the capacity to cover the major event scenarios tested, it could suggest that ILS funds would also be providing a valuable source of diversified capital to both the insurers and reinsurers.

It will be interesting to see if in future stress tests smaller and less diversified players are considered, and also whether ILS capacity is noted as influential force, and reinsurance continues to play an increasing role in the capital adequacy of UK insurers.