As the world digests the ramifications of the UK’s Brexit vote to leave the European Union, the equity analysts are assessing the potential impact to the insurance and reinsurance sector, particularly in the UK and Europe.

One theme emerges and it’s a reflection of a key investor attraction to the insurance-linked investments and ILS fund asset class, the low levels of correlation that insurance and reinsurance underwriting returns have with global financial markets.

In the wake of the Brexit vote, with many still in shock and financial markets continuing to digest the result, the London insurance and reinsurance market has been responding with messages of stability and hope.

Meanwhile other re/insurance markets have taken the opportunity to impress on the world their own stability, as well as the potential benefits for any London market insurance or reinsurance firms who want to avoid the uncertainty and shift their domicile to somewhere that would not be affected by the UK pulling out of the EU.

Bermuda is of course well positioned in this regards, with a Solvency II equivalent regulatory regime, a low-friction business environment and a speedy process to domicile in the market. Bermuda’s position, as a key reinsurance hub for both the U.S. and Europe, with Solvency II equivalence could see the island benefit from any major fallout for the London market as a result of Brexit being actioned.

Of course there is considerable uncertainty over whether the UK will see a full Brexit withdrawal, a partial Brexit and accompanying renegotiation, or indeed whether the much discussed Article 50 will be invoked at all in the coming months.

With the political landscape setting itself up for a serious vacuum right now, it seems difficult to see anything really changing very quickly, but that uncertainty and the potential for this to hang over the UK like a cloud for months or years, could be just as damaging for re/insurance as a swift Brexit.

As if to demonstrate that point, Australian and global insurance group QBE warned that Brexit could mean the company has to revise its approach in relation to around GB£500m of insurance and reinsurance premiums sourced from European Union member countries and underwritten by UK regulated entities under EU passporting rules.

“Should EU passporting rules not be preserved, QBE will be required to renew this business into newly established licensed EU entities,” QBE explained.

It’s safe to assume that every single foreign company operating in the London and UK insurance or reinsurance market is considering the exact same scenario today, putting plans into place and readying itself to move if necessary.

With as much as two years set to pass before the UK could fully implement a Brexit from the EU, there is plenty of time for re/insurers like QBE to plan, adjust their corporate structure, set up new entitites in other domiciles or regulatory hubs, and be ready to act.

But, with two years of uncertainty possibly ahead for re/insurers, it’s safe to assume that some may choose to move sooner rather than later and it is likely that we will see some companies take decisions to either set up new offices, or even to move out of London before the Brexit has actually occurred. Some companies may choose to do this just to avoid the uncertain times that the UK now faces.

And with options readily available and other insurance and reinsurance hubs ready to accept new entrants with open arms, it seems likely that whatever the outcome of Brexit, there will be some impact to London as a re/insurance hub and others may benefit as a result.

This all adds up to uncertain times for the UK and the London insurance and reinsurance market. With no immediate hit to reinsurance, or indeed insurance-linked securities (ILS) as we wrote on Friday, this uncertainty combined with any negative financial market movements is likely the worst immediate effect of the Brexit vote.

A number of financial market equity analysts have highlighted one positive for insurance and reinsurance firms, as they face volatile markets, the threat of Brexit and this considerable uncertainty, the “uncorrelated” nature of their underwriting income.

Correlation, or lack of it, is of course a key selling point of the insurance-linked securities (ILS) and reinsurance linked investment market, with ILS fund returns generally thought to display extremely low correlation to broader financial market or economic benchmarks.

This low-correlation (we never say never, as when the most impactful global events occur correlation can be rife) is one of the key attractions for investing in ILS or instruments such as catastrophe bonds, and now in the wake of the Brexit votes this is also being highlighted for traditional insurers and reinsurers.

Despite the fact that London market insurance and reinsurance firms are exposed to the financial markets, the political environment, investment returns and even negative sentiment, in the wake of Brexit, the lack of correlation displayed by underwriting returns, especially in non-life risks, is expected to remain very attractive to investors.

In a world full of uncertainty the fact that re/insurers can generate some income that is not as correlated is thought to be a positive, by a number of leading analyst firms, expecting this to maintain the attractiveness of the sector with investors despite the threat of Brexit.

What then of the attractiveness of the ILS asset class?

On Friday, when stock exchanges tanked and currencies plummeted after the Brexit vote result was revealed, the re/insurance industry also saw its share prices fall in dramatic fashion, as evidenced by the Stoxx Europe 600 Insurance index (seen below). 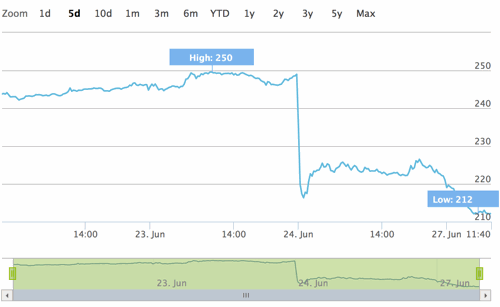 But for ILS investments there will have been no hit, as ILS funds earn their returns through direct reinsurance premium income, so are only exposed to the occurrence of the very catastrophe events they provide protection against.

Of course some ILS investment funds have been expanding into other classes of insurance or reinsurance business, where correlation could be a little higher. But these are minimal, in the main, and the ILS asset class continues to be an investment where low-correlation to the broader financial markets remains a key selling point.

So in the wake of Brexit, when the rest of the insurance and reinsurance industry are working out their strategies for the future and investors are looking warily at any industry that is threatened by Brexit, even taking into account the low-correlation, the ILS asset class should once again gain look like a very attractive alternative.

This uncertainty associated with Brexit is not just a positive for investor sentiment on ILS, it could also make ILS capacity an even more attractive option for European re/insurers looking for reinsurance and retrocession capacity.

Even though there are some structural considerations for ILS funds as a result of the Brexit vote, these are most likely easy to overcome and plan for, meaning that continuity of capacity can be assured with the ILS fund market over the next few years, no matter what happens related to the UK’s membership of the EU.

Added to the security of a fully-collateralised reinsurance protection, the stability and lack of correlation to Brexit itself should serve to make ILS backed capacity an attractive option for insurers and reinsurers who might now be wondering about the stability and future of the London and perhaps also European re/insurance market.

Whenever the world is beset by financial market uncertainty the ILS asset class can become an increasingly attractive target for investors looking for a relatively uncorrelated alternative. That could help to raise the asset class’ profile once again over the coming months.

At the same time, when the insurance and reinsurance market is beset by uncertainty, ILS backed capacity can become increasingly attractive for ceding companies as they look for security, appreciate the full collateralisation and hunt for continuity at a time of strain.

Brexit has caused both of the above to manifest themselves, meaning ILS has an opportunity to demonstrate its benefits, both as asset and protection, once again.

– No immediate Brexit hit to ILS market, but structural issues to consider.