Pool Re secures largest retro program yet in $3bn+ renewal 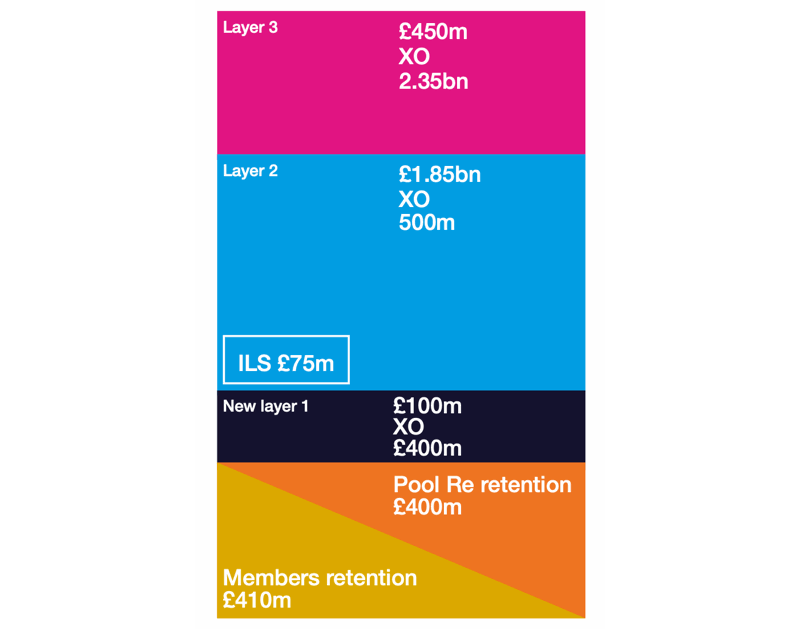 The program was led by reinsurance giant Munich Re, while Hannover Re also provided a significant part of the coverage.

The aggregate excess of loss treaty can attach only when Pool Re’s losses, individually or in aggregate, exceed £400 million in any single year, after member insurers’ combined retention of £250 million per event or £410 million in aggregate.

The £2.4 billion retro reinsurance program is a £100 million increase from the £2.3 billion retro program that Pool Re secured in 2018 and also includes the £75 million of protection afforded by Pool Re’s Baltic PCC terrorism catastrophe bond, which was launched in 2019.

Pool Re’s retrocession program provides it with coverage against losses from property damage arising from nuclear, biological, chemical, and radiological attacks, as well as losses due to cyber-triggered terrorist events, plus more conventional terrorist acts.

Steve Coates, Pool Re’s chief underwriting officer, commented on the successful 2020 placement, “For the second year in a row, this risk was modelled using Pool Re’s own model, developed in collaboration with Cranfield University and Guy Carpenter. It deploys Computational Fluid Dynamics to assess blast risk which considers how blasts move over, around and between buildings. With this continuing improvement in our modelling, we have been able to see changes in the exceedance curve, which led to the creation of a new £100m layer in order to reduce the attachment point to £400 million.”

James Nash, CEO of Guy Carpenter’s international division, added, “Pool Re has once again been successful in sourcing new capacity from reinsurers in a challenging market whilst maintaining their core relationships. This demonstrates the wide support Pool Re that is able to achieve with their proactive and foresighted approach to the peril, coverage and technical expertise. This is an excellent result that Guy Carpenter is delighted to have brokered for them.”

Julian Enoizi, Pool Re chief executive, also said, “We are pleased to have finalised this extended retrocession placement, one of the largest reinsurance deals in the world. As Pool Re continues to return UK terrorism risk to commercial markets, this programme is a core part of our strategy of further distancing the taxpayer from potential loss.”