PCS recorded 40 catastrophe events across the U.S. during 2015, making it the most active year for PCS-designated cat events since 1996, underlining the growing exposure of insurance-linked securities (ILS) funds to frequency events.

Insured losses from catastrophe events in the U.S. throughout 2015 amounted to $14.3 billion, 8% lower than full-year 2014, but slightly above the $12.9 billion reported in 2013, explains Property Claim Services (PCS).

However, while insurance and reinsurance industry losses from catastrophe events have been benign in recent years, the frequency of events can be seen to be on the rise, with 2015 being one of the most active years on record.

$14.3 billion of insured losses came from a staggering 40 PCS-designated catastrophe events in 2015, an increase of 25% from 2014 and the busiest year for catastrophe event activity in the U.S. since 1996, which witnessed 41 events, says PCS. 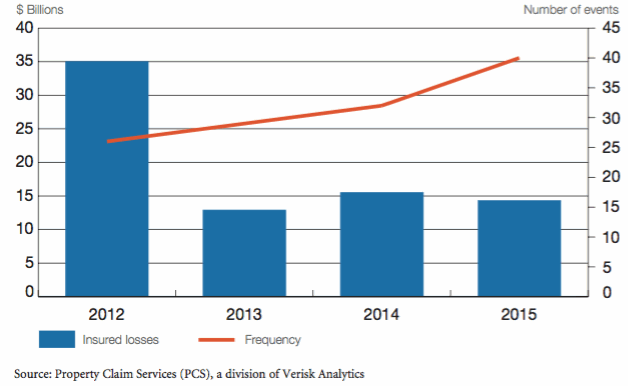 “While relatively low levels of insured loss generally don’t grab the global insurance industry’s attention the way larger losses do, they can have a significant impact for other reasons. Smaller catastrophe events can erode insurer balance sheets because reinsurance protection may not attach,” explains PCS.

It’s a valid point, but also worth noting that while some reinsurance protection might not attach for smaller loss events, there will likely be some reinsurance agreements that do attach on the lower levels, and an accumulation of such smaller, more frequent events can still have a negative impact on insurers and reinsurers balance sheets.

Furthermore, with ILS investment managers increasing their participation in the global reinsurance landscape, particularly as they broaden their peril and region exposures underlined by the impressive growth of the collateralized reinsurance market and spikes in other private ILS contracts in recent times, ILS funds are increasingly exposed to frequency events.

Artemis discussed last month how a number of ILS funds reported potential exposures to severe weather in the U.S., flooding in parts of the UK, and bushfires in Australia, as the range of perils and regions they are exposed to rises with the sector’s appetite to broaden its reach.

The expansion of the ILS space into new perils and regions, along with the significant increase in private ILS and collateralized reinsurance agreements underlines the growing sophistication and understanding of the asset class from both sponsors and investors.

While the expansion clearly has diversification benefits for ILS market players, the rise in the frequency of cat events across the globe, and in particular the U.S., coupled with the sector’s deeper involvement with private ILS transactions across a range of perils and geographies, means ILS funds are more exposed to an aggregation of attritional losses.

PCS stressed in the third-quarter of 2015 how the trend of less severe but more frequent catastrophe events was persisting in the U.S., and following ten PCS-designated events taking place during Q4, full-year 2015 “was the most active by frequency since PCS lifted the catastrophe event designation threshold to $25 million in 1998 (in 1996, threshold was only $5 million),” notes PCS.

PCS’ report explains that Q4 2015 witnessed ten events, up from the six reported in Q4 2014, while the insured loss estimate for this period also nearly doubled, “jumping from $700 million to nearly $1.3 billion year on year,” says PCS.

Regarding frequency, PCS notes that over the last decade the average annual number of PCS-designated U.S. cat events is 31.2, revealing just how significant 2015’s 41-event tally is.

PCS states that the $14.3 billion of insured industry losses falls 22% below the ten-year average of $18 billion, further highlighting the recent industry trend of less severe but more frequent events.

The majority of catastrophe losses in 2015 came from personal losses, at 68%, with commercial losses accounting for 18% and auto losses making up the remaining 14%.

2015 Losses from PCS-Designated Events by Category

In Canada, PCS recorded three designated events during 2015, down from the five reported a year earlier, adding that none occurred during the final quarter of last year. Insured losses also declined for the region, with PCS reporting that the roughly C$150 million of losses from three events makes it the quietest Canadian cat year on record.

While the industry is enduring a persistent benign catastrophe loss environment, it’s important insurers, reinsurers, and ILS players remember that it only takes one substantial event to change company performance outlooks.

For example, another year of 40 U.S. catastrophe events of which one or two are larger, significant industry loss events, could see some in the sector struggle to cope with an aggregation of smaller losses as well as the impacts of a larger event, so it’s important not to be complacent.

“PCS has resurveys open on six catastrophe events,  and preliminary estimates have not yet been published for two events. As a result, full-year 2015 estimates remain subject to change in accordance with the disciplined execution of the PCS methodology,” concludes PCS.