Property Claim Services (PCS) has provided an update to its estimated loss for the insurance industry from the Fort McMurray, Alberta Canada wildfires, lowering it from C$4.67 billion to C$3.98 billion, which is roughly US$2.96 billion. 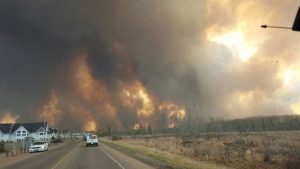 Now, PCS’ third insured loss estimate overall, and second re-survey, has seen the insurance industry loss decline to below its preliminary loss estimate by quite some way, to C$3.98 billion. Furthermore, the firm explains that owing to sufficient granularity of data this is the final survey from PCS on the Fort McMurray, Alberta Canada wildfire.

“With further re-surveys the data becomes more refined, carriers have a better handle on the losses and earlier estimates are more refined,” Ted Gregory, Director of Operations at PCS told Artemis.

Interestingly, Gregory provided a breakdown by line of business, which reveals that personal lines, perhaps unsurprisingly, is expected to have the highest share of the industry loss, at C$2.9 billion (US$2.16 billion).

With commercial business and auto lines taking an estimated C$967 million (US$720 million) and C$114 million (US$85 million) share of the overall insured loss, respectively.

“The main change comes out of personal, of course personal was the largest aspect of the event. As the adjustment process moved on we received updated data from the carriers and personal lines estimates had dropped significantly,” Gregory explained.

PCS’ industry loss estimate data is used widely in the insurance, reinsurance and insurance-linked securities (ILS) sectors for insight and also as triggers for industry loss based risk transfer transactions, such as catastrophe bonds and industry loss warranties (ILW’s).

Artemis also spoke with Tom Johansmeyer, Assistant Vice President (AVP), PCS Strategy and Development, who noted the influence cat events of various sizes can have on insurance, reinsurance, and also ILS players in a softening landscape.

“Fort McMurray may have come in lower than many expected at first, but there’s still an important lesson here for the industry. Smaller events can make a difference. The same is true of the hailstorms we’ve seen in Texas this year.

They may not be large in the industry’s traditional thinking, but they were significant enough to make people take a second look at their books.