PCS reports that catastrophe bond issuance in the first-quarter of 2016 increased by 35% on the same period last year, as nine transactions came to market amounting to just over $2 billion of issuance.

It’s worth noting that data from the Artemis Deal Directory reveals an impressive $2.215 billion of new risk capital issuance in Q1 from ten transactions, the third consecutive first-quarter that experienced record issuance volumes, as highlighted in the Artemis Q1 2016 catastrophe bond and ILS market report.

“Use of PCS data in first-quarter catastrophe bonds grew nearly 20 percent year over year, following a 72 percent increase from the first quarter of 2014 to the first of quarter of 2015,” explains PCS.

In line with the first-quarter of last year PCS reveals that four transactions used PCS data in Q1 2016, however, the total capital volume this represents increased by $150 million year-on-year, to $950 million.

This is somewhat supported by the fact that the average transaction size in terms of volume during the first three months of 2016 is actually higher than any Q1 seen in the last ten years, as recorded by Artemis.

The remaining $350 million of new risk capital issued in the quarter that used PCS data for independent catastrophe designation were Espada Reinsurance Limited (Series 2016-1) and Caelus Re IV Ltd. (Series 2016-1), of which both deals were structured on an indemnity trigger basis. 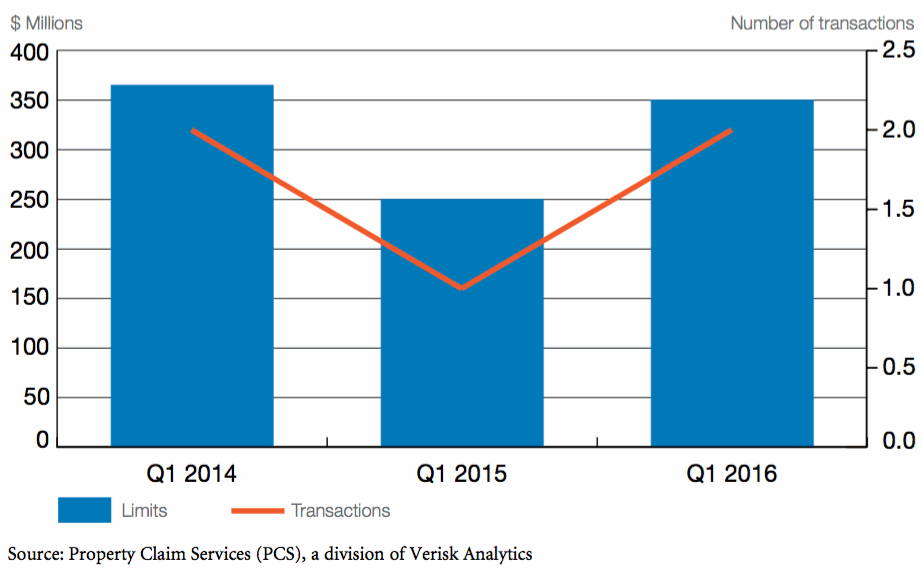 As highlighted in the above chart provided by PCS, the use of PCS data within indemnity structured deals in Q1 2016 increased by 50% in terms of the number of transactions, and by $100 million in terms of new risk capital issued.

The report highlights that in order for PCS to designate an event a catastrophe it must create an insurance industry loss of at least $25 million, and impact a substantial number of insurers and insureds.

As reported earlier in the year by Artemis, PCS recorded 40 catastrophe events across the U.S. and Canada last year, the most active year for PCS-designated events since 1996.

PCS saw its index triggers and independent catastrophe designations broadly utilised in 2015, and it seems the trend has continued in the opening months of this year.

The catastrophe bond and insurance-linked securities (ILS) market continues to expand and mature, underlined by the record-breaking issuance seen in the first-quarter of 2016.

Combined with the expectation among industry players that there’s a real possibility of more frequent and severe catastrophe events across the globe, PCS index triggers and data for catastrophe designations will likely continue to be a valuable element of the space as it continues down its impressive growth path.