A notable moderation in reserve redundancies and a spike in the occurrence of deficiencies across the global Property & Casualty (P&C) sector, suggest it might be wrong to assume reserves will always have a positive contribution on earnings, according to reinsurance broker JLT Re.

In today’s softening and challenging reinsurance marketplace returns on both the underwriting and investment side of the balance sheet are becoming increasingly hard to come by, leading firms to utilise reserves in order to bolster quarterly, and annual returns.

Building up reserves from prior accident years and then using the funds to mitigate adverse market conditions and catastrophe losses, for example, has for long been a feature of the risk transfer landscape, enabling insurance and reinsurance firms to benefit from prudent loss picking and lower-than-expected catastrophe loss years.

However, reserve developments across the P&C industry over the last decade or so has created a situation where redundancies are waning and reserve deficiencies are becoming a more common feature of the marketplace, explains JLT Re in a recently published report, meaning that in the future reserves might not be able to supplement earnings as in the past, for some at least.

“Arguably the largest ‘catastrophes’ ever to befall the risk transfer business have not been the mega property-related events which feature prominently in the headlines, but the slow build-up of reserve weakness driven by aggressive pricing in longer-tail, non-catastrophe lines over extended periods of time.

“Periods of reserve deficiencies have typically had more bearing on the pricing environment due to a prevailing lack of trust in counterparty balance sheets and general boardroom uncertainty,” explains JLT Re.

The reinsurance broker explains that after a period of aggressive underwriting in the late 90s in an effort to increase market share, the majority of P&C carriers were hit by the liability crisis in the early 2000s. In response to this, P&C market participants became increasingly, and even irrationally in some cases, conservative in their reserving for current accounting year underwriting losses.

P&C carriers were essentially reserving far more than was necessary for ultimate losses for the underwriting year in question, which JLT Re says resulted in reserves becoming “gradually redundant” since the 2006 accounting year.

As a result, P&C carriers have benefited from being able to release redundant reserves to bolster their quarterly and annual earnings, helping to mitigate any declines in business operations or to reduce the impacts of any losses experienced. 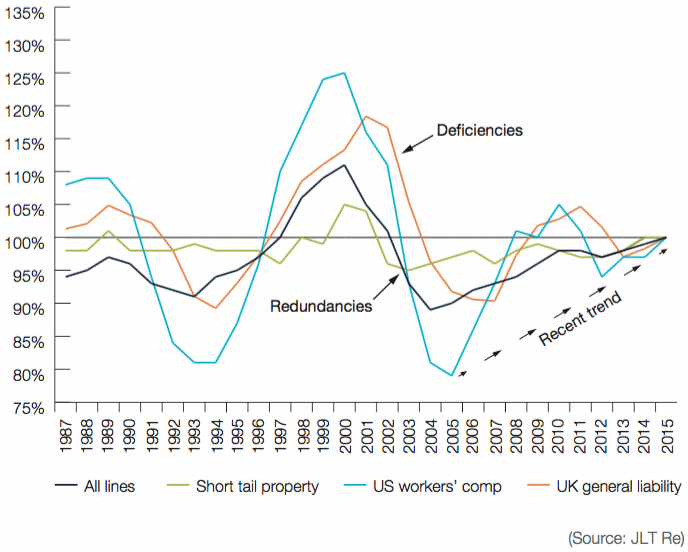 However, the benign loss period witnessed in recent times, highlighted by the fact that Florida hasn’t experienced a land falling hurricane in more than a decade, and other market developments suggests a change in the ability of P&C carriers to utilise redundant prior year reserves to support their earnings.

As the above chart shows, the dynamics of P&C reserving has changed and since around 2008 deficiencies have started to increase in certain business lines, a point the reinsurance broker expands on.

“Whilst the most recent accident years have admittedly not had time to develop sufficiently to make broad conclusions, the trend is nevertheless clear. Where accident years 2003 through 2007 were, in aggregate, redundant in longer-tail business lines, experience since accident year 2008 has been more varied,” explains JLT Re, in reference to the above chart.

Despite an uptick in catastrophe losses in the first-half of this year, in more recent times losses have been benign and often below historical averages. The pace at which some P&C carriers reserves build-up can be slower in a year with lower expected losses, meaning that when losses do increase in future years there’s a greater chance of some firms not having sufficient funds in place.

Furthermore, JLT Re notes that most carriers have likely now released any redundant reserves that were amassed from 2003 through 2007, leading to a real concern that reserves are beginning to completely run-out for some in the space.

“This seems to have been borne out in the fourth quarter of 2015 in particular as several carriers reported net deficiencies in key business lines.

“At a minimum, this means it can now no longer be assumed that reserves will always prove to be a reliable source of earnings. Indeed, the sector may see net accident year deficiencies for some of the more recent, less developed accident years,” said JLT Re.

An inability to strengthen reserves in benign loss years coupled with the thinning of redundant reserves as companies look to boost earnings in a low underwriting and investment yield environment, suggests that some P&C carriers could find themselves in a very sticky situation should losses rise substantially, or when the next large event happens.

It’s been reported that some in the space have been aggressively, and imprudently releasing reserves to bolster earnings and essentially mask true underwriting profitability, something that could come back to bite further down the line.

Losses in the first-half of 2016 have increased when compared to more recent years, but with Aon Benfield reporting H1 insured losses of $30 billion, which is still just below the ten-year average, it’s not as though catastrophe losses have been truly substantial in 2016.

Nevertheless, second-quarter and first-half results from insurers and reinsurers reveals that for some, catastrophe losses during 2016 have significantly impacted profits, perhaps in part due to an inability to release reserves and the resulting rise of reserve deficiencies highlighted by JLT Re.

Industry participants warned at the start of the year that reinsurer reserves were running low, and that this would likely result in a decline in earnings. Combine this with an increase in catastrophe losses and it’s not too surprising to hear JLT Re warn that moving forward, reserves could be less of a benefit to P&C carrier earnings than before.