Our latest report on the catastrophe bond and insurance-linked securities (ILS) market has now been published. The report, ‘Q3 2017 Report – Parametrics dominate an average but diverse quarter’, analyses a diverse third-quarter featuring $874 million of issuance that took the outstanding market to a new record size. 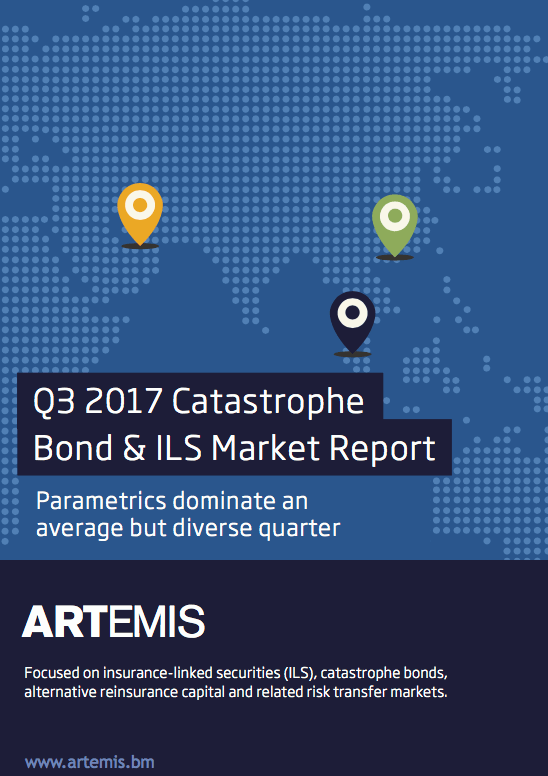 This report reviews the catastrophe bond and insurance-linked securities (ILS) market at the end of the third-quarter of 2017, looking at the record level of new risk capital issued and the composition of transactions completed during Q3 2017.

During the third-quarter of 2017 catastrophe bond and ILS issuance failed to exceed $1 billion for just the second time in the last five years, but the Artemis Deal Directory shows that issuance was still above the ten-year average for the period, by almost $108 million.

In total, six transactions consisting of nine tranches of notes came to market in Q3 2017, amounting to $873.71 million of risk capital issued. Despite this being above the ten-year average for the quarter, this was the first time this year that quarterly issuance failed to break records.

However, the outstanding market still reached a new end-of-quarter high, of $29.87 billion, with year-to-date 2017 issuance, as at the end of Q3, also breaking records, reaching $10.64 billion.

In terms of the number of transactions, half of Q3 2017 cat bond issuance was privately placed as cedents continue to find efficient ways to access reinsurance capital, although these deals only accounted for around 11%, or $93.71 million of total risk capital issued.

The majority, or $680 million of Q3 issuance featured support from the World Bank, including a $320 million deal that is the first to benefit the Pandemic Emergency Financing Facility (PEF). The remaining $360 million, or 41% of Q3 issuance that featured the World Bank, benefits the Mexican government, for the third time in the market’s history. There was also $100 million of issuance from a first time sponsor, AmTrust Financial Services,  as it sought capital market backed reinsurance capacity during the quarter.

There was another first in the quarter, as pandemic risk featured in the third-quarter of 2017 with a $320 million deal supported by the World Bank, which benefits the Pandemic Emergency Financing Facility (PEF), and accounting for nearly 37% of Q3 issuance.

The World Bank also supported a $360 million three-tranche transaction which covered multiple Mexican natural perils, including earthquake, Atlantic Mexican hurricane and Pacific Mexican hurricane risks. Combined, these tranches amount to just over 41% of Q3 issuance. Of course the earthquake tranche is now facing a loss after the first Mexico earthquake in September.

Pricing trends continued to move downwards in the third-quarter, as ILS investors continued to demonstrate their appetites for new risk and ability to offer reinsurance capital at very keen rates, with all transactions we have the full data for pricing well below their initial guidance ranges.

After a record-breaking first-quarter and a truly huge, unprecedented level of catastrophe bond and ILS issuance during the second-quarter of this year, third-quarter issuance was always likely to be somewhat more moderate.

But despite issuance failing to reach the $1 billion mark, a lack of deal maturities in the third-quarter helped the $873.71 million of total risk capital issuance result in outright market growth, once again.

The outstanding catastrophe bond and ILS market volume at the end of the third-quarter totalled $29.87 billion, which is actually $562 million higher than at the end of Q2, according to data from the Artemis Deal Directory.

Catastrophe bond and ILS issuance in the third-quarter of any year is typically the quietest, and this has again been the case in 2017, so far.

But underlining just how much the marketplace has expanded in recent times, our data shows that the outstanding cat bond market size at the end of Q3 2017 is a staggering $4.42 billion higher than it was just one year earlier. Furthermore, in just the last six months, the outstanding market has grown by $2.68 billion.

Will this rapid growth rate continue? Stay tuned to Artemis and we’ll keep you updated as the catastrophe bond market continues to expand.

For full details of the third-quarter, including a breakdown of the issuance by factors such as perils, triggers, expected loss, pricing, and analysis of the issuance trends by month and year, download your copy of Artemis’ Q3 2017 Cat Bond & ILS Market Report here.