The Pacific Alliance trade bloc in Latin America continues to work towards its first catastrophe bond issue, with reports suggesting that progress continues to be made with the assistance of the World Bank and 2018 mooted as a potential year for issuance. 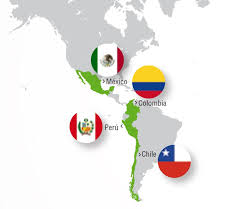 The Pacific Alliance members, Peru, Chile, Colombia, and Mexico, has previously had discussions involving reinsurance firm Swiss Re about the potential for a joint catastrophe bond issue.

A report from Latin Finance magazine says that these discussions, which began in 2015, are ongoing with the technical support of the World Bank, with disaster insurance the agenda and catastrophe bonds the likely vehicle that could be used to secure it.

For the four countries, there could be benefits in joining forces to issue a cat bond.

By pooling the risk from across a wider region the cat bond could be larger and there are economies of scale in the cat bond issuance market. The issuance costs can be shared between the group, while the broader risk pool may actually be more attractive to investors, resulting in keener pricing. There would likely be a global reinsurance player involved to help in the risk transfer by acting as ceding reinsurer.

Depending on how such a cat bond was structured could have a significant bearing on its attraction for investors as well. If the tranches could be structured to cover discreet country specific perils, while ensuring the disaster insurance would pay out to the benefit of the group if a catastrophe struck on a border, it could be a very attractive transaction for both sponsor and the ILS investor community.

According to Latin Finance, the Deputy Director of the Public Debt Office of Mexico Larisa Mora-Aguila told the publication that the four members of the Pacific Alliance had met for talks about a potential catastrophe bond and that an assessment report from the World Bank is being prepared for presentation to the group later this month.

President of Colombia Juan Manuel Santos stressed that by issuing catastrophe bonds the Pacific Alliance members could benefit from a replacement for insurance, as well as disaster relief financing. It’s also reported that Santos said the instrument could be ready as early as January.

Of course Mexico is already a sovereign sponsor of catastrophe bonds, the first government to work with the World Bank to issue such debt as a source of disaster insurance.

With a Cat-Mex cat bond transaction in 2006 and two MultiCat cat bonds already under its belt, as well as its most recently issued IBRD / FONDEN 2017 multi peril cat bond, Mexico is experienced in working with the World Bank to tap the capital markets for disaster risk transfer and financing.

Of course, the recent magnitude 8.1 Chiapas, Mexico earthquake is likely to cause a full payout of the $150 million earthquake layer of the FONDEN 2017 cat bond, which leaves Mexico without the earthquake component.

Perhaps if Pacific Alliance members can agree on terms and the details of a cat bond transaction, an earthquake focused cat bond for the trade bloc would help Mexico replace its eroded layer of quake coverage as well.

The ILS investor community would welcome more sovereign sponsors coming to market through the World Bank’s issuance platforms. Catastrophe bonds can provide vital post-disaster relief funding and if structured with parametric triggers can payout in a matter of weeks.