Hurricane Ophelia, having become the furthest east storm to reach major Category 3 status, is tracking towards Ireland and threatens a landfall in the south-west of the country as a strong extra-tropical storm which hurricane wind gusts, a damaging storm surge and heavy rainfall.

Hurricane Ophelia is still packing 85 mph sustained winds at this time but is expected to weaken a little as it transitions to an extra-tropical storm on track for Ireland. However meteorologists warn of a sting jet which could result in damaging gusts of wind as Ophelia crosses Ireland. 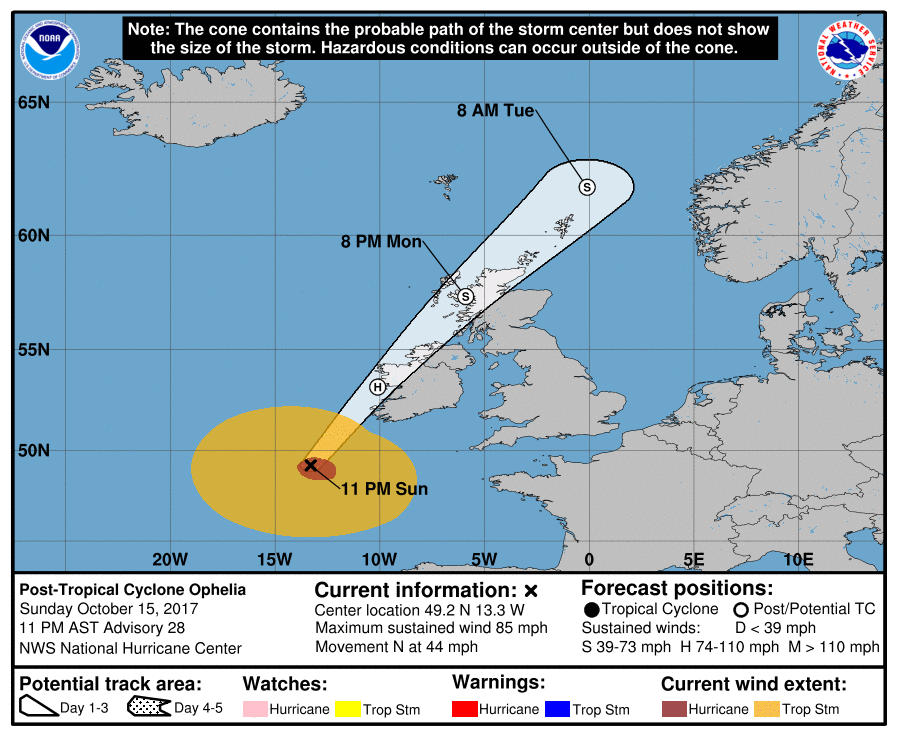 Impact Forecasting, the risk modelling unit of reinsurance broker Aon Benfield, warned of a medium to high potential for a significant local insured loss because of Ophelia’s expected impacts on Ireland.

It’s unusual for a storm to transition so far north, but Ophelia has defied many meteorologists expectations as it kept strengthening as it neared the Azores.

Category 3 status was relatively short-lived, but it meant that Ophelia was almost certain to remain a very strong and dangerous storm as it reaches the south-west corner of Ireland.

Impacts are expected widely in the country, with damaging winds, a storm surge to the east of where the center of Ophelia makes landfall and also heavy rainfall expected across much of the country.

Ophelia could cause a substantial amount of damage if wind gusts are hurricane strength and higher, while the storm surge could also inundate coastal areas.

Hence Ophelia could create a sizeable insurance loss in Ireland, with some ramifications for reinsurance capital possible.

You can see Ophelia as it approaches Ireland in this visualisation:

1. Ophelia is expected to be a powerful extratropical cyclone with hurricane force winds while it moves near Ireland and the United Kingdom. Direct impacts from wind and heavy rain in portions of these areas are likely, along with dangerous marine conditions. For more details on the magnitude, timing, and location of impacts from post-tropical Ophelia, residents in Ireland should refer to products issued by Met Eireann, and residents in the United Kingdom should refer to products issued by the Met Office.

WIND: Gale-force winds are expected to begin across southern Ireland by early Monday morning and gradually spread northward across the country during the day. Hurricane-force winds are expected to reach the southern portions of Ireland by Monday afternoon and spread inland across the country into Monday night. Preparations to protect lives and property should be rushed to completion by this afternoon.

Wind speeds atop and on the windward sides of hills and mountains are often up to 30 percent stronger than the near-surface winds indicated in this advisory, and in some elevated locations could be even greater.

RAINFALL: Ophelia is expected to produce rainfall amounts of 2 to 3 inches (50 mm to 75 mm) with isolated totals near 4 inches (100 mm) through Tuesday across western Ireland and Scotland. Across eastern Ireland, rainfall amounts will average around 1 inch (25 mm) or less.

STORM SURGE: A dangerous storm surge is expected to produce significant coastal flooding near and to the east of where the center of the post-tropical cyclone makes landfall. Near the coast, the surge will be accompanied by large and destructive waves.

Mean wind speeds in excess of 80 km/h and gusts in excess of 130km/h are expected, potentially causing structural damage and disruption, with dangerous marine conditions due to high seas and potential flooding.

Mean wind speeds between 65 and 80 km/h with gusts between 110 and 130km/h are expected. The winds have potential to cause structural damage and disruption, with dangerous marine conditions due to high seas and potential flooding.

Heavy rain at times on Monday with some local flooding, especially in coastal areas. 40+ mm possible.

Heavy rain at times on Monday with some local flooding, especially in coastal areas. 25 to 40 mm possible.