Swiss Re has revealed that the advanced markets of the world recorded solid non-life insurance and reinsurance premium growth in 2015, while overall, the sector’s capitalisation remains strong.

ILS, with its focus on non-life markets was likely a contributor to the expansion of non-life markets in 2015, and has an opportunity to deepen its relationship with the global non-life re/insurance space.

Advanced non-life markets, with the exception of Oceania, which remained flat (0.1%), all recorded insurance and reinsurance premium growth in 2015, ranging from 4.1% in advanced Asia, 3.2% in North America, to 1.5% in Western Europe.

Furthermore, in Swiss Re’s latest SIGMA report, the reinsurer notes that the global non-life sector remains well capitalised, with a solvency ratio of 130% in 2015, a record high for the sector and an improvement of 6% on 2014’s figure.

While the Swiss Re study fails to mention insurance-linked securities (ILS) as a contributing factor of non-life re/insurance premium growth in advanced markets, and the strong capitalisation of the sector, there’s reason to note its potential influence both now, and in the future.

The fact ILS is persistently claiming a larger share of the overall reinsurance pie, especially in 2015 which saw catastrophe bond issuance records broken and the continued rise of collateralised reinsurance placements, suggests that the ILS market contributed to the overall expansion of the global non-life sector, growing its influence and presence.

What’s more, as the acceptance and understanding of ILS capital and structures continues to advance, ILS will have an opportunity to take more and more business from the traditional reinsurers, in both advanced and emerging non-life markets. Enabling ILS funds and managers to access non-life risks more directly, which has the potential to increase efficiency of the risk transfer, and ultimately presents an opportunity for ILS to play a greater role in non-life markets around the globe.

Despite premium growth and the sector’s strong capitalisation, Swiss Re notes that the overall profitability in the sector, measured by return on equity (ROE), fell to 7.2% in 2015, from the 9% reported a year earlier. 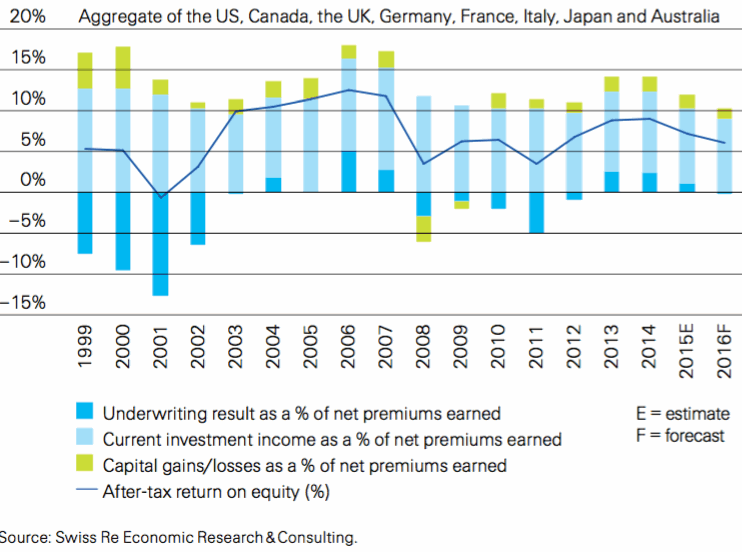 Composition of profits as a % of net premiums earned and ROE, aggregate of eight major markets, 1999–2016

As the chart above highlights, underwriting results and ROEs have shrunk in recent years and are predicted to fall further in 2016. Underwriting and investment results declined in 2015 and with the low interest rate environment expected to continue and reserves to diminish further, it’s likely this trend will continue in the near-medium term.

In fact, the chart shows that the forecasted, overall non-life re/insurance sector ROE for 2016 is actually the lowest ROE since 1999 where the underwriting return has been positive, suggesting perhaps that further pressures and declines could be on the horizon for companies in the coming months.

The chart shows that in 2015 the ROE continued to fall along with reduced investment gains, but the non-life sector still recorded an underwriting profit, albeit it a decline on the previous year, likely owing to the strong level of reserve releases firms have been seen to practice in recent times to offset limited profitability.

Swiss Re notes that the dip in underwriting profitability is likely due to the slowing of reserve releases, meaning that firms are unable to mask true profitability as reserves are beginning to dwindle in line with the continued benign loss period.

So the sector remains well capitalised and profitable, which, as noted, was likely helped by the continues influx of ILS and its desire to assume reinsurance linked business,, but also due to premium growth across the majority of advanced markets.

However, with ROEs persistently declining and further contraction expected along with declines in investment returns as interest continue to hover near historically low levels, and reserve releases slowing, it might not be too long before underwriting results turn negative for the sector.

“Non-life insurers’ profitability is expected to continue to be under pressure as investment returns remain depressed and soft market conditions continue,” said Swiss Re.