The US weather service NOAA has just announced its forecast for the 2022 Atlantic hurricane season, and they are another organisation saying it is likely to see above-normal levels of tropical storm activity, with a 65% chance of an above-normal season in 2022. 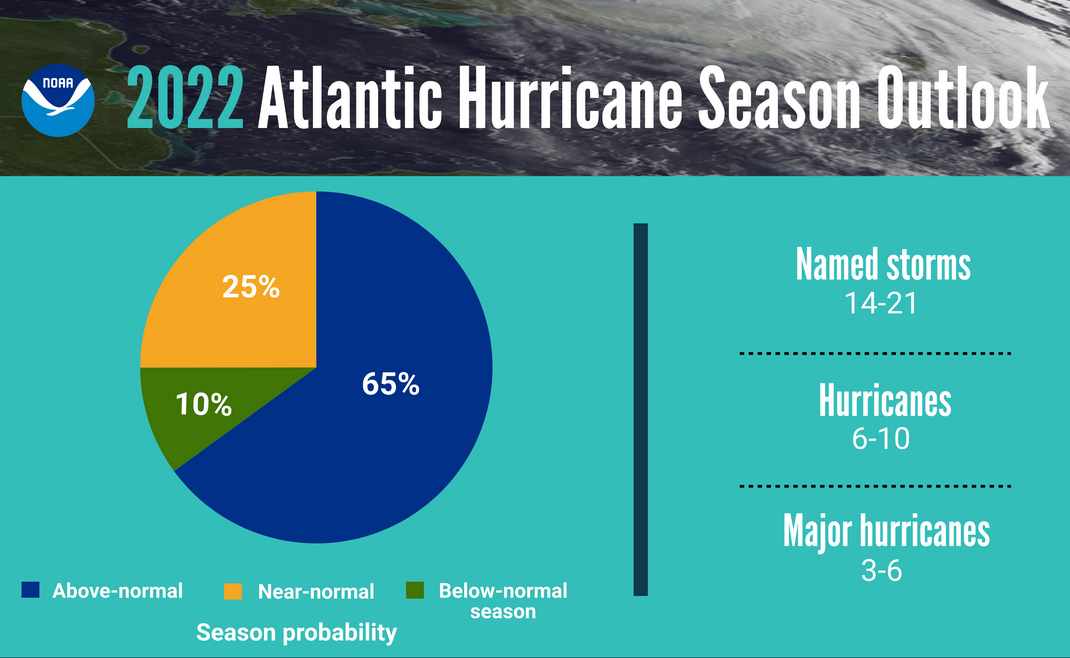 That would make it the 7th consecutive Atlantic hurricane season with activity levels above the norm, NOAA’s administrator Rick Spinrad explained just now.

So, it increasingly looks like insurance, reinsurance, catastrophe bond and insurance-linked securities (ILS) interests should prepare for what could be another busy summer hurricane season.

Of course, it is always important to note that just because we have an above-normal level of storms, even major hurricanes, it does not necessarily translate into major losses for the insurance and reinsurance sector.

Landfall locations are always key here, as storms that impact high-concentrations of urban or coastal values are the ones our insurance, reinsurance and ILS market readership are most concerned about.

NOAA is forecasting a 70% chance of their being between 14 and 21 named tropical storms during the 2022 hurricane season.

Between 6 and 10 of these could become hurricanes, while 3 to 6 could intensify to become major hurricanes with Category 3 or greater wind speeds, NOAA’s administrator Spinrad said.

Adding these latest figures from NOAA to those forecasters we track, which include a number of those tracked by the reinsurance, catastrophe bond and wider ILS industry, our Artemis average  is sitting stubbornly, with no change as the last few forecasts came in, at an active 19 named storms, 8 hurricanes and 4 major hurricanes, with Accumulated Cyclone Energy (ACE) of 153.

As we added in our article earlier today and will reiterate here, with La Niña conditions expected to persist as far as into the peak of the 2022 Atlantic hurricane season, forecasters believe this portends another potentially challenging year for US hurricane zones.

The latest ENSO forecasts continue to suggest a 58% chance of La Niña being dominant through to the August – October time fram, and a 61% chance it lasts into fall and early winter 2022.

On top of this, some meteorologists suggest the loop current in the Gulf of Mexico is primed for a busy hurricane season, as it is already extended quite far north for this time of the year.

That can suggest greater chances of more storm intensification into the Gulf Coast and Florida panhandle, as it is thought the availability of warmer Caribbean waters much further north into the Gulf of Mexico can fuel tropical storms as they move closer towards land.