David Flandro, Executive Vice President at reinsurance broker JLT Re, said he expects to see continued growth of overall reinsurance capacity at the upcoming June 1 renewals, resulting in more price declines, and that further inflows from capital markets investors are to be expected.

“We see no let-up in capacity at the 1 June renewals. At the same time, we are experiencing some increase in demand as companies buy additional cover rather than just pocket the savings. Some of this is driven by new opportunities that have arisen in the private market in Florida, as well as risk transfer likely to be purchased by Citizens and the FHCF,” Flandro explained.

This increased demand will be welcomed both by traditional reinsurance companies that need to put excess capacity to work, as well as by capital market investors and insurance-linked securities (ILS) funds that are looking to deploy additional capital into the space.

Ed Hochberg, CEO, JLT Re in North America, added; “It is interesting that the private market is potentially competitive with the FHCF, depending on where the FHCF layer sits in a client’s program. As such, we expect to see some companies reduce their FHCF coverage to 75% or even 45% in favour of private market mechanisms. We feel that RMS v15 is unlikely to have a significant impact on the amount of cover purchased.”

This confirms a trend that has already been seen in a number of recent catastrophe bond transactions by Florida sponsors, using alternative covers to reduce reliance on FHCF reinsurance. A large primary insurer also recently came to the market seeking a layer of traditional and collateralized reinsurance cover to reduce its FHCF layer significantly, a trend that looks set to continue.

David Flandro concluded; “At present, JLT Re’s Florida risk-adjusted property-catastrophe reinsurance rate-on-line index is expected to fall by up to 10 percent. Actual reductions are of course client and layer-specific.” 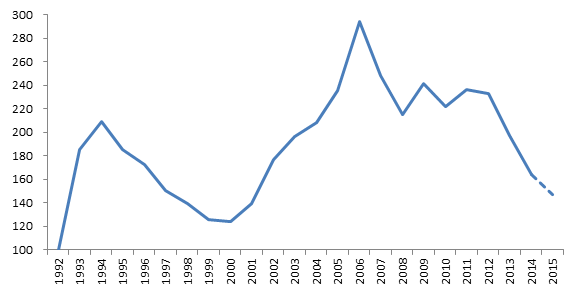 “Reinsurers are expressing some level of resistance to the softening at the pace observed recently but we believe that with a global reinsurance sector gross premiums to surplus ratio now under 80% at year-end 2014, the amount of capacity out there will act to  maintain downward pressure on rates,” Flandro explained. 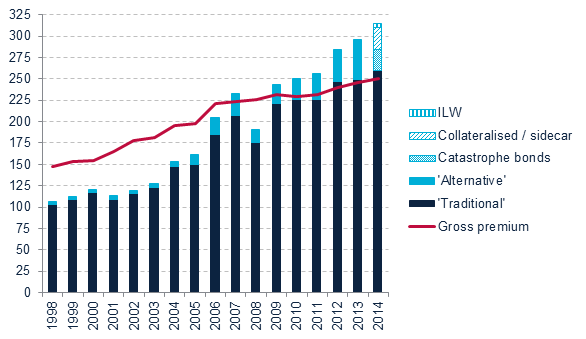 Speaking during a second panel focused on ILS and how the market may react after a major loss event, Flandro said that he expects to see ongoing inflows of capital from the likes of pension funds. This is likely to have an ongoing softening effect on rates, he explained.

“It will take a confluence of major events to turn rates,” he commented, saying that a major catastrophe loss, plus a financial crisis and a sovereign default type event may be required to cause any meaningful spike in reinsurance pricing in the future.

Discussing an RMS scenario event of a $130 billion loss from a Florida and East Coast hurricane track, an event that might wipe out as much as $8.8 billion of outstanding catastrophe bond capacity, Flandro said the effect on reinsurance pricing from this event alone would likely be muted.

He said that the market could expect to see a rise in rates on property catastrophe reinsurance renewals for one or two renewals, but beyond that he would expect to see large institutional investors recapitalising the space and potentially upsizing their allocations to take advantage of any rate rises.

Further rate declines, more overall reinsurance capital growth and a continued interest in supplying more capacity from ILS funds and institutional investors such as pension funds, continues the storm that has created the significant ongoing pressures for traditional reinsurers.

With no let-up in sight, the outlook worsens for some traditional players that are most exposed, which will likely ramp up the pressure to merge, acquire or to innovate in order to survive.

Read other articles from the RMS Exceedance 2015 event: