The United States continued to be affected by severe weather on Tuesday, with the most impactful event seeming to be a tornado that tore through the New Orleans metro area last night.

We reported yesterday that tornadoes hit Texas and Oklahoma on Monday and Monday night, as a well-forecasted severe weather outbreak began to move east across the United States.

Louisiana, Mississippi and Alabama were all on-watch for severe thunderstorms, large hail and possible tornadoes for Tuesday and the forecast proved accurate, with New Orleans in the path of the most damaging event.

At least one person has been reported dead after a tornado touched down near Arabi and passed through the Lower 9th Ward, with the death reported in St. Bernard Parish where damage to property has been said to be extensive.

The image below, from Nola.com, shows the area of New Orleans most affected by the tornado: 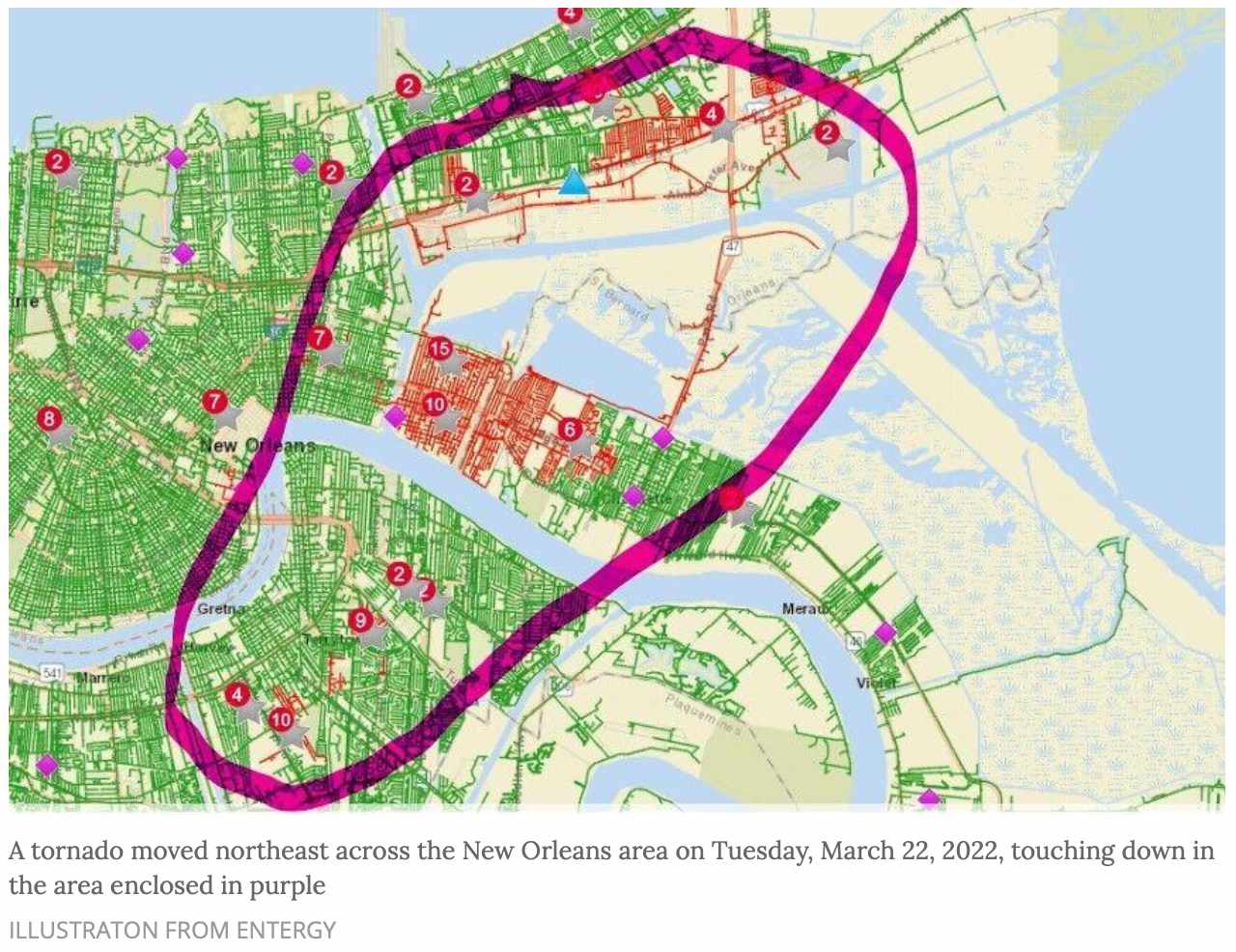 Significant damage has been reported along the tornado track through the Lower 9th of New Orleans, which will undoubtedly add to the insurance and perhaps reinsurance market costs from the ongoing severe weather event. Over 16,000 households were reportedly without power in the metro area.

Reports suggest as many as eight blocks of the metro have experienced major damage to roofs and structures, while another tornado was confirmed north of Lake Pontchartrain as well.

So far, observers are reporting around 36 tornado reports for Monday and another 32 for Tuesday, as part of this outbreak. These are unfiltered, so the figures will fall, but it represents perhaps the most significant severe convective weather event of 2022 so far.

The tornado threat is now shifting towards the south east, with warnings having been raised for parts of southern Alabama and the Florida Panhandle in recent hours.

There continue to be warnings of large hail and strong, near hurricane force winds, as the line of storms moves east, while tornadoes are possible along much of its path.

As we explained yesterday, extensive severe convective weather and storm outbreaks that span multiple states like this can result in relatively significant insurance and reinsurance market losses, once all the damage is counted.

However, the magnitude of insured losses and whether it has any impact for reinsurance capital usually comes down to the locations affected and whether any metro areas are impacted, such as we’ve now seen in New Orleans.

As we reported yesterday, prior to this severe weather outbreak industry losses from natural perils in the US were running below-trend for the time of year.

This tornado outbreak will elevate that, perhaps sufficiently to get back towards the trend, adding to other costly losses for insurance and reinsurance interests around the globe in Q1 2022.

The severe weather is expected to continue through today, Wednesday, in the south east and move towards the eastern seaboard into Thursday.

It’s worth highlighting that there is minimal information available to ascertain the potential impact to insurance, reinsurance or insurance-linked securities (ILS).

But, from the news reports and if today turns out to be impactful as well, it does seem this severe weather event could add up to be significant enough to cause some aggregate deductible erosion, perhaps even some reinsurance impacts to specific covers.