Data from the Artemis Deal Directory shows that catastrophe bond issuance over the 12-month period ending August 31st, 2017 reached a new market high of $13.5 billion, and with insurance-linked securities (ILS) predicted to expand its remit, further growth is likely.

Catastrophe bond issuance in the first-half of 2017 broke records, driven by an unprecedented volume of issuance in the second-quarter of the year, as cedents looked to the capital markets for increasing volumes of reinsurance and risk transfer.

And according to Artemis’ figures, and as shown by the Artemis Deal Directory, the $13.49 billion (more precisely) figure for the period under review is the highest 12 months of issuance ever recorded since the market’s inception roughly 20 years ago. 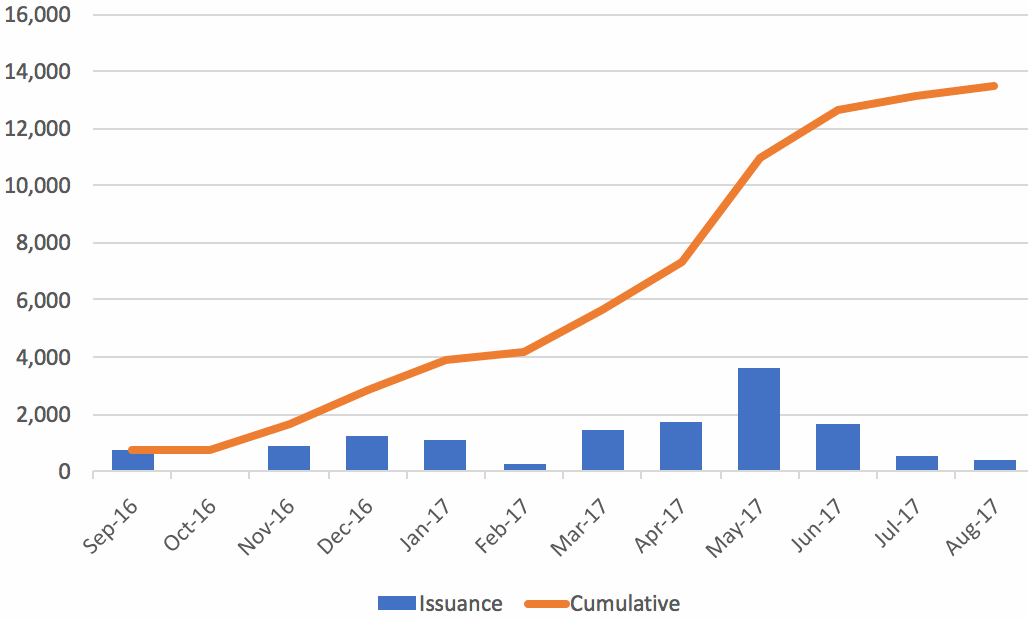 Speaking with Bloomberg TV about the potential impact of hurricane Harvey on the global catastrophe bond market, Paul Schultz, Chief Executive Officer (CEO) of Aon Securities, confirmed that in a forthcoming Aon Benfield ILS market report cat bond issuance for the 12-month period ending June 30th, 2017, reached $11.3 billion, continuing to explain that as the market expands its remit, flood is a peril the ILS space could expand into.

It’s important to note that Artemis’ numbers for cat bond issuance over the period in review is higher than that noted by Schultz owing to the inclusion of certain private transactions. Aon typically only includes traditional 144A catastrophe bond issuance in its ILS reports.

But regardless of the difference in numbers, the fact remains that the catastrophe bond market over the last year or so has expand rapidly in terms of issuance and, with Schultz noting an expectation that the market will continue to expand its peril base, growth is likely to continue.

Schultz explained to Bloomberg that it was unlikely that Harvey would result in a loss to any catastrophe bonds. However, he did warn that growth in aggregate structures over per-occurrence structured deals could see some of that aggregation eroded, ultimately leaving investors more vulnerable to losses for the remainder of the year.

Schultz also said that with flood being a likely place the ILS market will expand into in the near-term, then events like Harvey have the potential to drive losses for cat bond investors in the future.

ILS market players and experts have commented on the potential for ILS to enter the flood market in the U.S., both before and after the impact of hurricane Harvey and the subsequent expected loss to the National Flood Insurance Program (NFIP).

Investors in the ILS space are mature and sophisticated, and if the risk is well understood and the pricing metrics acceptable, it’s likely that ILS could play an important role in the flood space, assisting the efforts of more traditional insurance and reinsurance providers in the fight to narrow the growing flood protection gap.

With just shy of four months of the year remaining, it will be interesting to see how strong catastrophe bond issuance is during the third and fourth quarters, and whether the catastrophic flooding brought by Harvey accelerates the entry of ILS into the flood market.

Our latest cat bond market report, ‘Q2 2017 Cat Bond & ILS Market Report – First double-digit year ahead, $10 billion imminent’, provides much more insight into the record level of issuance seen in the second-quarter, while our range of catastrophe bond market charts and data visualisations allow you to analyse the outstanding market in more detail.

Don’t forget to check out our Cat Bond Market Dashboard as well, for a snapshot of the ILS market.

Note: Artemis’ data on catastrophe bond issuance includes every private transaction we can source information on, as well as full 144A broadly marketed issues. Hence our figures are typically higher than those quoted by broker reports, but we feel this provides a more holistic look at market activity.