Negative returns the order of the day for 2017: Lane Financial

The insurance-linked securities (ILS) and reinsurance market are set to be characterised by losses in 2017, with specialist consultancy Lane Financial LLC saying that “negative returns will be the order of the day in 2017,” but that the impact to the market will be muted by excess capacity.

Lane Financial takes a look at the impacts of recent hurricanes and earthquakes on the catastrophe bond market in its latest quarterly report and discusses the broader impacts to reinsurance and ILS investments.

Whatever the negative returns though, the reinsurance and ILS sector is well positioned to deal with the expected $100 billion plus of losses that are set to be paid, meaning that the impacts to how the market functions will be constrained by its ability to absorb them.

Lane Financial note that; “The loss will not be so consequential as it would if the industry were capital restrained.”

The consultancy said that they do expect to see similar reactions in the reinsurance industry as were witnessed post Katrina, with the potential for new start-ups, company failures and also increased premium availability.

However they explain that this time around, largely due to the excess capacity in the space (also perhaps the greater influence of ILS, we’d also suggest), the consequences for the market will be “much more muted.”

Lane Financial estimates a catastrophe loss of -5.4% for the quarter, using secondary cat bond mark data, with September down -6.51% but this was offset by small gains in July and August, the firm explained.

The firm utilises an index of the outstanding cat bond market, focused solely on catastrophe ILS that are 144a in nature, and from this it allows for some accrual on top of the negative performance to come to a mark-to-market loss of around 10%, which would equal $2.5 billion of the market.

In terms of real losses to the cat bond market though, Lane Financial says that on analysing secondary pricing sheets it believes that these indications currently suggest a market loss of somewhere in the region of $889 million, which seems reasonable based on the price marks we’ve seen of late.

On current data from loss estimates and other sources it does not look as if $2.5 billion of outstanding catastrophe bonds will be triggered by recent events. So far we have the $150 million of IBRD / FONDEN 2017 Class A notes and the $20 million Class C tranche of the Manatee Re Ltd. (Series 2016-1) cat bond.

But up to $1 billion does seem plausible, when you throw in cat bonds like the Casablanca’s, Citrus Re’s, Atlas, Kilimanjaro’s, Galileo’s and Galilei’s, amongst others. All of these currently have tranches of notes marked down in the secondary market.

Not all will face losses though and some may only see a small erosion of principle. It’s also true that we may not even know the full impact to the cat bond market for months, given the often slow development of indemnity triggered claims.

The other mark-to-market losses may never be realised, Lane Financial notes, with some likely to be recovered as losses become clearer and bonds maturing at par.

The consultants believe that part of this is the market pricing in an expectation of higher premiums from future deals as well, which supports the theory that even ILS fund managers are looking for higher prices following the recent loss events and this could help to support reinsurers pricing ambitions at renewals.

Lane Financial forecasts a hard market (see below chart), as the ILS market portfolio is trading at a discount of more than 2% to issue. They expect this to continue into 2018, although just how far that lasts remains to be seen. 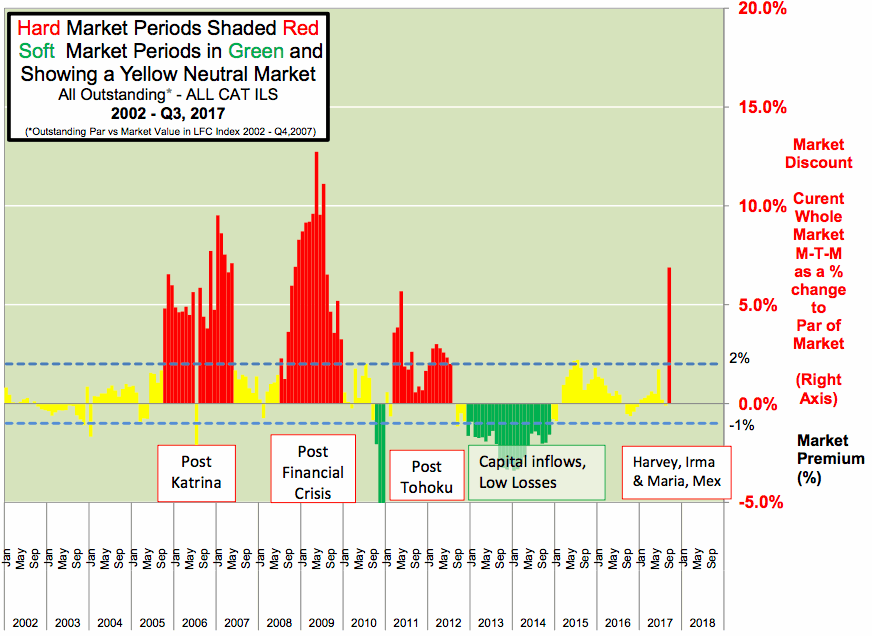 Lane Financial explain that the hard ILS market may be muted as well; “Based on the history we would expect the hard market to be more muted, of lesser amplitude and of shorter duration than previous hard markets. This is firstly because of excess capital in the industry . Secondly, it is because the mechanisms of securitization (new ILS and sidecars, even new protected cells) move extra capital into the industry quicker than previously. Finally, there is capital waiting to deploy to this industry.”

Even including recent losses, or expectations and estimates of losses, the ILS markets return since 2002 compounds to an equivalent return of 7.37%, or 5.65% including the floating rate component.

This demonstrates that ILS remains a very attractive asset class, with very low to zero correlation, for larger, institution al type investors which have a long horizon view of their asset allocations.

That’s the core ILS and catastrophe bond investor base then, of pension funds, endowments, family offices and other sophisticated asset managers. As long as these investors aren’t shocked with any surprises as a result of recent events, they should be expected to largely remain in the ILS market.