Rising reinsurance pricing has boosted the earnings of the big four European reinsurers, despite them all being burdened in 2021 so far by natural catastrophe and COVID-19 related mortality losses.

Fitch Ratings explained that strong premium growth and resilient investment income, alongside fewer non-life claims from the COVID-19 pandemic, meant that all of the big four reinsurers reported improved results for the first nine-months of 2021.

All four of the major reinsurers, Swiss Re, Munich Re, Hannover Re and SCOR, have reported strong premium growth and so have benefited from higher reinsurance pricing during 2021 so far.

Some differences of opinion are clear, in where growth has been targeted though, with Munich Re growing particularly strongly in property and casualty reinsurance, which Hannover Re and SCOR also reported double-digit P&C growth, but Swiss Re only grew in P&C by around 6%.

One of the drivers of lower P&C reinsurance growth for Swiss Re was the firms shying away from aggregate covers and reducing its underwriting of secondary peril catastrophe linked exposures, rating agency Fitch explained. 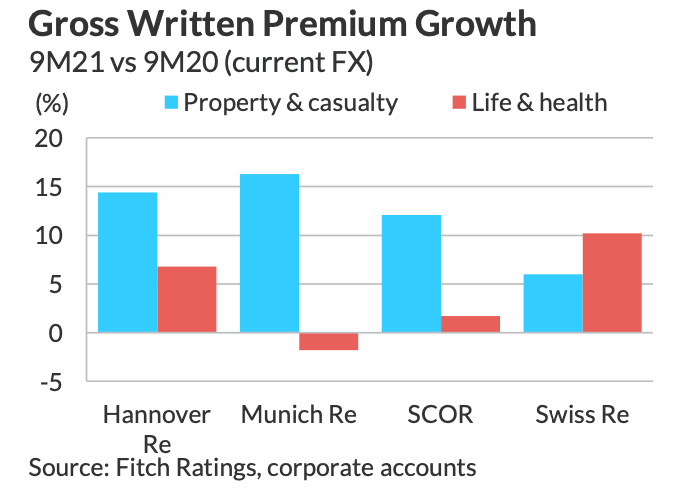 Swiss Re, however, grew the fastest in life and health reinsurance so far this year, as it looked to further grow that side of its business.

All four of the major reinsurers have reported natural catastrophe claims that were above budget for the year-to-date, Fitch said.

The rating agency further explained, “The increase in severity and frequency of nat cat claims driven by climate change will likely force reinsurers to enlarge their nat cat budgets or reduce their risk exposure.”

But normalised for these large losses, the reinsurers all reported combined ratios at 95% or better. 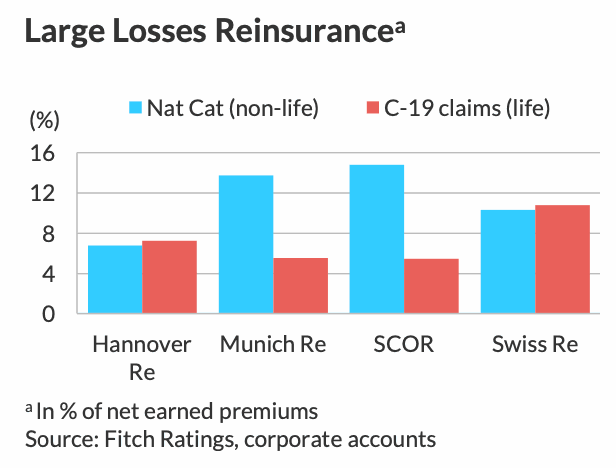 Excess mortality related to the COVID-19 pandemic was the driver of elevated life and health claims for the reinsurance firms, with the US and Latin America the main drivers of loss.

On average, Fitch said that pandemic related claims amounted to 7% of net earned premium for the major reinsurers in 2021 so far, which is up on the average 4.5% disclosed for 2020.

All of the major reinsurance firms maintained strong capital levels, despite the twin burdens of catastrophe claims and COVID-19, Fitch noted.

This has helped them achieve their strong premium growth and Fitch expects all four will seek out additional growth in 2022 as well.

Fitch continues to view the reinsurance sector fundamentals as “improving” saying that “the sector’s financial performance will improve again in 2022 on the back of higher prices in a hardening market environment and a continuous recovery in economic activity.”