Risk modelling firm Corelogic said that the tornado outbreak that struck the Nashville, Tennessee area on March 3rd are likely to cause $1 billion or more of property damage once the impact is fully assessed.

A line of severe thunderstorms coming up from the south struck the Nashville, Tennessee area on Tuesday morning, with a number of long track tornadoes recorded that tore into suburban areas of Nashville and other towns in the region. 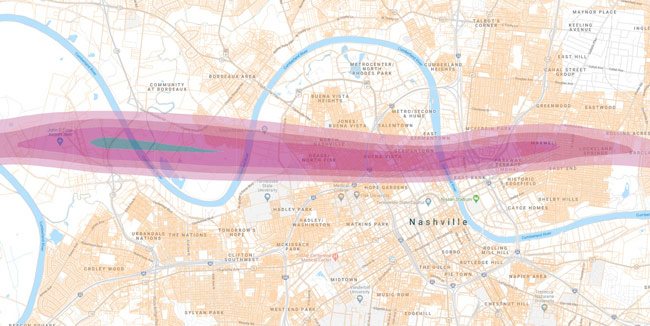 The damage to property has been severe, with tens of, perhaps more than a hundred properties said to be flattened by the severe convective weather outbreak and severe damage seen to some commercial buildings including the John C. Tune Airport in Nashville where a number of planes and hangars were severely impacted.

Damage surveys are in progress and a clearer picture of the impacts from the tornado outbreak is expected in the coming days, but at this time there is little information available on the potential losses that insurance and reinsurance capacity providers may face.

The National Weather Service (NWS) said that damage consistent with EF-3 tornadoes, with winds of between 155 mph and 165 mph, has been reported.

Damage consistent with EF-2 winds of up to 135 mph has been found around the airport and other parts of the Nashville area.

Much of the damage has been related to a supercell system that travelled a long way through the state, dropping a number of particularly long-tracking tornadoes as it went.

Corelogic said that property damage is expected to exceed $1 billion and that there is a 30% chance of its exceeding $2 billion.

Corelogic explained, “The Tennessee tornadoes are preliminarily estimated at an intensity of EF3 to EF4, or Severe to Devastating damage. Nashville, Tennessee, was the community most impacted by this event.

“The Tornado Path Map currently estimates that approximately 250 square miles were affected by the damaging effects of the tornadoes. The current estimate of damaged residential and commercial properties from the 50 mile-long Tennessee tornadic event, extending well beyond the Nashville metro area, is as shown in the table below. CoreLogic expects the total damage to property from this event to exceed $1 billion.”

The company also said that it estimates that 22,389 structures had a 30% or greater damage probability with more than $2 billion in damages from the 50 mile-long Tennessee tornadic with the damage extending well beyond the Nashville metro area itself.

As ever, it’s early days for any estimates and Corelogic’s data is based on potential economic reconstruction cost values of properties in the path of the the tornado and severe convective storms.

But the early damage assessments for this tornado event suggest insurance and perhaps reinsurance market losses will easily extend into the hundreds of millions of dollars, perhaps higher once the commercial impacts and damages to the airport and similar buildings are considered.