Risks to the electric grid due to severe weather, natural catastrophes and climate change can cause losses in the billions of dollars, and while threats make our energy future more uncertain there is a role for risk transfer and potentially the capital markets in helping to stave off economic disruption. 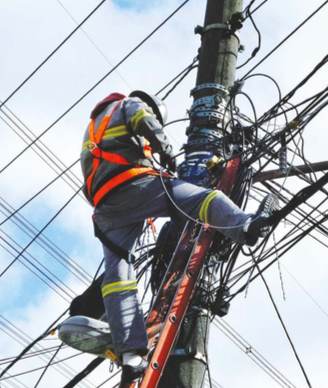 A new report published by reinsurance firm Swiss Re but authored by students at the Johns Hopkins University School of Advanced International Studies (SAIS) explains that the electric grid is among the most important pieces of our critical infrastructure, but is also one of the most exposed to natural disasters, weather and climate related threats.

These threats aren’t always covered effectively either, with electrical utilities often retaining risks related to peak catastrophe or severe weather events and rarely carrying enough business interruption coverage to ensure they have the financial liquidity required post-disaster and are able to offer continuity of service to their customers.

The report states that ordinary physical threats, related to weather and catastrophes, have the potential to be much more damaging to the electric grid’s ability to provide reliable power than even the much-discussed cyber risk.

Data shows that out of 2,428 unplanned electric grid outages in the western United States in 2015, almost a quarter were caused by extreme weather events and environmental variability.

Additionally, data from the U.S. insurance industry shows that there is a US$20 billion to US$55 billion annual financial loss caused by power outages due to flooding, hurricanes and extreme temperatures.

Those numbers are significant, the magnitude of loss that insurance, reinsurance, the capital markets and insurance-linked securities (ILS) players are here to cover and can do so particularly well.

“Climate change is expected to increase the incidence and severity of extreme weather conditions, putting the structural integrity of America’s ageing electric infrastructure under greater strain,” the report explains.

The potential for higher average temperatures, more destructive storms and hurricanes, and an increased risk of wildfire are all expected to increase the risk exposure for electrical utilities.

The electric grid faces threats above ground, due to transmission and distribution lines, as well as below ground where the infrastructure is at risk due to earthquakes. The report studies the U.S. west region where earthquakes are a significant threat.

“According to Oregon’s Public Utility Commission, more than 50 percent of substations would be damaged beyond repair in the event of a magnitude 9.0 earthquake,” the report explains, a scenario that would result in significant financial costs, loss of business in the region and take some time to repair and return the grid to full service.

These risks are currently not addressed sufficiently, the report explains, meaning that there are significant protection gaps that require covering, which innovative financing, risk transfer and reinsurance can all assist with.

Not only is pre-disaster financing provided by insurance solutions required, both for the physical damage, recovery and the business interruption aspects due to prolonged outages, but governments and energy providers also need to address how to make their systems more resilient to future flooding, droughts and earthquakes, the report urges.

One of the issues where the capital markets and insurance-linked securities (ILS) has already been known to assist is with covering transmission and distribution lines.

These core pieces of the electrical grid are often impossible to insure on a traditional commercial basis, usually being too expensive.

In 2003 and 2011 the catastrophe bond market demonstrated that it could take on this risk at an affordable premium, with the two cat bonds sponsored by French energy firm Electricité de France (EDF), the 2003 Pylon Ltd. and 2011 Pylon II Capital Ltd.

Both of these ground-breaking cat bonds provided parametric insurance protection against European windstorm damage to EDF’s transmission network, with the aim being to provide a source of risk capital that would pay out rapidly after a qualifying loss event so as to help EDF get its network back up and running and to minimise downtime. There was also a desire to secure risk transfer for an area of the electric grid that had previously gone uncovered.

The Pylon cat bonds were not repeated after the 2011 deal matured, with EDF turning to traditional insurance we understand although a significant risk remains uncovered today as a result.

Could we see structures similar to Pylon as the threat to electric grid’s from weather and climate related disasters grows?

It’s possible. The report suggests that “products such as parametric insurance and catastrophic bonds are increasingly viewed as part of a comprehensive risk management strategy,” which is true, but it does all come down to affordability and educating the utilities about the size of their coverage gaps.

If education can be accelerated and these utilities recognise the exposure their shareholders or stakeholders are often left to bear, a case may be made for parametric risk transfer, perhaps using the capital markets ILS and catastrophe bonds in collaboration with traditional insurance or reinsurance.

Of course it’s important to remember that many other areas of critical infrastructure, water, gas, sewage etc, are also exposed to increasing threats due to weather, catastrophe and climate and those utilities are often unprotected as well.

The utilities sector presents some opportunities for risk transfer to narrow coverage gaps that could provide significant support to get critical infrastructure back on-line after disaster strikes.

The full report from Swiss Re can be downloaded here.