The capital markets and fully-collateralized reinsurance capacity have helped reinsurer Everest Re achieve continued growth, by adding to its available capacity to help it underwrite more premiums across the group and at the same time increasing the firms net margins.

Everest Re has been leveraging the capital markets as a source of additional capacity, as retrocessional risk transfer, and through partnering with investors as a way to put its underwriting expertise to work and earn fees, for some time now and the strategy is clearly helping the company continue its expansion.

Mt. Logan Re, the third-party capital backed collateralized reinsurance sidecar-like vehicle has become a core component of this strategy and assets under management in Mt. Logan Re’s strategies grew to $949 million at the 1st July 2017.

That’s an increase of 9% since the end of 2016, when Mt. Logan Re’s AuM was reported as $869 million, reflecting the fact that Everest Re continues to find opportunities to deploy property catastrophe reinsurance capacity, which was also reflected in the companies second-quarter results.

Everest Re reported its Q2 2017 results yesterday, revealing an increase in gross premiums written which were up 17%, helping to drive profits higher with after-tax income rising almost 70% to $227.5 million, as reported by our sister site Reinsurance News.

Everest Re continued to find growth across most of its reinsurance underwriting hubs, despite the challenging nature of the soft global marketplace. The addition of capacity sourced from third-party capital market investors will be assisting here, as it allows the reinsurer to utilise efficient capital and to better optimise its own reinsurance book.

As well as the growth in the Mt. Logan Re collateralized reinsurance vehicle, Everest Re has also significantly increased the size of the cat bond risk capital outstanding this year, with the addition of $1.25 billion of capacity from two Kilimanjaro Re issues this year (details on every Everest Re cat bond can be found in our Deal Directory).

That bumper 2017 cat bond issuance takes Everest Re’s total cat bond risk capital outstanding to $2.825 billion, which makes the reinsurer the biggest single sponsor of cat bonds in the market currently, according to our chart of the outstanding market broken down by sponsor. 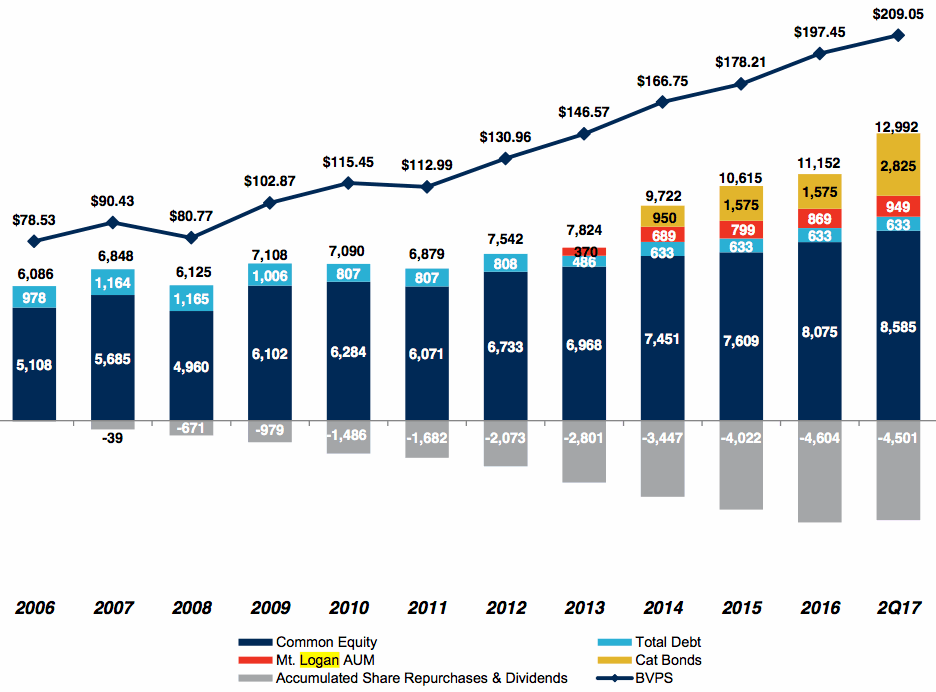 The chart above shows how Everest Re has been growing its capital base, with the capital markets portion growing in size significantly in recent years, thanks to the steady increase in AuM at Mt. Logan Re, as well as the increasing use of catastrophe bonds.

As recently as 2012 Everest Re did not have any collateralized AuM from a vehicle it owned or any cat bond support.

Now, as of the mid-point of 2017, Everest Re benefits from an impressive $3.774 billion of collateralized AuM and cat bond capacity, which will have added significant capital efficiency to its underwriting base.

The use of capital markets capacity as a way to underwrite more risk, generate an optimised portfolio, earn fee income from third-party investors and access efficient sources of retrocession is clearly paying dividends at Everest Re. In total, the firm now counts $13 billion of capacity, up from just over $11.15 billion at the end of 2016, with the cat bonds the largest contributor to this growth.

Everest Re uses the capital markets platform it has created, between Mt. Logan Re and the catastrophe bonds, to generate fee income on business that is too large to remain on the reinsurers balance-sheet. This strategy has enabled the company to grow without becoming over-exposed to business that does not suit its own capital profile, which has also helped the firm to better optimise the portfolio as it has expanded its specialty and primary insurance businesses.

The company sees itself as “a natural and high regarded partner for the investors seeking responsible underwriting partners,” which has certainly been evidenced by the response to its capital market strategies.

The way Everest Re is leveraging third-party capital is certainly helping the firm to grow, providing income that helps it to maintain its returns to shareholders even at times when the market is challenging, and positions the company well for taking advantage of any turn in the market.

At the same time it positions the reinsurer well should no major change in the pricing cycle appear, as it is adding plenty of efficiency to its underwriting capacity through partnerships with the capital markets.