Mt. Logan Re AuM & cat bond assets shrank at 1/1 for Everest Re

Everest Re had been building an increasingly larger contribution from third-party reinsurance capital to its overall capital base in recent years.

Capacity provided by third-party investors in the Mt. Logan Re vehicle and Kilimanjaro Re cat bond series contributed almost 32% of the reinsurers overall capital at the end of 2018.

Catastrophe losses is part of the reason for the shrinking in terms of third-party assets contributed to Everest Re’s overall capital base.

Mt. Logan Re, the reinsurers fully collateralized reinsurance sidecar and segregated accounts vehicle, shrank considerably at the end of 2019.

But as of January 1st 2020 this figure had shrunk to $819 million, likely on the impact of losses from catastrophes during the last year, as well as some loss creep from prior years and then perhaps exacerbated by the more challenging capital raising environment for insurance-linked securities (ILS).

On the catastrophe bond side, the reinsurers Kilimanjaro Re cat bond program provided it with $2.9 billion of third-party retrocessional capital as of the end of 2018.

It means that third-party capital is now contributing only 26% of Everest Re’s overall capital base, which is the lowest percentage for a few years. 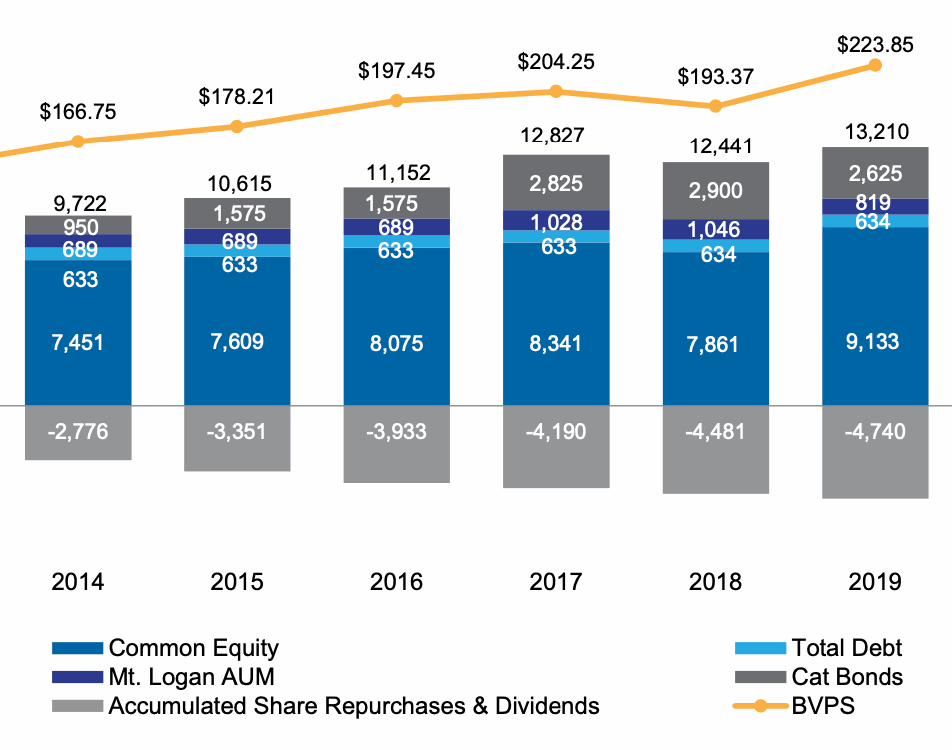 That’s a clear reflection of the significant impacts from catastrophe losses, which drove the reinsurers fourth-quarter 2019 to an underwriting loss as our sister publication Reinsurance News has just reported, but also of the more challenging environment for raising fresh ILS investor capital at this time.

Mt. Logan Re assets under management are now back at levels last seen in 2017, prior to the major hurricane activity that year.

Given the way the reinsurance market is moving in 2020, there should be opportunities to begin to gather new capital inflows for the vehicle this year, as long as fresh losses remain lower. It’s a similar experience to numerous other ILS players, with ILS capacity constraints continuing as we recently explained.

On the catastrophe bond side, we’d expect Everest Re may bring additional Kilimanjaro Re cat bonds through 2020, as market conditions are conducive to fresh issuance.

Having the two third-party capital strategies gives the reinsurer some flexibility, meaning it can upsize on its catastrophe bond issues, while Mt. Logan Re rebuilds its capacity, if the company so chooses.

Part of the reason for the shrinking of the contribution percentage of third-party capital for Everest Re is the fact its equity base has grown significantly though.

Common equity has risen significantly in recent years, now reaching more than $9.13 billion, up 16% in just one year.

That bodes well for the reinsurance firms future opportunities, also for it needing increasing amounts of retro to manage volatility in its clearly much larger underwriting book as well.

All of which suggests that the company will continue to leverage third-party reinsurance capital in all its forms, meaning fresh cat bonds and capital raising for Mt. Logan Re are likely in the future.

Also noteworthy is the continued expansion of the insurance book at Everest Re, which could give the company an opportunity to help third-party investors share in that business as well, perhaps using a segregated account of Mt. Logan Re.

As ILS investor appetite for getting closer to sources of risk persists, this could provide another avenue for bringing fresh third-party assets into the reinsurance firms business structure.