A Category 5 hurricane striking the Miami area of Florida, as 2017’s Irma looked set to do, would result in over $200 billion of insured residential property losses alone, according to Karen Clark & Company (KCC), suggesting the full toll to insurance and reinsurance interests would be much higher.

Catastrophe risk modelling specialists Karen Clark & Company (KCC) said that such a strong Category 5 storm is among the worst case scenarios it has in its catalogue of more than 90,000 hurricanes and very similar to the scenario hurricane Irma at one time threatened back in 2017. 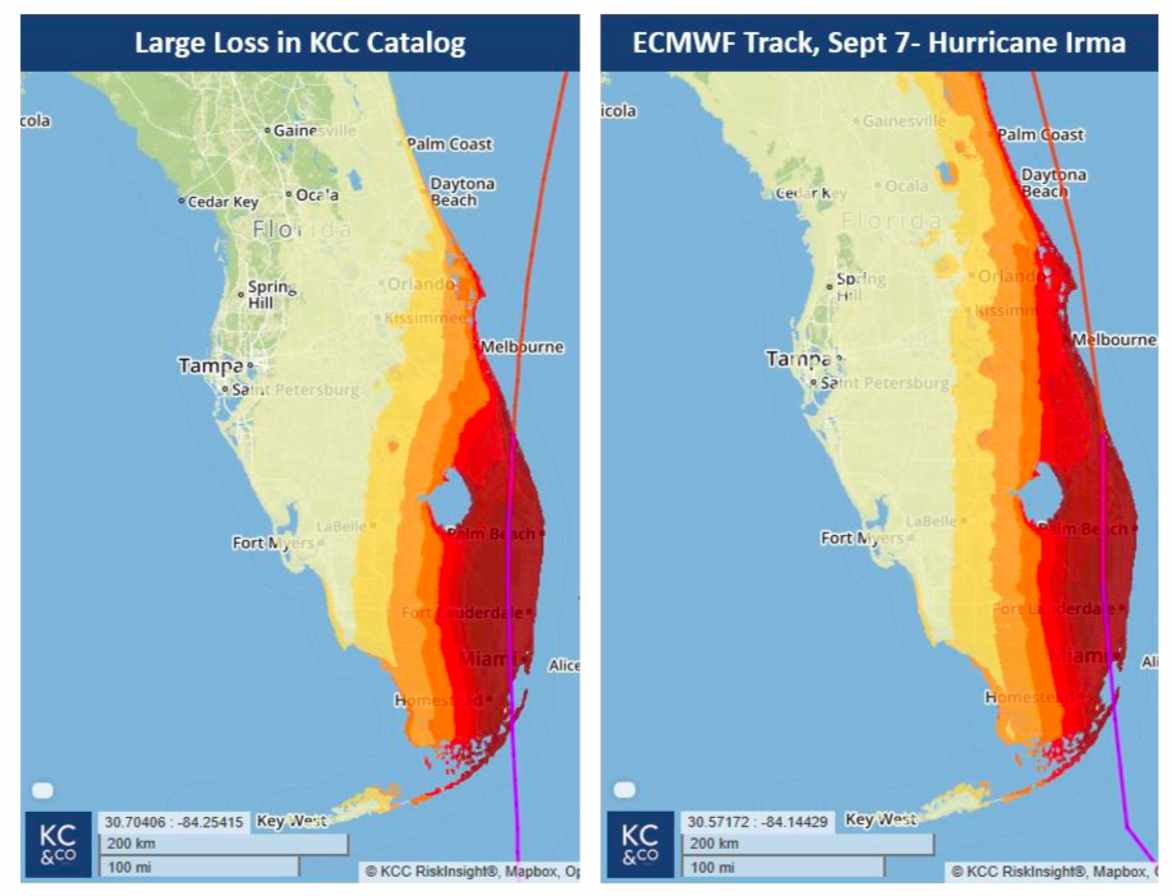 The fact a $200 billion plus loss could come from residential insured property losses alone is significant, as commercial property losses can make up as much as 10% or 20% of a hurricane impact on Florida and the Miami region would see this towards the higher-end, we’d assume, given the high value commercial buildings in the area.

As well as the direct insured impacts, plus contingent impacts, all of which would take their toll on reinsurance and insurance-linked securities (ILS) capital sources, there would also be less direct impacts to come from damage to infrastructure from such a powerful storm, which would exacerbate the business interruption and mean it took the state of Florida and Miami-Dade area in particular, much longer to recover.

That makes this hurricane risk model the first new model certified by the FCHLPM since 2006, KCC said.

“The rigorous Florida review process consists of multiple steps, including an audit by the Commission’s Professional (“Pro”) Team of experts,” explained Glen Daraskevich, KCC Senior Vice President. “The Pro Team spent seven days on site at KCC’s Boston offices thoroughly reviewing every component of the model. KCC’s own experts then presented the model to the Commission in Tallahassee where the 33 standards, spanning the disciplines of meteorology, wind engineering, statistics, actuarial and computer science were presented and voted on one-by-one. Every standard was unanimously approved by the Commission.”

Importantly, the Characteristic Events enable insurance and reinsurance firms to look at their vulnerability to solvency-impairing losses.

“The Pro Team and the Commission saw the transparency of the KCC model,” Daraskevich said. “The KCC team was able to demonstrate visually the high resolution wind formulations and other aspects of the model, allowing the model components to be verified.“

Looking at the strong Cat 5 Miami hurricane, KCC said that this storm would be very similar to the track hurricane Irma looked set to take when it was approaching Florida, before that hurricane veered back to the west.

This scenario would have seen a strong Category 5 hurricane making landfall near Miami, tracking north through the densely populated areas of Fort Lauderdale and Palm Beach.

The result would be the greater than $200 billion residential property insured loss, showing that the industry really dodged a bullet with the westward track that 2017’s hurricane Irma took.

Given the issues surrounding claims and social inflation that was experienced with hurricane Irma anyway, it’s hard to imagine just how complex the situation for reinsurance markets and ILS funds could have been if the storm had struck the Miami area.

Such a scenario could have wiped out a significant chunk of the catastrophe bond market and trapped an enormous amount of collateralized reinsurance capital as well.

It’s previously been said that a hurricane Andrew-like category 5 storm that struck Florida in the Miami area would cause a loss of as much as $6.3 billion to the catastrophe bond market. But that was based on an insurance and reinsurance industry loss of around $57 billion, not $200 billion plus.

If a loss creep of a similar percentage magnitude to hurricane Irma followed as well, this would have been a truly catastrophic loss event for the reinsurance and ILS market.

KCC’s hurricane model also shows that the long run average annual losses from hurricanes, including all lines of business, are estimated at $7 billion for the state of Florida, which is around half of the U.S. total.