Mexico has been hit by another major earthquake yesterday. The magnitude 7.1 temblor struck at 18:14:39 UTC (13:14 local) on Tuesday 19th September, with the epicentre near Atencingo in Puebla state, 75 miles from Mexico City. Extensive damage has been reported to buildings and the death toll stands at over 200 this morning.

The earthquake will result in insurance and reinsurance claims given the region it has impacted includes the capital city of Mexico. However, this earthquake at M7.1 is not sufficiently high on the magnitude scale to trouble the IBRD / FONDEN 2017 catastrophe bond. 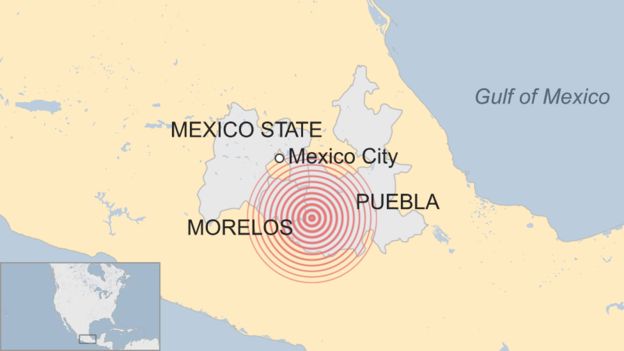 Buildings have been reported toppled in Mexico City and other towns in the region, pictures and video footage show significant structural damage in the capital.

As of 08:00 UTC the latest reports suggest there have been 216 deaths due to the earthquake, a number which is likely to rise further.

The earthquake struck at a depth of 51km with shaking reported for a number of minutes. The geology of the region means shaking from quakes can be severe and in this case there has been a sideways motion that tore some buildings to the ground.

The BBC reports that 86 of the deaths are from Mexico City itself, with 71 people killed in Morelos state to the south of the capital, 43 reported dead in Puebla state, 12 in Mexico State, 3 in Guerrero and 1 in Oaxaca.

In Mexico City alone there are reports of over 44 locations where buildings have either collapsed or been badly damaged, including a school where the tragic deaths of at least 20 children have been reported, a six storey apartment block, a supermarket and a factory.

The recently issued FONDEN 2017 catastrophe bond, that provides the Mexico government with a $360 million source of earthquake and named storm disaster insurance protection, is likely safe from this quake event.

The FONDEN cat bond was triggered by the 8.1 magnitude quake that struck off the coast of Mexico on September 8th, which is expected to exhaust the $150 million Capital-At-Risk Series 113 tranche of Class A notes which are exposed to earthquakes striking Mexico.

That September 8th earthquake was close to the edge of the parametric trigger box, where as this recent M7.1 quake struck right in the heart of the parametric zone being so close to Mexico City, the area with the highest insurance and reinsurance market penetration in the country.

But at M7.1 this second quake is likely not high enough on the richter scale to trouble the cat bond, which is still going through a calculation process right now, despite the fact this earthquake looks to have been much more severe in terms of damage and impact to lives.

As we wrote on September 12th, there appears to be some collateralized reinsurance or private ILS arrangements exposed to earthquakes in Mexico and with this quake causing significant property damage in the capital city these arrangements could now be at risk of loss.

Global reinsurance firms and also some retrocession providers will also face some losses from this second Mexican earthquake, with the levels of property damage reported suggesting that exposed insurers will trigger reinsurance programs.

The earthquake will add to losses the global reinsurance firms and retrocessionaires are expecting after hurricanes Harvey and Irma, with aggregating losses from recent events potentially eroding some retro layers that are exposed to multiple pillars or categories of risk.

Homeowners in Mexico generally have little if any earthquake insurance coverage, but commercial interests can buy protection from global commercial insurance markets, which would include the commercial operations of the major reinsurers.

Analysts at Morgan Stanley noted that re/insurers took a $9 billion industry loss from a quake in Chile in 2010, which could be the closest comparison in recent history. This event eroded between 2% and 6% of the book value of reinsurers Morgan Stanley analysts cover.

AIR Worldwide estimated that the September 8th earthquake in Chiapas region, Mexico will result in a an insurance industry loss of between US $786 million to US $1.124 billion. This latest quake looks like it will be more costly, given the extent of the property damage seen in footage this morning.