A magnitude 7.2 earthquake that struck southwest Mexico in the Oaxaca region, causing buildings to sway in the capital Mexico City over 200 miles away, has hit directly within the parametric trigger zones for the recently issued World Bank supported IBRD CAR 118-119 catastrophe bond, but the magnitude is unlikely to be high enough to trigger the bonds.

It looks like the new Mexico earthquake cat bond has had a near miss, as this 7.2 magnitude quake appears unlikely to be strong enough to activate the parametric trigger for the notes (this is based on our preliminary analysis, not an official determination). 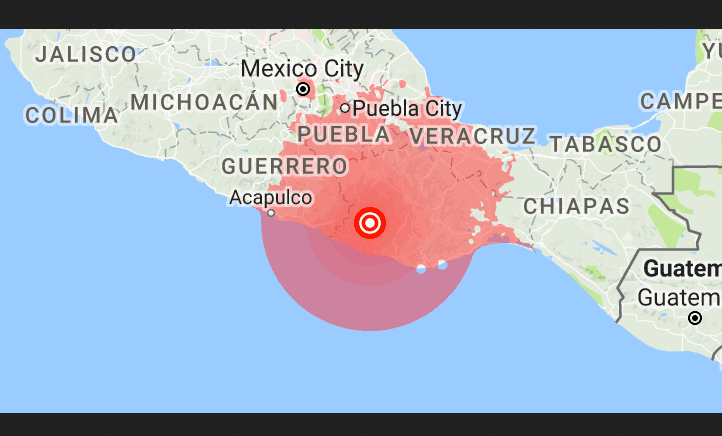 The location of the magnitude 7.2 Mexico earthquake

The $260 million Mexico earthquake cat bond, issued as part of the $1.36 billion Pacific Alliance cat bond deal, is structured in two tranches of notes, one lower and one higher risk layer, with both able to be triggered for payouts of 50% or more of the investor principal.

For an earthquake event to trigger the cat bond though it needs to fall within a specific geographic box and have a magnitude high enough, corresponding with the location, as well as meet other parameters such as depth, in order for a payout to be required.

In the case of this magnitude 7.2 Mexico earthquake, while the epicenter is firmly within the parametric trigger zone and at 24 kilometres deep it meets the depth parameter easily, it looks like it is not a high enough magnitude to trigger the notes at this specific location.

We don’t have access to the necessary data files to be able to say for certain that the notes are safe. We have seen a colour coded map of the parametric trigger arrangement, which suggests that a magnitude of 7.8 or greater would have been required to trigger the cat bonds riskiest tranche, based on the location of the earthquake.

But today’s quake will provide an early warning to investors that the new World Bank cat bonds are now on-risk and for the Mexican government a reminder that it has a source of capital market disaster insurance in-place for the next major event that does occur.

Today’s earthquake has thankfully not caused severe damage or deaths, according to news reports. Some buildings have been damaged in Oaxaca state, but in this case it seems a triggering of the cat bond would not have been necessary anyway, as the damage costs are not expected to be that high.

That shows the structuring of the cat bond and the design of the trigger has been thought through well enough to mean the notes are not unnecessarily triggered by a quake that has not been particularly impactful to Mexico.

Update: Specialist catastrophe bond and ILS fund manager Plenum Investments said in a note on this event, “It can be ruled out that the Mexico earthquake tranches of the CAT bond issue of the Pacific alliance, which were issued at the beginning of the month, will be affected. The riskier tranche would start making a partial payment only if the magnitude exceeds 7.9 in the affected region.

“We therefore do not expect any negative impact in the Plenum CAT Bond Fund, especially since we only hold the less risky tranche in our portfolio, whose parametric triggering of payments for the affected region would begin at a magnitude of 8.5.”

« Older article AXA not renewing its Calypso cat bond for 2018