The recent devastating flooding that struck the state of Louisiana in August are estimated to have caused an economic loss of between $10 billion and $15 billion, with public and private insurance or reinsurance likely to pick up a bill in the “low-digit single billions (USD)”, according to Aon. 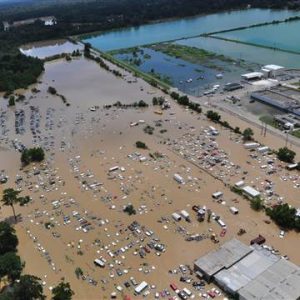 The U.S. state of Louisiana was hit by storms, torrential rain and severe flooding between the 11th and 15th August 2016, causing widespread damage, with meteorologists calling it the latest in a series of recent 1-in-1000 year rainfall events.

Global reinsurance broker Aon Benfield’s risk modelling and analytics team Impact Forecasting said in its latest monthly catastrophe report that extreme rainfall that struck parts of the United States Gulf Coast and Midwest, causing catastrophic flood damage across several communities, will result in what many would see as a particularly significant economic loss.

Total economic losses are estimated at between $10-15 billion, while Impact Forecasting estimates that public and private insurance industry losses are expected to be in the low-digit single billions (USD).

The reason for the low percentage covered by insurance or reinsurance is down to low participation in the National Flood Insurance Program (NFIP) in that region, as well as a lack of private flood coverage options, which Impact Forecasting says has resulted in over 80% of damaged homes not having flood cover.

As we wrote in August, while what insured losses there have been from this event will be largely covered by the National Flood Insurance Program (NFIP) and primary insurance, the recent severe floods in Louisiana are likely to see at least some of the burden covered by reinsurance capital.

Steve Bowen, Impact Forecasting director and meteorologist, commented on August’s catastrophic activity “August was an active month for global natural disasters, led by two major catastrophes: historic flooding in Louisiana and a major earthquake in central Italy. While both these events were multi-billion dollar disasters, unfortunately, the vast majority of the losses are likely to be uninsured, further exposing the reality that certain perils remain vastly underinsured regardless of region. Indeed, as we enter the final third of 2016, roughly 75 percent of the year’s disaster losses have been uninsured.”

Other natural disaster events that struck around the globe during August include:

You can access the full report from Impact Forecasting here.