The level of activity in pension de-risking as a whole has been high in 2018 so far, with longevity swaps amounting to £2.3 billion transacted, along with £8.1 billion of bulk annuities deals. But Willis Towers Watson questions the availability of capacity for the end of this year.

With more than £10 billion of buy-in, buyout and longevity swap transactions by defined benefit (DB) pension funds already this year, Willis Towers Watson (WTW) says that it expects 2018 will become a record year for pensions de-risking. 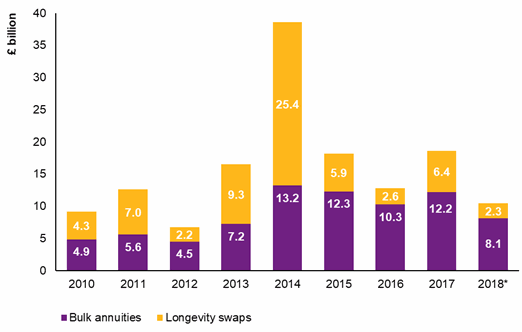 The firm sees a strong pipeline for the rest of the year, expecting over £20 billion of bulk annuity transactions will be completed as well as longevity swaps.

WTW alone has 15 live bulk annuity deals and 6 live longevity swaps in the pipeline, hence it is expecting a flurry of activity that could eat up available capacity.

Shelly Beard, Senior Director in Willis Towers Watson’s Transaction team, commented, “As we anticipated at the start of the year, highly attractive buy-in pricing across the market has meant a significant increase in bulk annuity transactions so far in 2018, with more to come. We currently have 15 live bulk annuity deals in the pipeline, along with 6 live longevity swaps, so I expect this high level of activity to continue through the second half of the year.”

WTW says that buy-in pricing is still at historically attractive levels, which it believes will drive execution on numerous deals by the end of the year.

In fact WTW highlights that, “four bulk annuity deals had already been concluded that exceeded the biggest transaction of 2017, with further “mega-deals” anticipated in the second half of the year.”

But the activity levels mean that questions are now being raised over availability of insurance and reinsurance capacity to back the expected transactions, meaning pensions looking to de-risk may have to delay.

Beard explained, “How long this level of activity will be sustained is more questionable. The kind of ‘end of year sale’ seen in previous years is unlikely to materialise this year, because insurers will already have met their annual new business targets. Schemes considering approaching the market now should be aware that they may need to delay transacting until early 2019 to ensure optimal pricing.”

Looking ahead the questions over capacity levels continue.

“In the longer term, there are also question marks over whether demand for bulk annuity deals will at some point outstrip the supply of suitable illiquid assets and longevity reinsurance, two key drivers of the recent attractive pricing,” Beard said.

Availability of longevity reinsurance is key and should there be a crunch on this capacity it could be down to the capital markets to step in.

ILS funds with life strategies are already allocating capital to longevity risks where they can and should the traditional reinsurance market find it has had enough of longevity risk, these funds are likely to find ways to deploy more capital as a result.

The figure for 2014 demonstrates the capacity question though, as should major longevity swaps be brought to market the volume of supporting longevity reinsurance capacity required will be significant and the capital markets could become a more called-on provider of it.