London has the potential to become the international hub for innovative insurance-linked securities (ILS) transactions so long as the UK regulator shows support, according to Des Potter, Head of GC Securities, EMEA, Guy Carpenter.

As the UK continues to target the release of a regulatory framework for the facilitation of ILS transactions, which is now expected to come into force by the end of October, there’s an opportunity for the region to become a global hub for the expanding alternative capital, or ILS space.

This is according to Guy Carpenter’s Potter, who recently underlined the potential for ILS in London, while calling for support from the regulator.

“If we can leverage London’s broking, underwriting and actuarial talent to provide innovative solutions to big challenges such as the protection gap in both mature and emerging markets, London can become the global centre for reinsurance risk transfer.

“The U.K.’s success has got to be based on innovation. The goal is not to stem the flow of business going to Bermuda or to grow London’s market share of cat bonds, but to take ILS to its next stage of evolution using the unique skillset we have in London,” said Potter.

In recent years, London’s share of the global reinsurance market has declined. This is evidenced by a London Market Group report that shows London’s share falling from 15% in 2010 to 12.3% last year. 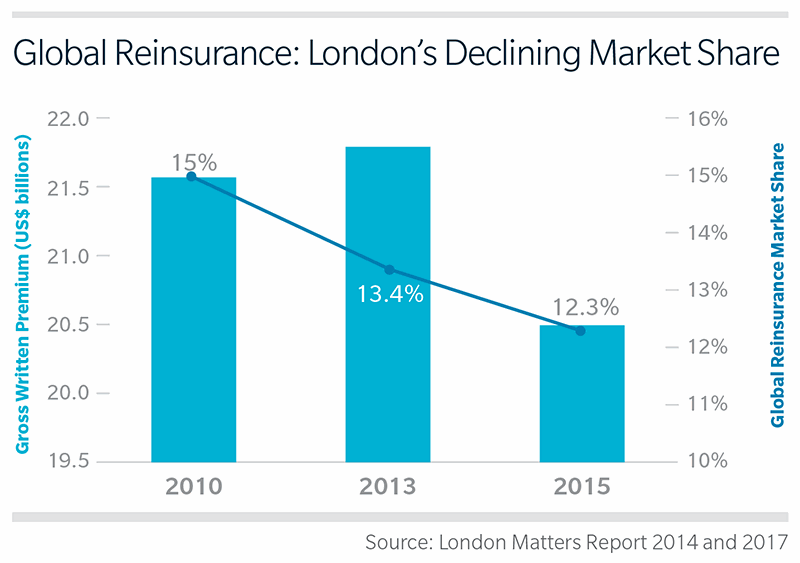 Part of the reason for this decline, according to Potter, is the efficiency and lower cost of capital in ILS business in other jurisdictions, such as Bermuda.

“After the next major property catastrophe loss event, reinsurers will almost certainly turn to the ILS market for recapitalisation. Right now, London’s infrastructure is not efficient enough to allow capital to be deployed quickly or cost effectively.

“If there were another Katrina tomorrow, it would take the U.K. many months to approve plans for capital to flow in, in which time Bermuda would have raised billions. London’s market share could drop materially within a few weeks of such an event,” explained Potter.

The ILS framework for London is still awaiting approval from the UK parliament, but it is expected to come into force by late October, and Potter feels that once in action London will be in a better position in the global reinsurance market.

“I do believe London’s ILS market will gain traction. The regulator will face a learning curve initially, but over a five-year horizon I really believe that, with its access to both insurance talent and financial markets capital, London can offer a market-leading alternative for risk transfer to the capital markets,” said Potter.

The ILS space continues to expand, underlined by persistent growth in the collateralised reinsurance segment and the unprecedented volume of catastrophe bonds issued in 2017, so the sooner London is able to take advantage of this opportunity the better equipped it will be to remain relevant and maintain market share in a rapidly changing industry.