Local factors could intensify hurricanes in 2015, despite low forecasts

More forecasters have joined the call for another below-average Atlantic hurricane and tropical storm season in 2015, but some warn that localised factors near to the U.S. coastline are conducive to storm formation and intensification.

The 2015 Atlantic Hurricane Season looks set to repeat recent years which have seen below-average number of tropical storms forming and fewer hurricanes than usual. Or course it’s worth noting that it isn’t the number of storms that matters, it’s the chance of a storm striking the U.S. coastline that really bothers insurance, reinsurance and insurance-linked securities (ILS) markets.

Weather Services International (WSI) goes along with the below average expectations for the 2015 Atlantic hurricane season, predicting nine named storms, five hurricanes, and one major hurricane. These numbers are lower than both the 1950-2014 normals of 12/7/3 and the more recent “active period” (1995-2014) normals of 15/8/3.

WSI Chief Meteorologist Dr. Todd Crawford explained; “Both the dynamical models and our proprietary statistical models suggest a relatively quiet tropical season this year. Aggregate Atlantic basin sea surface temperatures are as cool as they’ve been since 2009, and are at the second coolest levels in 20 years. Meanwhile, in the Pacific, a new El Nino event is emerging that will likely be stronger than last year’s weaker event. The cooler ocean temperatures and subsidence/shear associated with the El Nino event will likely be a deterrent for widespread tropical cyclone development in the Atlantic.”

WeatherBell Analytics LLC meanwhile also opt for a below average forecast for seasonal activity. WeatherBell forecasters predict 7 to 9 named storms, 3 to 5 hurricanes and 1 to 2 major hurricanes.

However, despite WeatherBell forecasting below average numbers in terms of storm formation and development, forecaster Joe Bastardi explains that there are risks attached to this season which could result in conditions that could strengthen any storms that do form.

WeatherBell’s forecast shows that conditions in the Gulf of Mexico and nearer to the U.S. coastline are conducive to above average chances of storm formation or intensification, where as the tropics where storms usually form are less so.

That suggests that we could see a few storms spin up in the Gulf, or that any storms that do make it out of the tropics towards the U.S. coastline could find conditions conducive for intensification nearer to landfall. These are conditions that could make for a very uncertain Atlantic hurricane season in 2015 and that insurers, reinsurers and ILS players should keep an eye on. 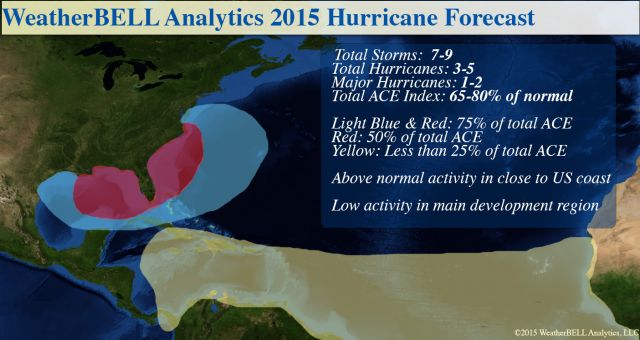 WeatherBell 2015 Hurricane Forecast map - Note: Anything in the 50% has to be scored in the 75% too, so, that is the reasoning in the overlapping areas. The targeted area is shifted west from last year to include major energy zones. The lack of ACE in the Main Development Region is highlighted.

As the graphic above, from WeatherBell, shows there is a chance of conditions being more conducive to tropical storm and hurricane formation and intensification nearer to the U.S. coastline. In the 20 years we’ve been following hurricane seasons some of the storms that have formed near the coast, or intensified rapidly near to land, have been among the most impactful to insurers given the lack of notice meaning policyholders cannot make preparations as easily.

Joe Bastardi explains in the WeatherBell forecast, in which he discusses that local factors in terms of sea surface temperatures near to the U.S. coastline, or in the Gulf of Mexico, will be key to eventual storm.

That is one of the great unknowns with hurricane season. No matter how low the forecasts are, all it takes is one storm to track towards a populated area of coastline and encounter above average sea surface temperatures and all bets are off, as far as impact from the season is concerned.

Bastardi explained how much these local patterns will matter in 2015; “I believe tropical cyclones are in large part due to the entire global pattern. However, this year is one of those stand-alone type years because of the extremity of the warm water near the coast. The local patterns at the particular time when there is a development threat will be huge this year, rather than the large-scale pattern.”

The overall pattern in the Main Development areas of the Atlantic is brutally hostile – warm water north of cold. The evolving El Niño is a big factor, but we have had El Niños like 1969 and 2004 that had big ACE years (this has to do with a 400mb mixing ratio theory I have, which I will not bore you with now).

Some of the hostility in the global patterns can be seen currently over India. There, it is raining early this spring and this is forecasted to continue. This is not a sign of a healthy monsoon. Instead, it usually means the monsoon comes on late. To continue this missive, if we assume that each year, there are a certain amount of tropical waves that traverse the tropical oceans, the cool water in the Southwestern North Pacific (with warm water in ENSO 4) implies a great deal of convergence in the Main Development of the Western Pacific. A lot of westerly moving waves there will accomplish the “goal” of the tropical season (to correct hemispheric heat imbalances by moving energy from the Tropics to the Poles). A big Western Pacific year is in store, and this rarely pairs with a big Atlantic year.

However Bastardi once again highlights the warmer than normal sea surface temperatures along the U.S. coastline and in the Gulf of Mexico:

“However the U.S. is not in the Deep Tropics. A close-up of the U.S. coast reveals big problems with the SST pattern,” Bastardi explains. 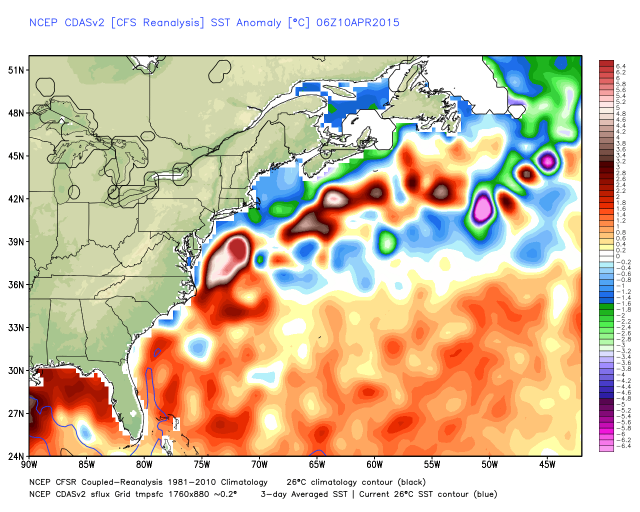 And next the Gulf of Mexico SST anomalies: 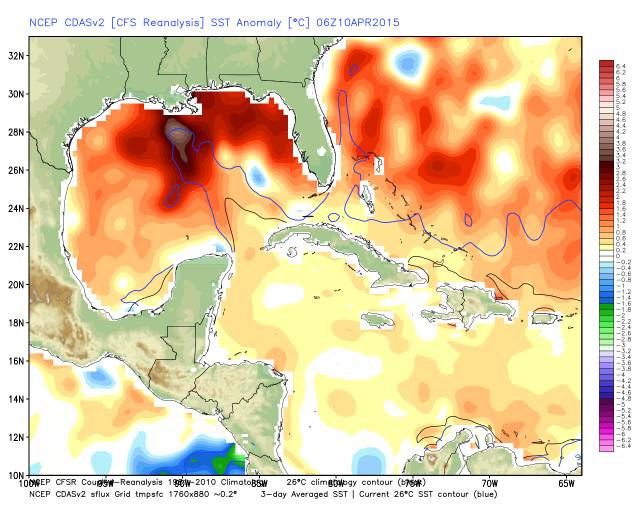 On the Gulf of Mexico in particular, Bastardi warns; “That looks like a great Gulf of Mexico warm “Loop Current” and that is a signature for strong storms there.”

So far this year, the Western Pacific ACE is off to the fastest start since 1958. That is the big problem for me. Hemispherically, the closest overall pattern this year in both the Pacific and Atlantic is the late 1950s. In spite of the coming moderate El Niño event, 1957 produced Category 4 Hurricane Audrey in the Gulf of Mexico in June and the vastly under-known Helene in 1958 was a powerful Category 4 that came within 10 miles of Cape Fear (North Carolina was in the eyewall, but that is not a technical landfall).

Dr. Ryan Maue made a good point after Dr. Klotzbach (from CSU), who I think is great (we use the Gray/Klotzbach AMO), came out with an ACE forecast of 40. Dr. Maue said that one “fish storm” (big hurricane that meanders in the Atlantic north of 30°N and jacks up the ACE can blow that out of the water. He beat me for a steak dinner in 2012 because of three of them did that! That being said I can see 40% normal ACE being achieved (the ECMWF is 50%).

Finally, Bastardi warns that while the 2015 Atlantic hurricane season may be slow and below average most of the time, the conditions look conducive for their to be peaks of activity and the potential for a single devastating storm to occur remains.

The huge message is this. Unlike last year, the Gulf of Mexico is open for business. I would be surprised, given the cycle we are in and the warmth of the water, if there is no major impact storm (by my scale) or major even by NHC’s Saffir-Simpson scale this year. Once within 200 miles of the U.S. coast, the El Niño and harsh Main Development Region conditions don’t mean anything.

I fear a scenario like the late 1950s. Audrey in the Gulf of Mexico and Helene in the Carolinas. There is no assurance you can’t have two similar storms in one year, nor an assurance that one shows up and gets driven into New England. There is far greater confidence in the lower than normal idea farther to the south. The entire season may have us asleep 75% of time, but the 25% of the time we have to be awake, it may lead to great wailing and gnashing of teeth.

So while across the entire hurricane season the forecast points towards fewer storms forming, one of the forecasters we follow is warning that there remains significant potential for tropical storms and hurricanes that cause losses to the insurance, reinsurance and ILS industries.

The forecast doesn’t make it easy for re/insurers and ILS players, suggesting that in 2015 it will be especially important to keep an eye on the tropics for development and also on waters nearer to the U.S. coastline, in case any depressions make it through and intensify rapidly.

That is perhaps the worst conditions for ILS investors, who would clearly prefer as much notice as possible that a hurricane is bearing down on the U.S. coastline. Notice allows for risks to be hedged or offloaded in the secondary market.

If a major storm brews up just off the U.S. coast, offering no notice to ILS investors and ILS fund managers, it’s more likely that positions will be difficult to sell (at least at a reasonable price) and it may be too late to hedge.

As ever there’s no guarantee of what exactly will happen. It looks like storm formation in the deep tropics will be limited by climatic and weather conditions, but that depressions approaching the U.S. coast could intensify or suddenly become hurricanes.

The average hurricane season prediction across the forecasters we track here at Artemis is now calling for 9.8 named storms, 5 hurricanes and 1.7 major hurricanes. That is certainly sufficient to cause significant insurance industry losses should WeatherBell’s thoughts about the SST’s near the U.S. coast prove correct.

Especially important to keep an eye on the season as it develops this year, and you can do exactly that over on Artemis’ 2015 Atlantic Tropical Storm & Hurricane Season.