The Insurance Development Forum (IDF), an international group consisting of insurance and reinsurance industry representatives, in partnership with the World Bank and the United Nations (UN), has announced the appointment of leading industry CEOs. 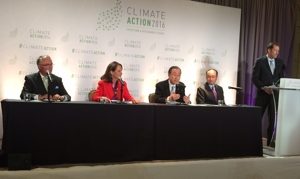 The IDF was established to support governments across the globe against the rising threat of natural disasters and climate risks, to create a clearer understanding of risks, improving global resilience and increase re/insurance penetration, globally.

Talks in Paris during COP21, the Sendai meeting in Japan, and the UN Sustainable Development Goals, underlined a need for the risk transfer community to work with public sector entities throughout the world to improve disaster resilience against nat cats and climate risks, resulting in the establishment of the IDF.

Rowan Douglas CBE, Chief Executive Officer (CEO) of the Capital, Science and Policy Practice at re/insurance brokerage Willis Towers Watson, and who is also largely responsible for the establishment of the IDF, has been named as Chair of the IDF Implementation Committee.

The role will see Douglas, who is one of the original co-founder’s of Artemis, oversee the delivery of programmes and working groups within the IDF, according to IDF Chair Stephen Catlin, who is also Executive Deputy Chairman at XL Catlin.

“This unique project with leaders of the UN and the World Bank Group will be closely watched by all to see that we deliver on our promise to support society’s need for natural disaster risk awareness, risk management, resilience and insurance protection,” said Catlin.

In addition to Douglas’ appointment within the IDF, the organisation has revealed that a number of high-profile, leading insurance and reinsurance industry CEOs have joined the IDF’s Steering Committee.

Furthermore, Mark Carney, Governor of the Bank of England and Chair of the Financial Stability Board (FSB), will also join the IDF’s Steering Committee in his role as FSB Chair.

It’s an impressive list of leading insurance and reinsurance industry players, and along with IDF Chair Catlin, and co-Chairs Joaquim Levy, Managing Director and World Bank Chief Financial Officer (CFO) and Helen Clark, Administrator of the UN Development Program (UNDP), the organisation is now equipped with a wealth of knowledge and expertise to help it achieve its goals.

“Insurers are experts at risk management. These CEOs will bring essential risk management experience to the table, using the same skill set they use to manage their business risk portfolios.

“The risk management expertise will enormously benefit governments since research has shown that a 1% increase in insurance penetration can reduce the disaster recovery burden on taxpayers by 22%,” said Catlin.

By bringing together insurance and reinsurance industry leaders, and with the weight of the World Bank and the UN, the IDF is in a good position to help improve global disaster resilience and ultimately increase insurance penetration in places that need it most.

Increasing penetration, whether through typical insurance policies or the establishment of catastrophe pools and increased mitigation efforts, for example, is vital to building global resilience against climate risks and natural/man-made disasters.

Particularly in poorer countries that are susceptible to natural disaster events, such as parts of Asia, the reliance on government finance and assistance post-event can be detrimental to the growth of the economy and society.

A trend that can be hugely mitigated with increased penetration levels, which, along with better disaster resilience across the globe, the IDF is committed to improving.

“These insurance industry CEOs will commit their time and their staff’s risk expertise to help protect people and property from natural disasters. With their support the IDF can overcome its challenges to accomplish its goals,” said Catlin.

It is perhaps a shame that at this stage no participation is seen from any of the larger insurance-linked securities (ILS) managers. The ILS market could be a provider of efficient capital to back initiatives launched by the IDF, perhaps able to marshal large sums of capital markets financing which could be cheaper and more cost-effective than large re/insurer balance-sheets.

It seem likely that in the future the ILS market will become involved, however it is to be hoped that it is engaged as a partner with a say in the strategic implementation of the IDF’s goals, and not simply a provider of cheap capacity.

As insurance and reinsurance capital is seen as a key tool for mitigating disaster risk and enabling faster recovery, it seems appropriate that what can be the most efficient source is considered in such initiatives.

Read our series of articles focused on the insurance protection gap – under-insurance in emerging and developing economies, the gap between economic and insurance losses, and transferring risk from public sector to private – the opportunity that is on every reinsurance CEO’s lips and which presents the largest opportunity to put excess risk transfer capital to use, requiring both traditional and capital markets support.

A new catastrophe bond has launched to investors, bringing another new sponsor to market, as three United Insurance Holdings subsidiaries...