The U.S. NOAA has officially issued a La Niña watch, saying that “conditions were favorable for La Niña to develop within the next six months.” Meanwhile the Colorado State University hurricane forecast team predict an average season, with a 50% probability that the U.S. faces a landfall in 2016.

In March the NOAA said that the chances of the outgoing El Niño transitioning to La Niña in the second half of 2016 are rising, hence putting out an official “watch” for transition to La Niña conditions to develop later this year. 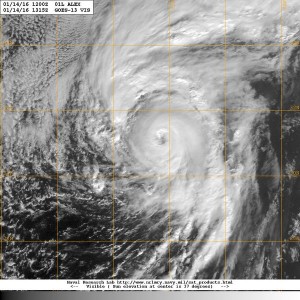 So the transition to La Niña could encourage the development of more tropical storm and hurricane activity in the Atlantic than has been seen in recent years. As we wrote earlier this week, the forecasts so far suggest a more active hurricane season in 2016, than has been seen of late.

Some forecasters also suggest that warmer than normal sea surface temperatures in the Gulf of Mexico and near the U.S. eastern coast could also encourage development or intensification of any tropical storms or hurricanes that find their way towards these areas.

So that all suggests an Atlantic hurricane season with more activity than has been seen in the last few years is possible in 2016.

However, it’s worth noting that the forecast is for average activity, compared to long-term and near-term history. The latest forecast was released yesterday, with the Colorado State University tropical storm forecast team suggesting an average season with a 50% chance of a major category 3 or higher hurricane striking the U.S. coast during 2016.

The Colorado State team of Philip J. Klotzbach assisted by William M. Gray, who are one of the go-to forecast teams for the insurance and reinsurance industry, predict that 2016 will see a season with 13 tropical storms forming, 3 of which will become hurricanes and 2 major hurricanes.

This forecast includes hurricane Alex, which unusually formed in the Atlantic basin in January, so well outside of the typically accepted hurricane season months of June to November.

The Colorado State team give probabilities for hurricane landfalls, a useful way to look at potential for impact to the insurance, reinsurance or indeed ILS and catastrophe bond markets.

While below average those figures are very close and the 13, 3, 2 forecast for tropical storms, hurricanes and major hurricanes is also distinctly average, but as ever it is the chance of a single storm intensifying and striking a major urban section of coastline that is the main threat to insurance, reinsurance and ILS.

For the Caribbean, the probability of at least one major hurricane entering the Caribbean basin is given as 40%, again below the average of 42%.

Putting these factors together, with an average number of storms, the potential for La Niña conditions to develop around the peak of the hurricane season and the fact SST’s may be above normal in coastal areas at the time, could all suggest that 2016 sees a higher potential for insurance or reinsurance industry impact from the tropics this year.

Of course, it is still very early to have any accurate idea of how the season will pan out, but it is important to watch as the forecasts are updated and the information on La Niña gets updated over the coming months.

Klotzbach and Gray also point out the anomalous cool area of SST’s in the northern Atlantic, which as we wrote the other day could influence the ability for hurricanes to form in the Atlantic tropics.

We anticipate an average Atlantic basin hurricane season. While shear- enhancing El Niño conditions are likely to dissipate in the next several months, the far North Atlantic is quite cold. These cold anomalies tend to force atmospheric conditions that are less conducive for Atlantic hurricane formation and intensification.

Adding this 2016 hurricane forecast to the other three we currently list on our dedicated 2016 hurricane season page gives us a new average prediction for 13 named storms to form, with 7 becoming hurricanes and 3 becoming major hurricanes of category 3 or greater strength.

Again, it’s important to note that these long-range forecasts have considerable uncertainty attached to them. As the season nears we will update you with any available forecast updates.

You can track the 2016 Atlantic hurricane season forecasts and activity as the season begins over on our dedicated page.