At the same time, Kemper has also renewed its catastrophe aggregate reinsurance, but with the retention raised slightly for the coming calendar year.

Kemper said it has expanded its excess-of-loss catastrophe reinsurance tower in response to the companies growth, with the additional $75 million of cover commensurate with its expansion.

The insurer said that these enlarged reinsurance limits “align with our risk appetite and minimizes our cost of capital.”

Within that occurrence catastrophe reinsurance tower a significant percentage has been secured on a multi-year basis as well, providing Kemper greater certainty through renewals and locking in pricing for the company.

That included a new 3-year placement of a layer that was 35.67% placed, attaching at $150 million and covering up to $250 million, which was placed at the January 2022 renewals.

Also placed at this recent renewal were the two top layers, which are one-year covers. Details of the XoL tower can be seen below. 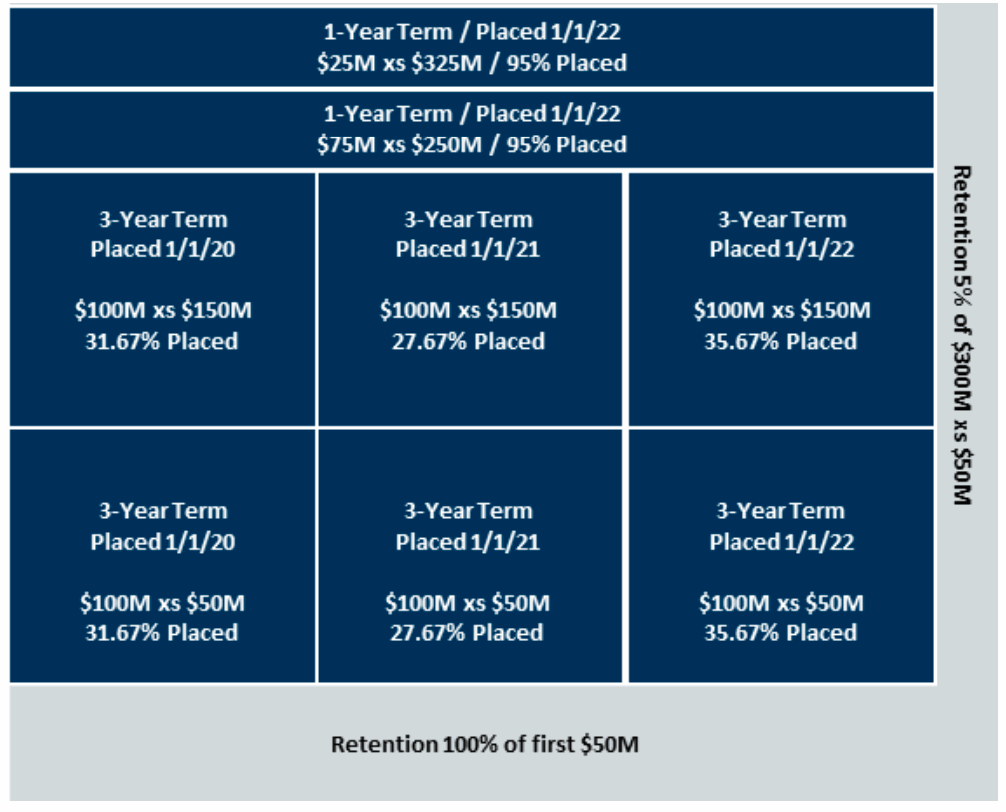 Kemper said that the extended occurrence reinsurance tower now covers a 1-in-200 year occurrence for the insurer.

On the aggregate side of Kemper’s reinsurance program, the insurer has increased its own retention of losses before the aggregate catastrophe protection will attach.

The aggregate catastrophe tower covers all perils excluding named storms and earthquakes, after a $500k per event deductible and provides $50 million of reinsurance above a now $65 million retention.

The retention for 2021 was $5 million lower at $60 million, while the other coverage details remained the same.

Kemper said that the increased retention is, “Intended to reduce volatility from high-frequency, low severity events.”

Overall, Kemper said that there was only a minimal change in the total costs of its reinsurance program in 2022, compared to the prior year.

The insurers practice of securing a significant proportion of its occurrence tower on a multi-year basis will have been a significant factor in moderating price increases for Kemper, demonstrating the importance of taking a long-term view on reinsurance pricing.