Typhoon Kammuri is eyeing the Philippines with the potential to intensify into a super typhoon just days after the launch of the country’s first catastrophe bond that provides it with $150 million of tropical cyclone disaster insurance protection from the capital markets.

Updated Thursday Nov 28th: Kammuri has now become a typhoon and the majority of forecast models continue to predictin an intensification of the cyclone and some showing an intense typhoon approaching the Philippines eastern coast next week. Once it enters the Philippines area the storm may be locally named Tisoy.

Some of the forecast models expect a relatively rapid intensification as the typhoon crosses the Pacific towards the Philippines,  perhaps peaking at anywhere towards a category 4 equivalent storm as super typhoon Kammuri with sustained winds as high as 145 mph.

Then, around Tuesday December 3rd, typhoon Kammuri is shown by some forecast models as just offshore, but moving much more slowly, as a still large and dangerous storm, threatening to make a landfall in the Philippines.

The image below from the JTWC shows the forecast track and intensity for Kammuri, currently (as of Nov 28th) showing it peaking at around 130 knots (150mph) sustained winds with higher gusts on route to the Philippines.

As you can see typhoon Kammuri is expected to follow a northerly path for a day or so, before then turning to head west on a direct path for the Philippines.

The Philippines government has just become the beneficiary of $150 million of tropical cyclone insurance protection backed by the capital markets through its new World Bank issued catastrophe bond, the $225m IBRD CAR 123-124 which also provides $75m of earthquake protection as well.

The Philippines cat bond uses a modelled loss trigger, meaning after a catastrophe event strikes the country the calculation agent AIR Worldwide will run its models to analyse the event and derive a modelled loss figure, based on pre-defined post-event loss calculation procedures.

In the case of typhoon Kammuri, at the moment it looks like the storm would need to intensify much further than the forecast models are suggesting in order for the new Philippines catastrophe bond to actually be troubled.

But, some models do show typhoon Kammuri’s low pressure deepening considerably, down to as low as 918mb according to recent ECMWF runs which show an intense typhoon on the Philippines doorstep. Which while not Cat 5 territory, could still be a damaging storm for the Philippines if it makes landfall.

The image below shows an ECMWF forecast model run for Tuesday, December 3rd from TropicalTidbits.com. 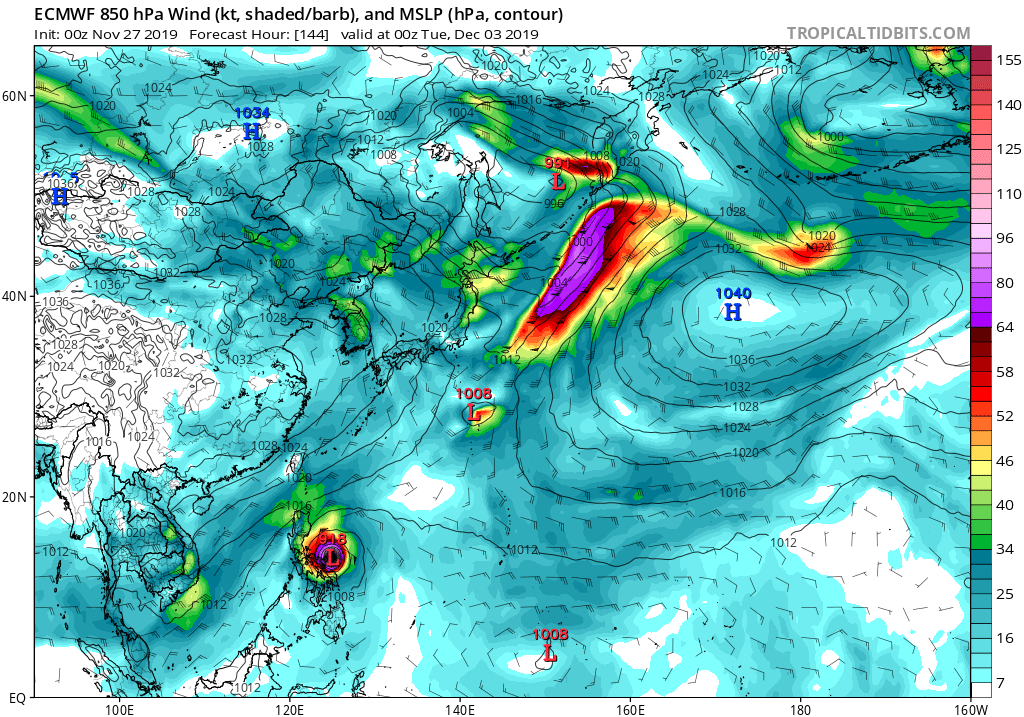 For a forecast model comparison, the below is taken from the HWRF model run for Monday, December 2nd, again from TropicalTidbits.com. 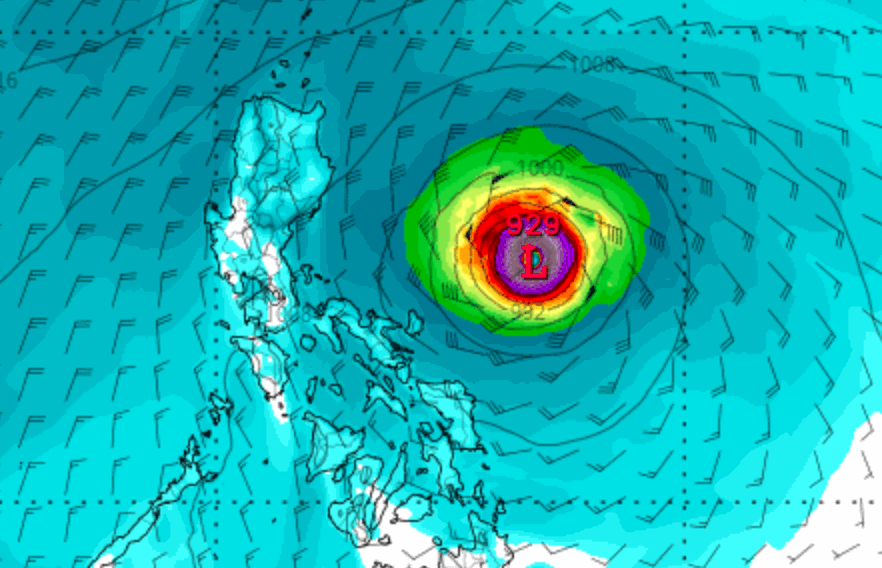 From the above, you can see that the HWRF model is running further north for the track of typhoon Kammuri, while some other forecast models are showing the typhoon curving and missing the main Philippines islands altogether, perhaps only making a glancing blow with its outer rain bands.

At this stage, five or six days out from a close approach to the Philippines, there is a high degree of uncertainty in any of these forecasts, with no certainty over whether it will reach a significant typhoon strength status, or approach the Philippines and make landfall.

The trigger for the Philippines catastrophe bond is calibrated in such a way as to respond to the most severe of typhoon impacts, we understand.

One source told us that, in the historical modelling analysis for the cat bond deal, the only storm in the catalogue that caused a high enough modelled loss that would have resulted in a payout was 2013’s typhoon Haiyan, a monster category 5 super typhoon that made direct landfall and even that would only have caused a partial 35% loss of principal.

Hence, for typhoon Kammuri (Tisoy) to result in a loss to holders of the new Philippines catastrophe bond, the storm would likely have to intensify much more than the forecast models currently suggest and also make a direct landfall.

That remains very uncertain at this stage.

But it is a storm to watch and coming so quickly after the catastrophe bond was successfully issued it will provide a reminder of the purpose of cat bonds and disaster risk financing, as well as the importance for investors to be fully-aware of the catastrophe-exposed nature of this asset class.

You can read all about the landmark Philippines catastrophe bond, the IBRD CAR 123-124issuance, in our comprehensive catastrophe bond Deal Directory that includes details on over 600 transactions.